The albies are taking their sweet time getting into Long Island Sound this year. They've been around the Cape for a while now, and in Rhode Island for at least a week. I know a few pods have wandered into CT waters but not enough to reliably go out and find them. For me, the lack of albies hasn't been a disappointment. They typically out-compete the other pelagic species and push them out of the sound, though in years past there'd often be another shot at bonito right at the end of the hardtail season. So for at least a little while longer, there are bonito around. But of greater interest to me is the even less frequent visitor to CT waters that has showed in force this early fall: Atlantic Spanish mackerel. In three trips to Florida I'd never really gotten a shot at Spanish, despite having been in a lot of places they'd be likely to show up. This year they started appearing along New Jersey in late June. Then on Long Island, Cape Cod, the islands, Rhode Island in August. At the start of September some had made their way into Long Island Sound. I kept missing the bite though or just not making it to the shore on good days. I was worried that Dorian would push the albies in had and I'd miss my chance. Turns out, it actually pushed more Spanish mackerel in instead. Two days after the storm passed Noah and I set out in search of scombrids not really knowing exactly what we'd find. Before we even launched though we could see bonito and Spanish leaping and breaking. Between staring at the water and rushing to get out there, I'm not sure how much time we wasted. But I do know that we both got bonito on pretty much our first casts. Mine absolutely ripped off, putting up the hardest fight I've had from a bonito, almost making me think it might be an albie or at least a much bigger bone. It ended up just being the same small size fish that we've had around. 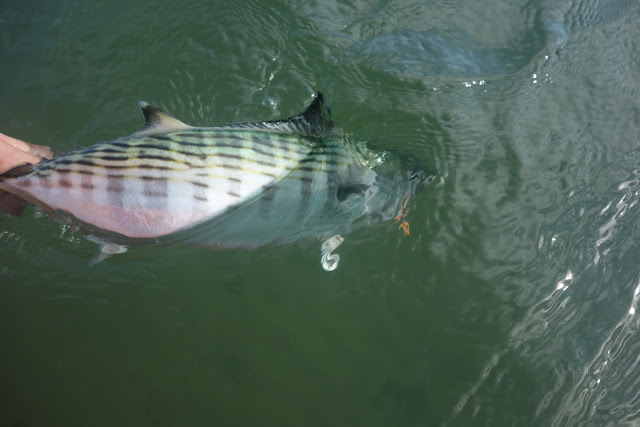 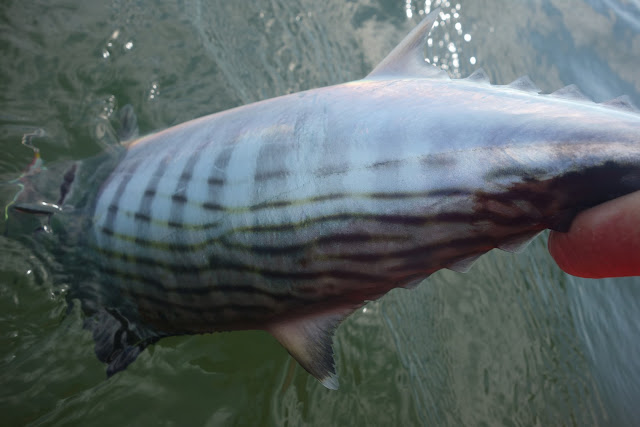 These fish were actually in quite shallow water, ambushing a school of silversides that as holding over a patch of eel grass. We could see the grass patch, which was excellent because it afforded us the opportunity to stick to that spot and just wait for the hardtails to come blasting into the bait again. Noah hooked up next, and it was a Spanish mackerel. Of course the guy who has already caught the species is the one that gets the first one of the day! 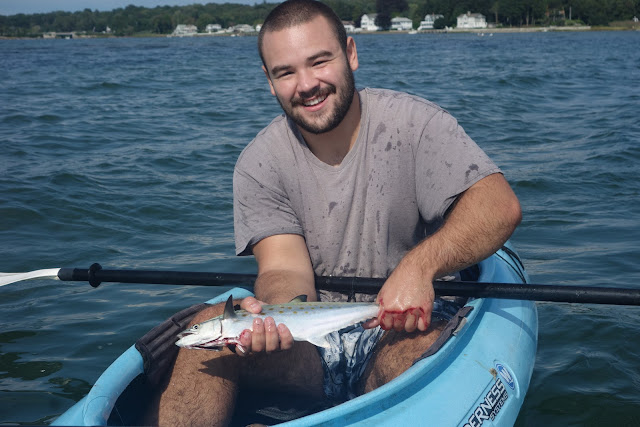 I wasn't too worried  though as the short chaotic blitzes kept erupting over our little grass patch. Often, these fish were less than five feet from us. It was wild and beautiful. 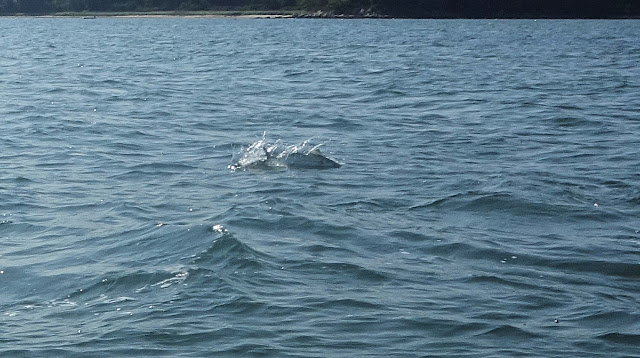 I hooked up next and of course it was another bonito. I was starting to worry. Little did I know, by day's end I'd have more of that species than I'd ever have thought I'd get a shot at in CT waters. 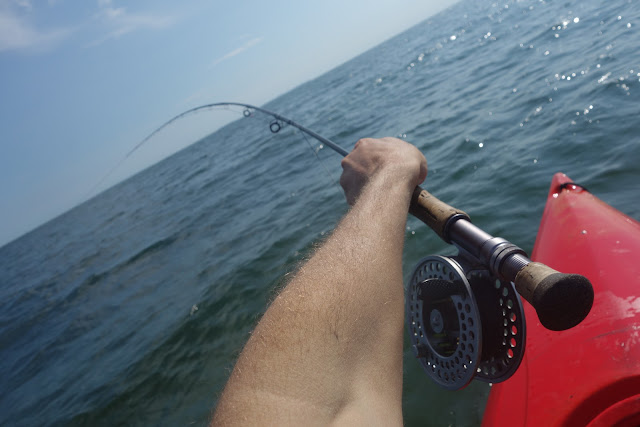 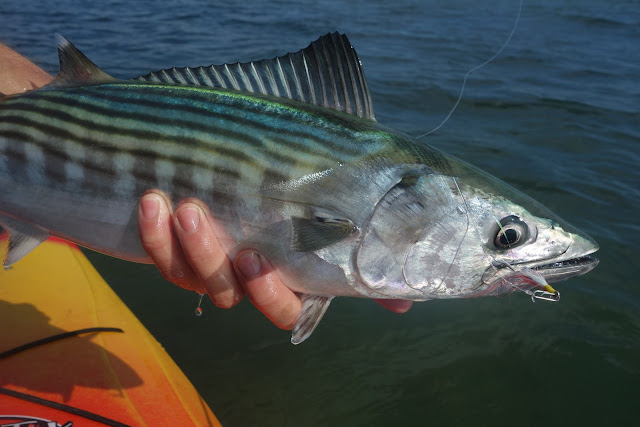 Our grass patch bite kind of fizzled out eventually, and we moved out into deeper water where we'd seen fish before. As we did so I glanced southwest and saw a cloud of birds. We hurried in that direction and in a short time I could see the fish breaking. We got there just in time for the action to fizzle out, of course. I decided to hang around there for a bit though as I'd encountered clouds of bait in the same area every year, seemingly for no reason at all but always in the same small patch of deep water. Noah decided he wanted to go check out another spot. I decided to stay. It wasn't that long after we'd parted ways when the fish came back up again. I got into them fairly quickly and hooked up to the third bonito of the day. As I fought that fish the school basically followed me, blowing up at arms reach all around my kayak. I boated and released that bonito as quick as I could and was hooked up again on the very next cast. 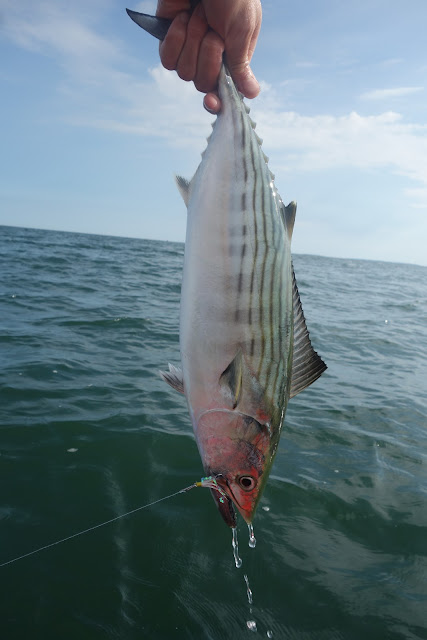 Noah got back over just in time for one brief shot at the bonito, and then they didn't come up heavy again for a while though there were stray boils and leaps. We blind cast, and both got takes from what were almost certainly Spanish, then again I looked Southwest and saw birds. Again Noah and I headed different directions, but by this time things didn't really get going hard until he caught back up to me and now it was all Spanish. I finally added this wacky, beautiful species to my lifelist.

After that fish the floodgates opened. Noah and I hammered Spanish for the rest of the evening. It was incredible hardtail fishing. This ended up being far and away the best day targeting scombrids I'd ever had. We both caught tons of Spanish. I very quickly learned that, unlike bonito which have rounded teeth, Spanish mackerel have quite sharp teeth. They destroyed my flies and damaged my leader. 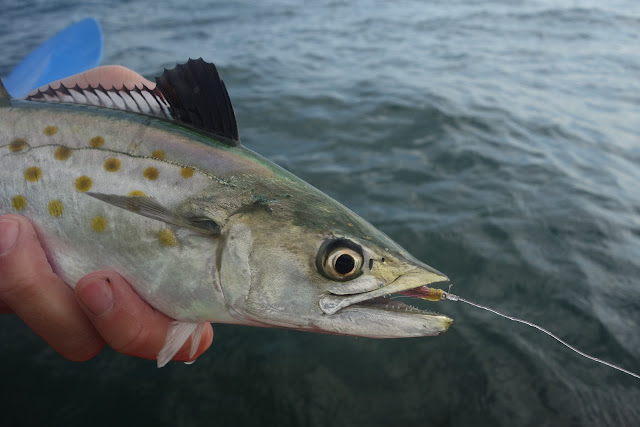 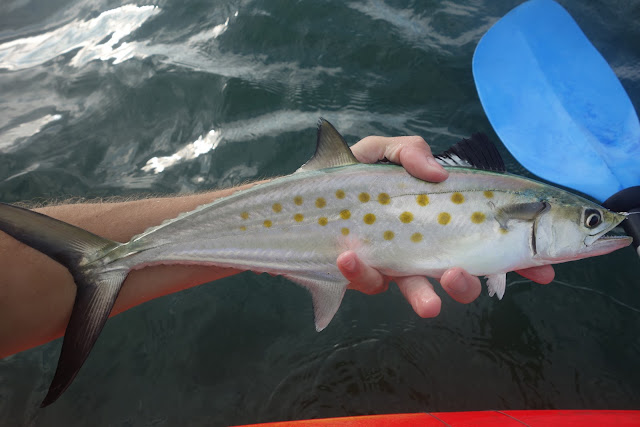 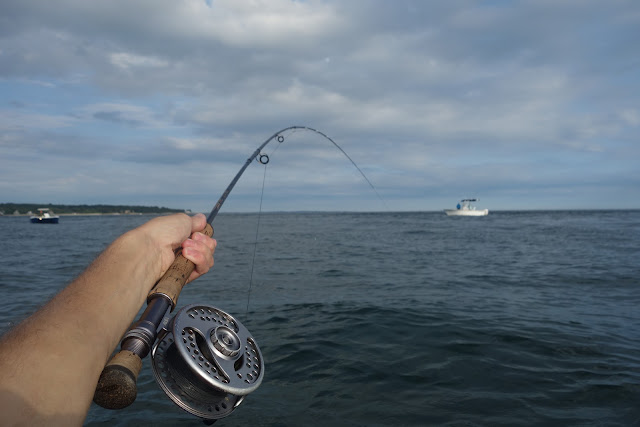 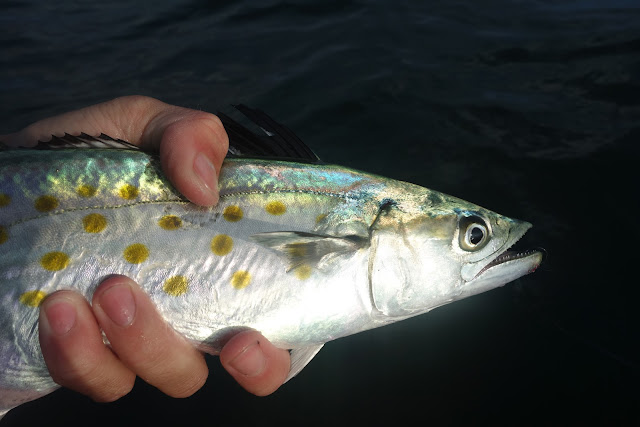 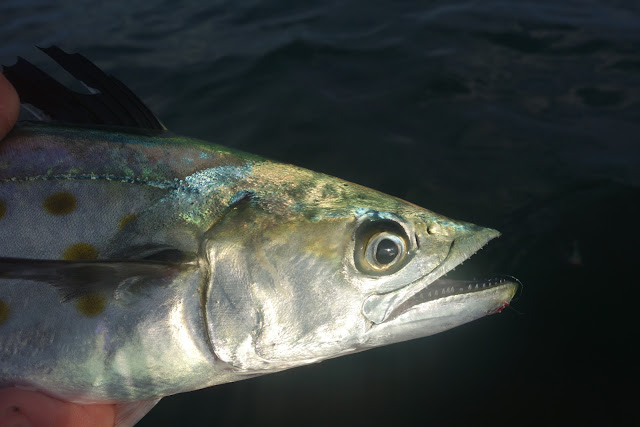 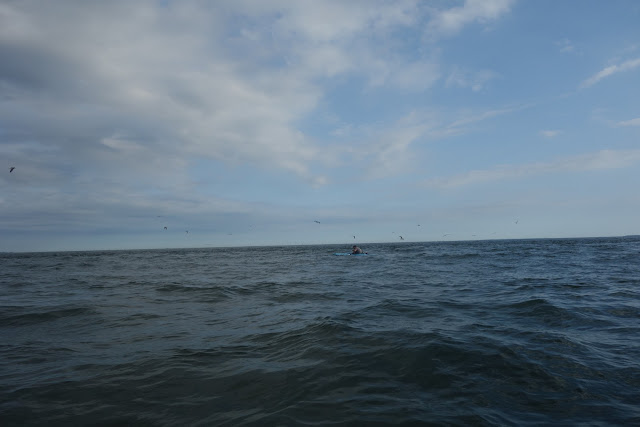 These were only little ones unfortunately so they weren't really that good a fight on a 10wt, frankly the bonito kicked their butts and they aren't that impressive either. We pretty much left them chewing in that spot for our own safety as the sun set. I got one striper and a couple bluefish on the way back in, and we shark fished after dark, but it wasn't anything to write home about. It did mean I didn't get much sleep though, so I was pretty tired when Rick and I headed out to fish the same area the next morning. The conditions were different, and though they were behaving a bit differently the fish were still there. The fly rod proved to be the winning tool this time, far out performing spinning. 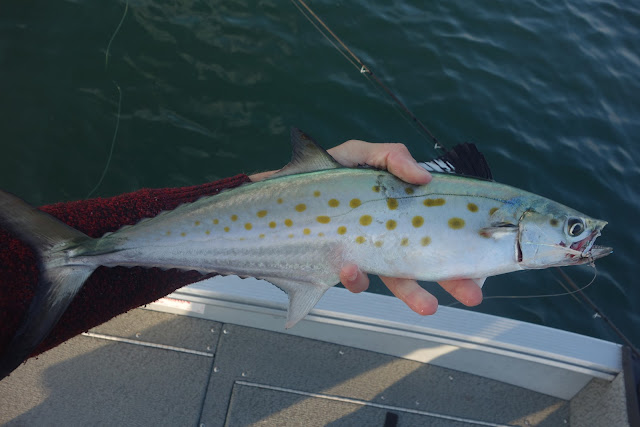 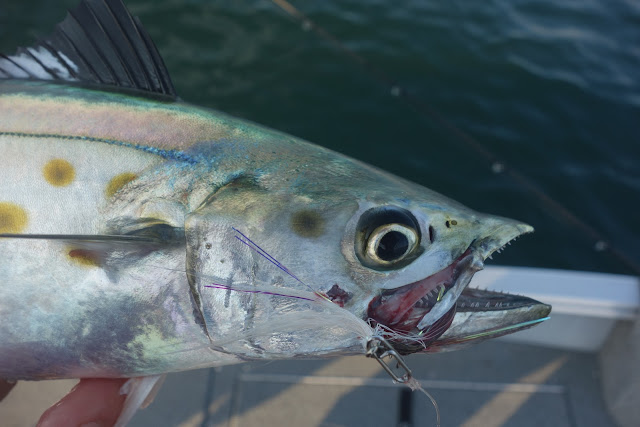 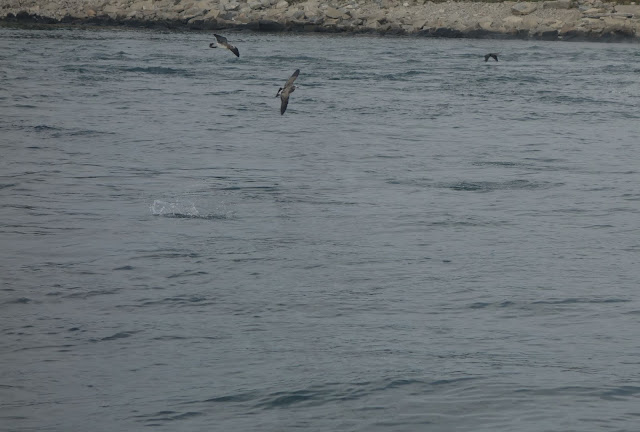 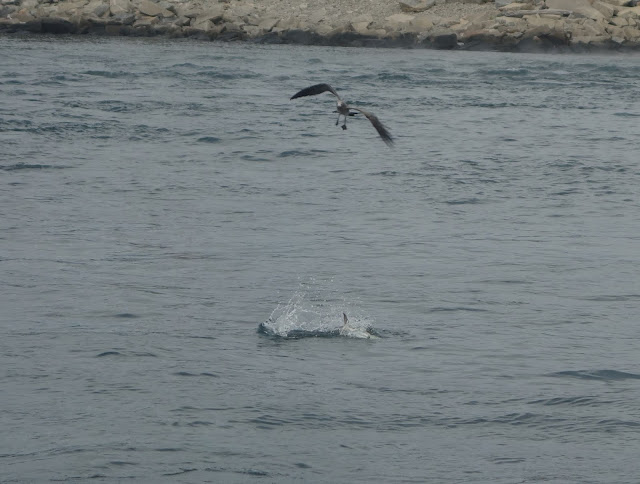 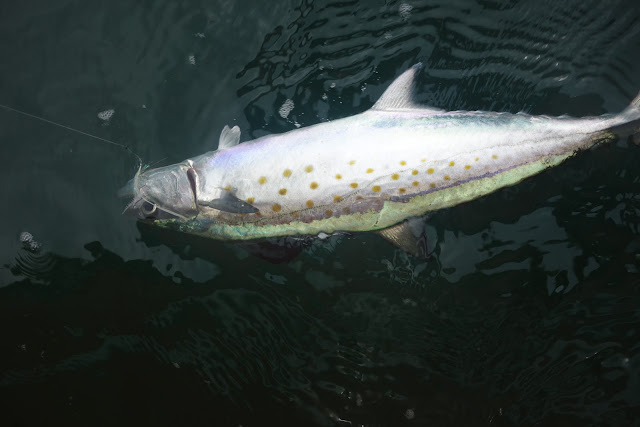 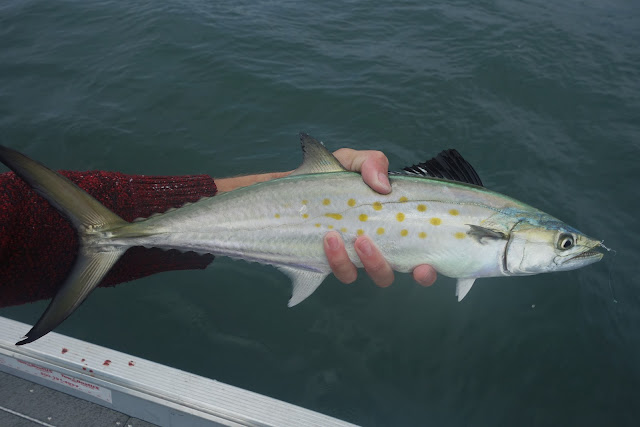 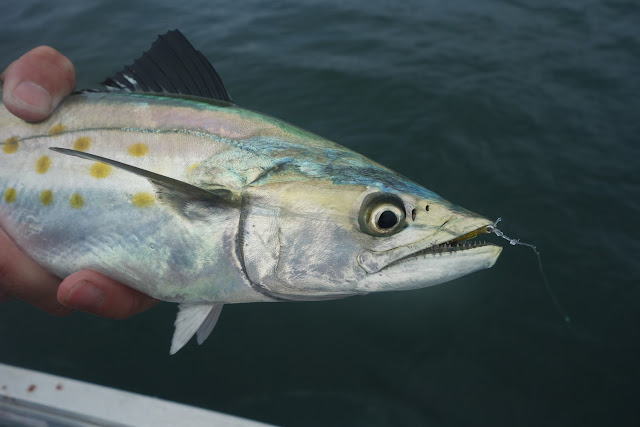 This time, a few went in the cooler. I botched the 2nd fillets a bit on the first and second fish. The fist fish especially. But the meat was remarkably white for a hardtail. These fish have got Bonito beat in terms of food quality, at least by my tastes. Broiled they were delicious. I might try some pan seared next time. 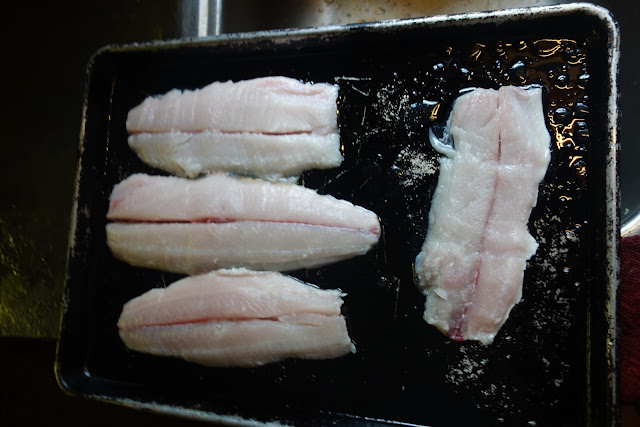 If you enjoy what I'm doing here, please share and comment. It is increasingly difficult to maintain this blog under dwindling readership. What best keeps me going so is knowing that I am engaging people and getting them interested in different aspects of fly fishing, the natural world, and art. Follow, like on Facebook, share wherever, comment wherever. Also, consider supporting me on Patreon (link at the top of the bar to the right of your screen, on web version). Every little bit is appreciated! Thank you to my Patrons; Erin, David, john, Elizabeth, and Christopher, for supporting this blog.
Posted by RM Lytle at 9:06 AM