Millions of unseen insects provided a soundscape fitting for the environment Noah and I were now venturing into. high clouds interrupted what little remaining sunlight was left and night in the Everglades was about to begin. It was still hot out but cooling down quickly, and it was time for reptiles to move. After dark in the swamps, grasslands, and forests of Florida, snakes leave their hiding places to hunt and travel. Driving slowly down back roads we hoped to encounter reptiles simply crossing on there way somewhere or using the remnant heat of the road to maintain their body temperature as the air cooled. Cruising at a snails pace, I hung out the passenger side window, holding onto the roof rack for stability and trying to get a clearer view unimpeded by the windshield. 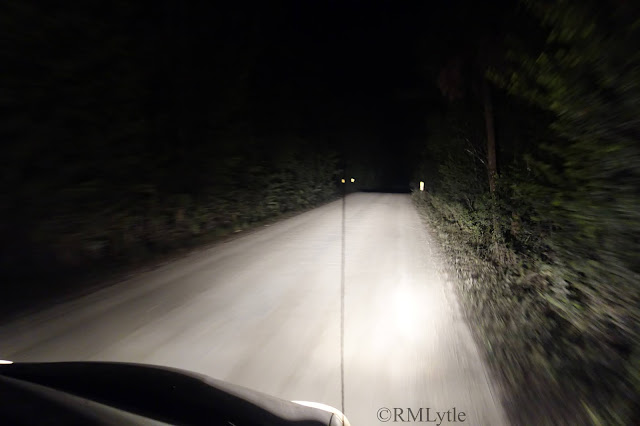 It wasn't very long before I spotted a snake, a long skinny yellowish one, just on the right edge of the road. We hopped out to check it out. It was a yellow rat snake, which, though visually exceptionally different from our CT black rat snakes, is actually the same species,  Pantherophis alleghaniensis or the Eastern rat snake. This individual, like our black rats at home, was a pleasure to handle but a pain to photograph. It never stopped moving and climbed all over me, which is fun, but makes nighttime photography essentially impossible. I got some voucher shots but nothing especially artistic. 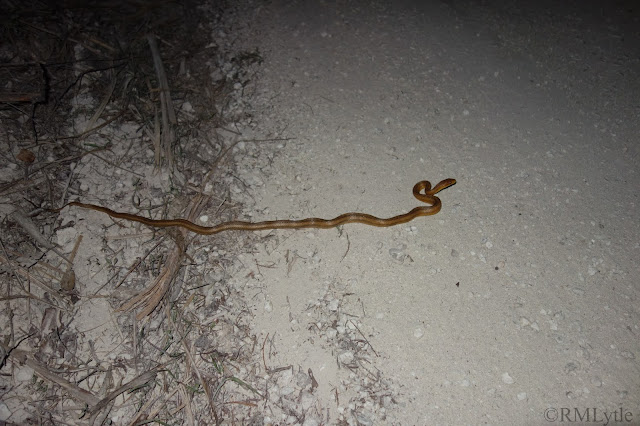 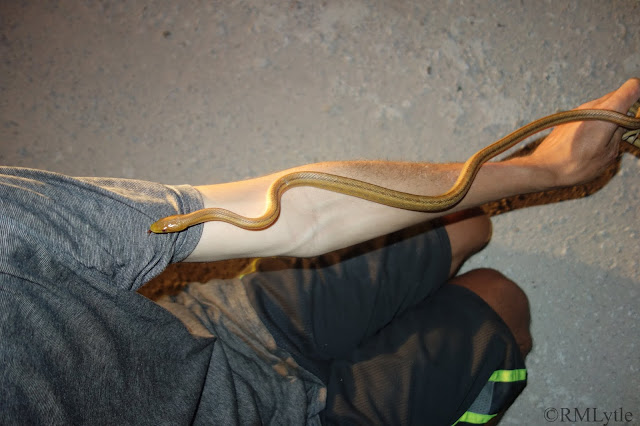 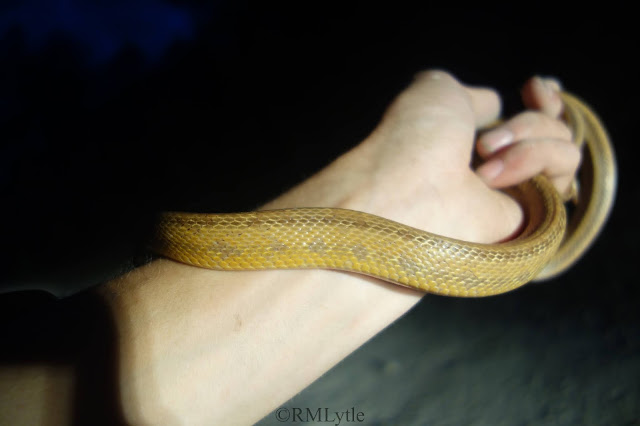 We continued down the road expecting to find more snakes fairly quickly given how fast we found the first, and we did find frogs without covering too much more ground but it was a while before we saw another snake. The first frog we found was somewhat ambiguous but may be either a squirrel tree frog or an American green tree frog. I'd lean towards squirrel tree frog but I really don't know for sure. 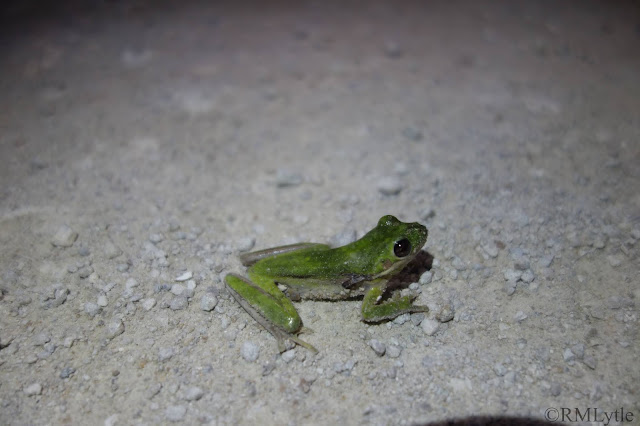 The next snake we found, Noah spotted. It was a quite small one and had it not been moving it would have been very hard to spot. It was another more common species, but a colorful one and this time something I'd never seen in the wild, a corn snake.

This little juvenile cornsnake was equivalent to stumbling upon a gemstone... and I've done that too so I know exactly how both moments feel. I've been around a lot of snakes throughout my life and I understand the latent genetic response of fear that the sight of a slithering snake elicits in the human brain, and I at times still get very nervous around venomous snakes under certain circumstances. But what I don't get is that some of the same people that would want to pet a rabbit would have nothing to do with that beautiful little non-venomous corn snake. It makes no sense to me. I've been bit be rabbits, squirrels, cats, dogs, and many other animals far more widely liked, and it's a much less pleasant experience than being bit by a small colubrid snake. These irrational fears come from ignorance and lack of experience... spend two minutes holding one of these corn snakes and it's impossible for it not to charm you just a little bit.

After ushering that stunning little corn snake off the road we ran into toadville. Southern toads have a handful of distinguishing characteristics from American toads but don't look different enough to for the untrained eye to see much unique about them. Whereas the same species of snake I'd been seeing my whole life turned up earlier in a form I'd never seen, now a new species of toad was in front of me that looked superficially like every other toad I'd ever found. 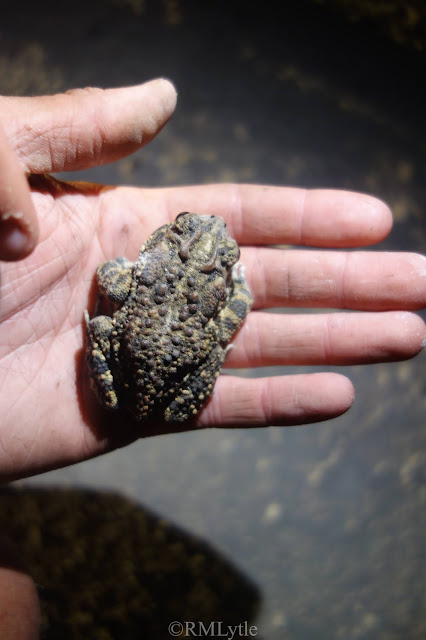 Weirdly, people manage to find ways to be disgusted and scared of toads too, but soon we found the most unfairly maligned species of the night. The bulky body and head raised stance were tell tail, we had found our first cottonmouth, or water moccasin. I already wrote a post to dispel some of the myths about this species, find that here: The Myth of Agressive Snakes. But even I, having already been around lots of timber rattlesnakes an even handling copperheads, was a bit surprised by how generally relaxed and well behaved these were, the third species of pit viper I'd encountered in the wild. The first cottonmouth Noah and I found was not polite enough to stick around but didn't want anything more than to get away from us quickly. I failed to get any high quality images of this flighty snake.... 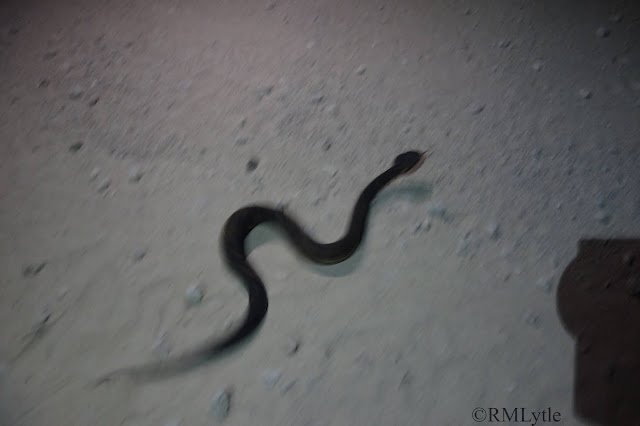 We went a good many miles then without success. We found a roadkill ribbon snake and missed what was almost certainly another yellow rat snake, but it wasn't until a while later, when we happened to meet two more cars of herpers and an adult corn snake at the same moment that our luck again improved. We chatted for a bit, photographed the snake, then continued our separate ways. It was a fun little chance encounter in the middle of the Everglades at night. 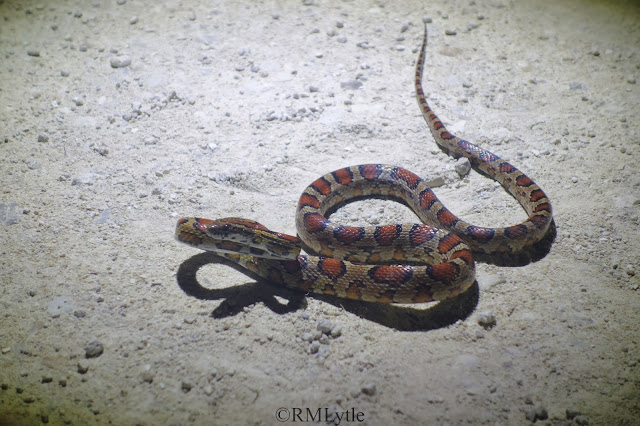 I really wanted to find a colorful cottonmouth that was willing to sit still for me to get some great shots of it, and that's exactly what our final snake of the night turned out to be. It didn't posture, it didn't gape, it didn't strike... this gorgeous little moccasin just sat still with its head raised and let me shoot away until it was time to leave and usher him out of the road. It was perfect, and common though these snakes may be in the area I was thrilled. 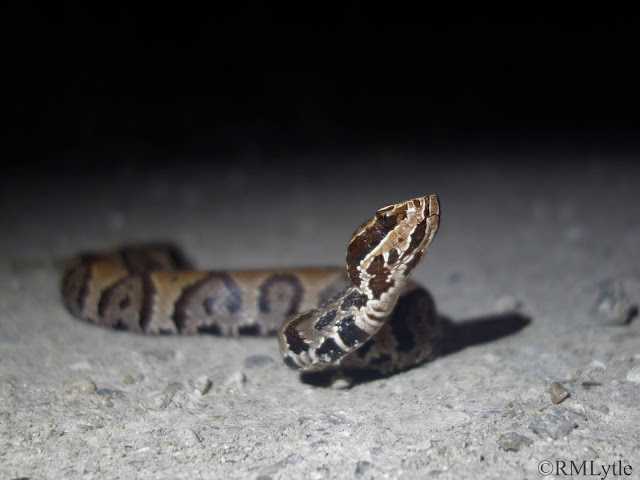 Fish aren't all that I live for, and though they were probably the biggest draw of the Everglades the snakes were a close second. Unfortunately, years of development, indiscriminate killing, and collecting have diminished Florida's snake populations so much it's just a shadow of what it used to be. I was so thankful to have gotten to see the snakes we had on that firs night, and was excited for the days and nights to come.

Thank you to my Patrons; Erin, David, John, Elizabeth, Brandon, Christopher, Shawn, Mike, Sara, Leo, and Franky for supporting this blog on Patreon.
Posted by RM Lytle at 11:37 AM