My love for reptiles and amphibians runs deep. I can't remember a time when I wasn't captivated by frogs, snakes, salamanders, crocodilians, you name it. It certainly runs deeper than my fascination for fish. Herpetology was my first love, Ichthyology not even my second or third, so there are amphibians that I've wanted to see as long as I can remembered, but not fish. One of those amphibians is the largest Salamander in North America, the hellbender.

The largest salamander in the world might be the South China giant salamander, Andrias sligoi, with one specimen collected in the Guizhou Province measuring a stunning 5.9ft in length. Because biology is a sloppy science, the South China giant salamander was lumped in as non-distinct and then forgotten. It was then revived as a distinct species when genetic research in 2018 proved that the Chinese giant salamander was not a distinct species, but a collection of clades divided among different river drainages, some of which were distinct enough to get species designation. Because the largest specimen of Chinese giant salamander could be A sligoi, but genetic material is not fresh enough to test, it remains a mystery which species the record breaking specimen is. A. sligoi and A. davidianus are critically endangered and it isn't even known if A. sligoi exists in its native range anymore. The Chinese affinity for using basically any animal for medicine or for food has driven these incredible and important animals to the brink, and continues to threaten their viability to this day.

In Japan, the native Adrias japonicus , the third largest salamander in the world, has enjoyed better protections in recent history but is still listed as near threatened. The largest wild specimen was 58lbs and 4.5ft long. Thankfully Japan has recognized the biological an cultural significance of their giant salamanders and are better equipped to protect them than China is with their own. It seems likely that the Japanese giant salamander will be around for years to come.

A fourth species of the giant salamander family (Cryptobranchidae) lives in the eastern United States. The hellbender, Cryptobranchus alleganiensis, is the largest amphibian in North America and possibly the fourth largest salamander in the world maxing out at well over two feet. It, like it's Japanese relative, is listed as near threatened, and Pennsylvania is one of the last best places to see the species and the only state where it doesn't have special protections (and that's very stupid, it should, but PA is slow about this stuff... they still allow timber rattlesnake hunting, after all). Though I'd lived right smack dab in the middle of hellbender country for years and spent countless hours exploring streams where they live, I'd never seen one. So when we all woke up on the first morning of our trip and groggily got ready for a long day on the water, it didn't cross my mind that I'd have a good chance at seeing one that day.

We headed straight to the river I'd seen the muskies and Moxostoma in the evening before, each of us prepared to target both, as well as micros. As we walked down some railroad tracks to the spot, we saw the first herp of the day, a DeKay's brown snake making a morning move. 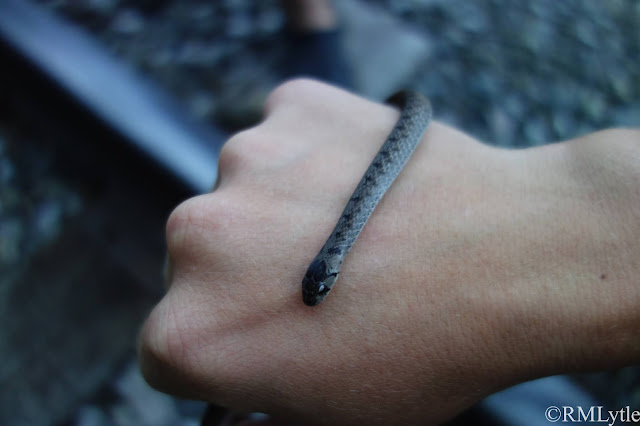 I had my 8wt rigged to indicator nymph and 10wt rigged to throw big streamers when I hit the water. I bumped spot to spot with one rod tucked under my arm, casting with the other, alternating methods. I then settled in a good looking run for a little while and nymphed it hard, hoping to dredge up something interesting. The first fish was a little smallmouth and so was the second, but the third was a silver shiner than somehow managed to drop my indicator with quite a bit of force.

It became clear very quickly that the redhorse I'd seen all over this creek the day before were being far more shy this morning. I was seeing a few flash, but I sure wasn't getting eats and I wasn't even getting much in the way of takes from other fish. Jake got a log perch and his lifer river chub, Noah was getting the odd bass and chub, but the muskies and redhorse were being cold and distant. With the muskies that wasn't at all surprising, but I didn't know to expect it from the Moxostoma. 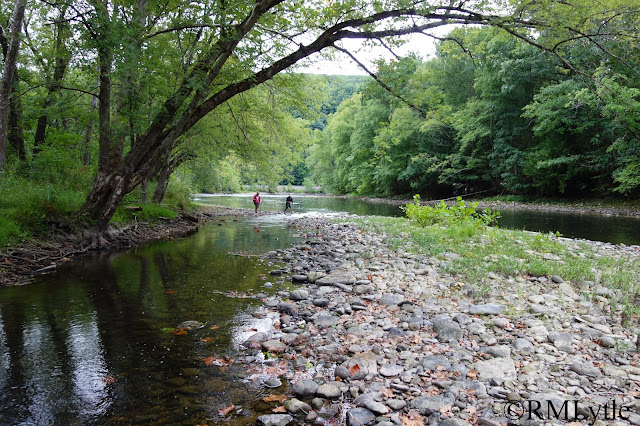 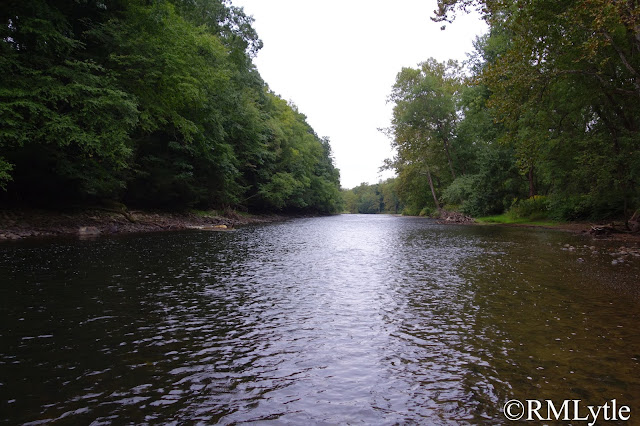 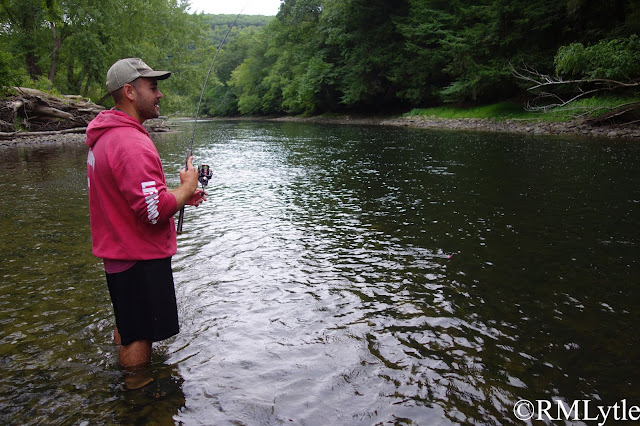 We wandered upstream a ways, then started back down after deciding we weren't especially likely to find anything different above us. In the spot I'd seen the muskies, we found a small pike. I got it to exhibit interest in a big black muskie fly but couldn't get it to eat. There were schools of minnows and shiners holding along the same weed edge though, and we started fishing to those. That's how I got my first lifer of the day and my second Luxilus species, and my favorite species of the genus, the striped shiner. Colored up male striped shiners are one of the most beautiful freshwater fish in the world. I have a watercolor taxonomic painting of one hanging on my bedroom wall. This one was a dull female outside of spawning season, but still a gorgeous little fish.

Jake and I were catching a bunch of river chubs out of this spot, and eventually I hooked a pretty good one. 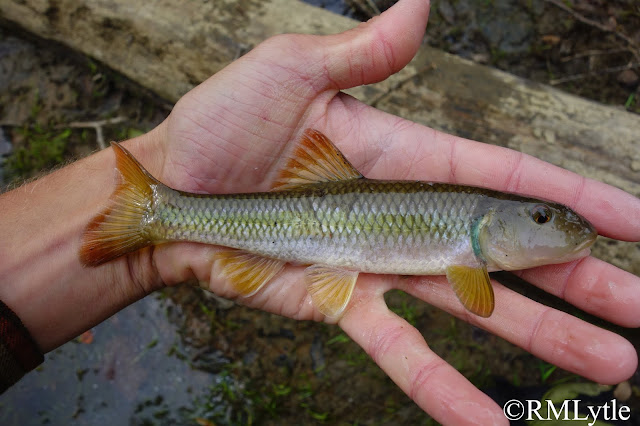 We headed back downriver to the same run I'd really pounded on my way upstream. We all went over to the opposite side, Jake and I stayed in the run, Noah headed downriver. I parked myself on a big slab of sandstone with a deep pocket in front of me and nymphed it hard, pulling one smallmouth out. Then Jake hollered that he had some unusual amphibian eggs in front of him. I waded over and it was true, these were some large and odd shaped eggs I'd never seen before. They did have some hallmarks of salamander eggs, but huge ones, and all we could think was that they were a hellbender's They looked in awful conditions though, certainly not alive, but there were a few good rock slabs around and I decided to gently lift one. As I did so, a huge cloud of mud erupted from it and a long brown animal roiled out and vanished. Jake felt it bump his legs but it was completely lost in its own smoke screen of disturbed mud and detritus. We began searching around for what we were now sure must be a hellbender. I saw something roll on the surface in some shallow weedy water a few feet away from me and headed to it, feeling around with my hands. Suddenly there was a commotion behind me and Jake yelled "I got him, HELLBENDER!". I whipped around to see Jake with the largest amphibian I'd ever seen writhing in his hands.  We shouted down to Noah and quickly moved the animal into shallow water where we could control it more safely. Noah rushed up. All three of us have interest in amphibians and reptiles. Noah and I have done night drives on rainy spring nights looking for migrating amphibians and looked for snakes in the Everglades. Jake is a herper and has been for a long time. We all understood how special the animal we were looking at was. 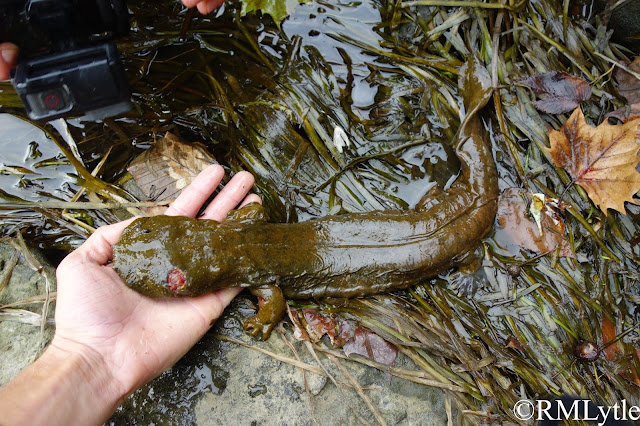 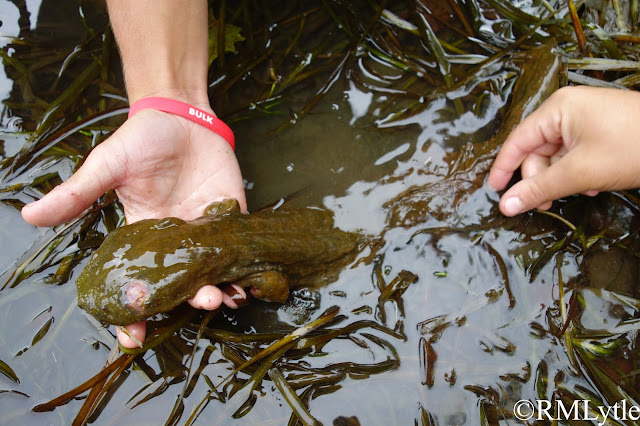 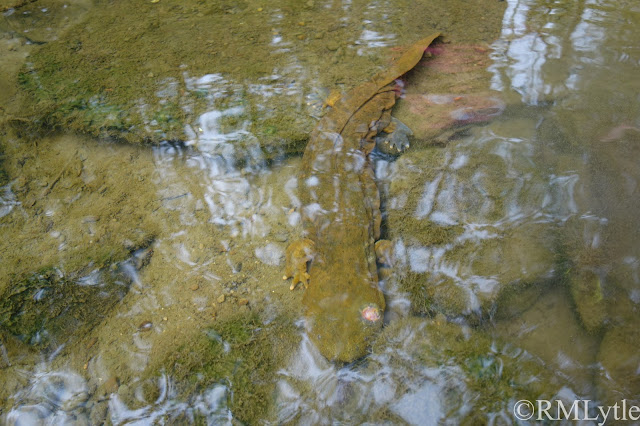 The small wound on this individual's head was unfortunate for photography, but amphibians have the most remarkable ability to heal, and undoubtedly this wound is but a small scar now as I write this. I was in love with everything about this bizarre creature. It's tiny eyes, it's folded, smooth skin, it's remarkably large hands... this was nothing like any animal I'e ever seen, let alone held. Some might find it ugly, some might even be scared of it, but anyone that find themselves drawn to amphibians dreams of seeing any of the giant aquatic salamanders. These animals can live as much as thirty years, and they are just so big... there's really nothing like that experience. To me it was akin to seeing my first timber rattlesnake, another species that draws a very real, very visceral response from everyone that gets to see one in the wild. There's a number of animals that stick with me in the same way this hellbender did, animals that I can honestly say changed my life. It takes something special, and it's personal too. Black bears and moose didn't do it for me, though I'm sure they have for many others. It may seem crazy that this salamander shook me up that much, but you know what? If you don't get that, either you haven't seen one and you will get it if you do, or you're not the sort of person I could get along with, simple as that. Noah and Jake though got it, the understand. There's no two people I would rather have been with at that moment in time. We were all just in awe of this animal.
As we watched it swim/walk/crawl back into it's stony lair, we knew this day had peaked... it couldn't get any better. We fished a bit longer there but then started to make our way back to the car. On the way, I flipped a piece of shale along the railroad track and there was an odd looking garter snake under it. Research seems to indicate that this was a shorthead gartersnake. Jake found a few eastern garters the same size under another rock and the differences were striking. The shorthead had a stouter head (of course) and no checkering pattern at all. I may have seen one of these when I was young but I wouldn't have known it, so for all intents and purposes this was my first.
Jake then flipped another rock with four snakes under it, and two were stunning adult Northern redbelly snakes, a species I'd been trying and failing to get good photos of in CT all season. I'd seen two and photographed one small, in shed juvenile, but these two were the sort of individuals I really wanted to photograph and they could not have been more different looking. It's amazing that these two individuals of the same species were found under the same rock. 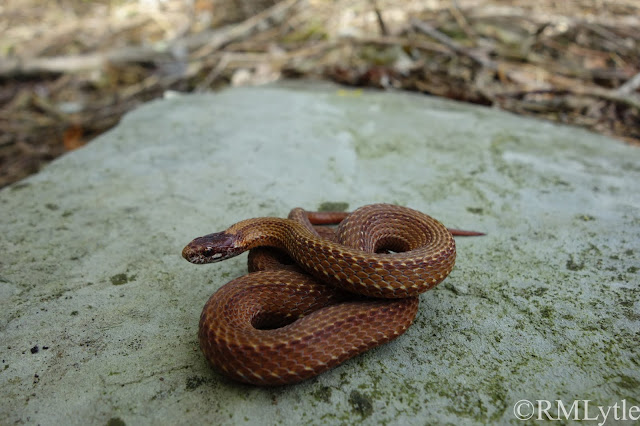 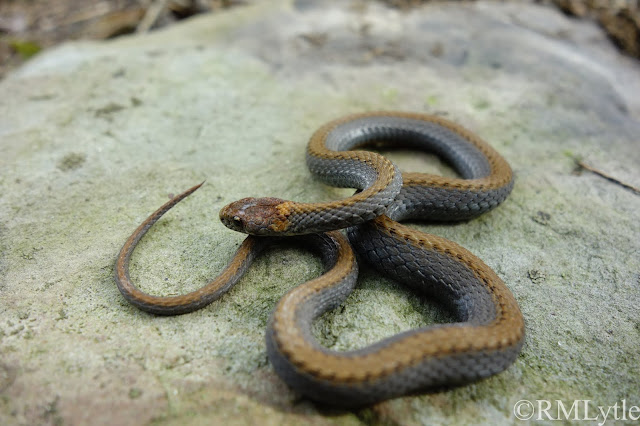 So it had been a slow morning of fishing but an incredible one for herping... we could only guess how the rest of the day might go. It seemed that just about anything could be possible on this trip.
*If the conservation and protection of hellbenders and other species that use the same habitats is of interest to you, take initiative in keeping streams natural. Rock stacking, small dam building and other such seemingly low impact activities have huge consequences on such species. Actively dismantle such structures when possible and discourage people from altering stream structure in such ways. in addition, please vote for leaders that support strong clean water, clean air, and environmental protection policies in local and national elections.

Thank you to my Patrons; Erin, David, John, Elizabeth, Brandon, Christopher, Shawn, Mike, Sara, Leo, and Franky for supporting this blog on Patreon.
Posted by RM Lytle at 6:59 PM