Lake Ontario's native Atlantic salmon went extinct in the 1800's, for much the same reasons salmon all over the East Coast were suffering: dams, pollution, and overfishing. As seems to be human nature given just about any and all similar cases turn out the same, those in charge of such things immediately started trying to replace those Atlantics with something different. These attempts included the first stockings of Pacific salmon in Lake Ontario. These early attempts to establish cohos and chinooks failed, but hope was never truly lost, and when the extirpation of lake trout in the middle of the 20th century resulted in a huge boom and overpopulation of alewives the stockings again commenced. By 1974 a run had been established in New York's Salmon River.

The early years of this fishery were, to put it politely, an absolute shit-show. People didn't believe the fish would voluntarily take a lure or bait, so they deliberately snagged them. Though already illegal and widely considered unfair chase on most waters, it remained common practice on Lake Ontario tributaries where salmon runs occurred until 1995. Fear of economic impacts to the now wildly popular fisheries was surpassed by the overwhelmingly obvious problems with such an unethical practice. Illegal activity, fist fights, harvesting salmon eggs for profit, and other such behavior were rampant. The snagging ban inevitably did cause a decrease in fishing effort but over time, as people discovered that the fish could indeed be caught on flies and bait if targeted the right way, it once again boomed. It is estimated that $201,000,000 is spent by anglers fishing the Salmon River annually. And though things have gotten more civilized, there is still a lot of buffoonery. My friend Rick invited me and fellow fish head Charlie to join him on a trip during the peak of the salmon run. We'd spend one day fishing the public water and two on the private Douglaston Salmon Run, giving us the chance to see both the chaotic and the more civilized side of this fishery. 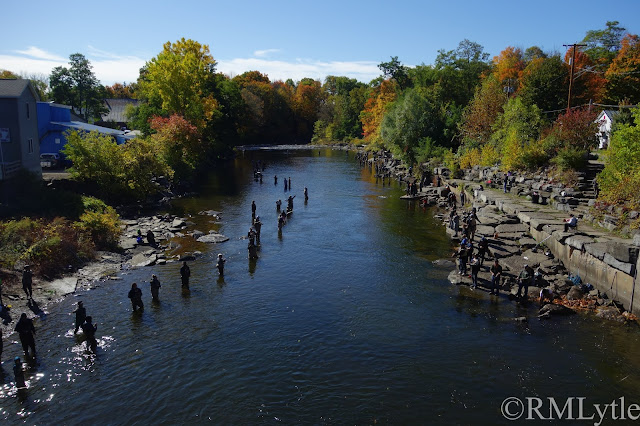 When Rick and I went to fish winter steelhead, we'd stayed well upriver, in and around Altmar. This time the idea was to fish further down where the fish were freshest. Not far above the Douglaston, Town Pool is one of the first holding spots above the private water. We just wanted to watch there, as this spot is rarely anything less than pure chaos. It was a fun show to watch, though I'm certainly not the type to want to take part in this sort of fishing. Fish were snagged, lines were crossed, and it was the furthest thing from socially distant. But the behemoth fish we could see in the waters below shed light on why it was this way. For most of these people, chances to catch fish of this size (in a small river no less) don't come that often and the allure surpasses the rest of the experiences that would make someone like myself turn their nose up to it. 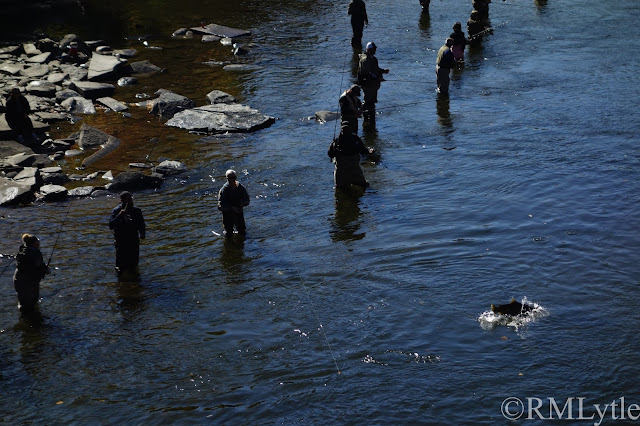 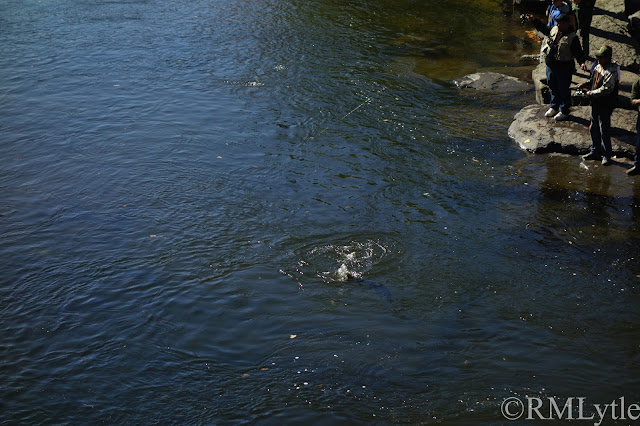 Snobbery, or some semblance of it, had already set in.
We drove around a bit before settling in to fish at Pineville. I was eager to do some wandering and walk to try to get away from crowds. It turned out that this was possible, but it wasn't easy to find water that had both fish and less people. I know I never found any water that had both some fish and no people. But I did find some and less, and that seems to be about the best you can do. 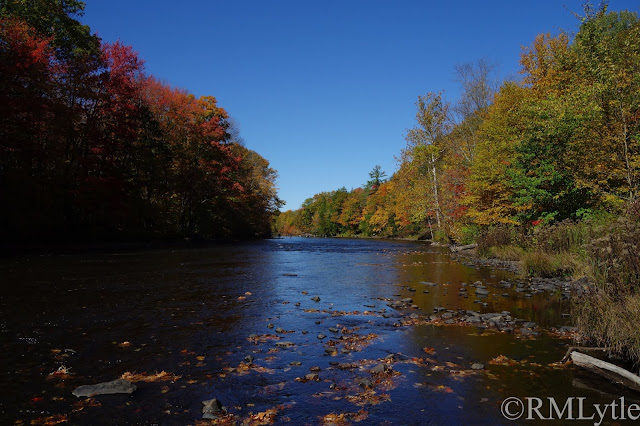 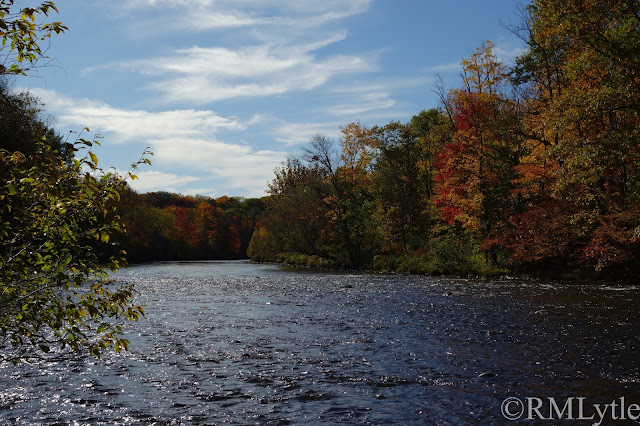 My expectation were low that first day, but I tried a bit of everything some swinging big flies with my spey setup to nymphing and dredging eggs to sight fishing with small streamers. I hooked one fish while sight fishing, and it wasn't the one I was targeting but the more beat up individual it was next to. It made an unexpected move and I suddenly found myself attached to it by the dorsal fin. Try as I might, I couldn't roll cast the fly off of it, but the fish was fresh enough to put up a solid fight so I decided to use this as an opportunity to decipher the limitations of my tackle against these fish. I put as much pressure on the fish as I was willing to plucked my woolly bugger out as soon as it got close enough. From then on I decided to break fish off that were clearly snagged.
When I made it back to where Rick and Charlie were, Rick was hooked up. I stood on the bridge to watch and shoot photos. Eventually the fish came unpinned, unfortunately, and by that time we were hungry and decided to head out 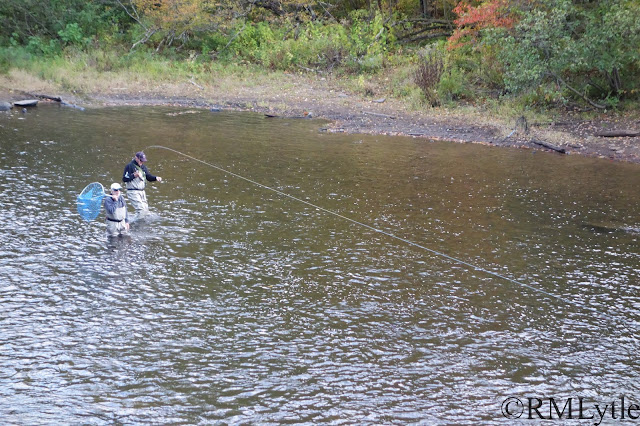 We got a pizza at Paulanjo's in Pulaski than headed to the hotel and eked out what precious little sleep we could. In the morning, we went to the Douglaston. After New York senator Doug Barclay got sick of fisherman trespassing and behaving despicably, on his large property on the lower reaches of the Salmon River, he turned his property into a private, regulated fishery. Anglers who are willing to can pay for the privilege of smaller crowds and better behavior on prime water under the watchful eye of the Douglaston's river keepers, who make sure everything is on the up n' up.
I very quickly came to the conclusion that I'd never fish the public water on the Salmon during the mid fall season again. Yet another level of snobbery had been reached.
Rick and Charlie decided to settle in at one of the major pools, but the wandering itch was bugging me and wander I did. I spent some time in the riffles trying to get some chinooks holding in the pockets to react to flies, but I inevitably found my camera better at capturing these fish than my fly rods. 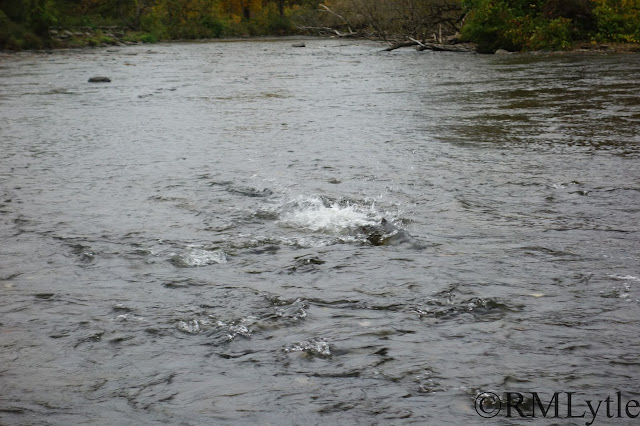 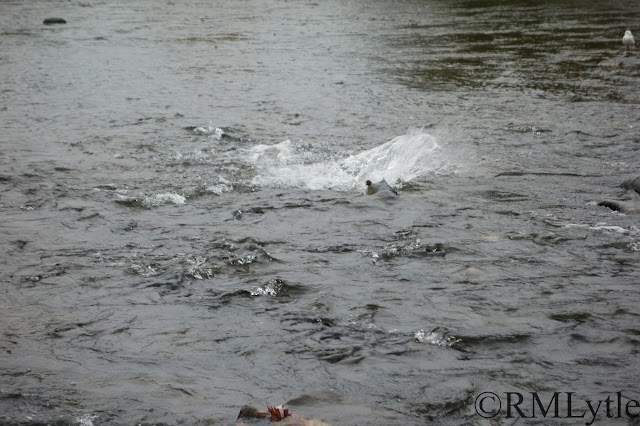 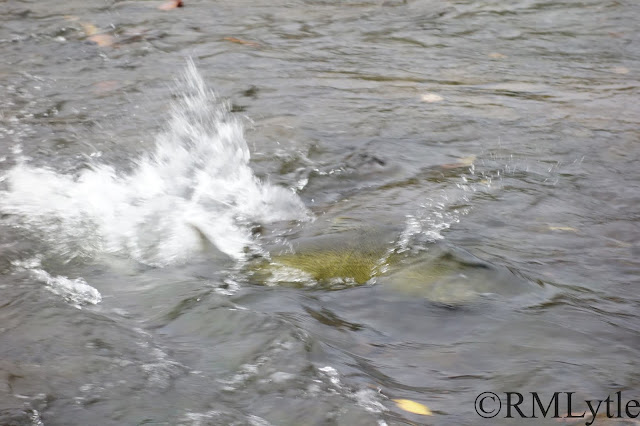 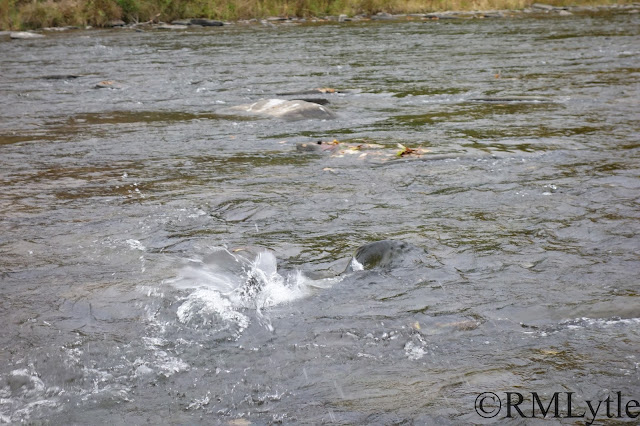 I wandered my way downriver before settling in to fish hard in a stretch that looked good but wasn't especially busy. I started out bouncing heavy flies, doing what basically everyone else was doing, and kept doing that for a while, through a couple missed fish and a couple intentional break-offs of fouled fish. As the day wore on though I began to bore of it. In time the pool cleared out nearly entirely, and I switched to the spey rod, started at the head, and began to cast and swing.
10 casts in, my intruder got smoked. I swung and whiffed, and a chrome steelhead did one cartwheel in retaliation. I swore under my breath and my arms fell to my sides. That I had not expected, not so soon. That moment right there sold me completely. I was swinging for the rest of the trip. I felt affirmed half an hour later when a big dark king smoked my weird olive and purple fly and put up an admirable fight. It was my first chinook, my first Lake Ontario salmon, and my first salmonid approaching 20 pounds. 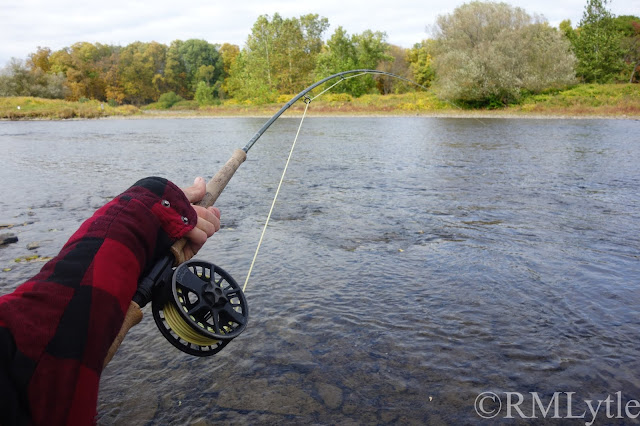 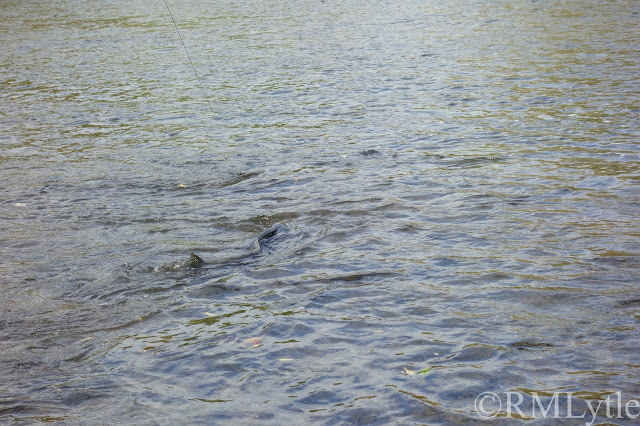 I had a couple more wonderful experiences with chinooks that day and the following. Very few of them ended with a fish to hand. The largest fish I hooked took a big yellow Gartside softackle streamer around sunset and was likely in the 40lb class. It roared off, leaving the run I hooked it in, the leaving the pool below it, then entering the next long run below that before turning, jumping, landing on my leader, and breaking off. I felt pretty under-gunned with my 11'6" 8wt. The next day a fish of similar size gave me the same sort of battle but this time I landed, unfortunately it turned out to be hooked outside the mouth, so though it was a gorgeous quite fresh beast of a fish I didn't photograph it. The first fish I'd hooked that day was also the same sort of gigantic male, but not on for very long and did definitely eat the fly, a huge pink marabou spey fly. After doing some crazy frantic runs; charging up, down, across and back but never for than 30 feet; it launched completely out of the water sideways and threw the fly. The image of a 35-40lb chinook two feet above the river, spray sparkling like shards of glass haloing it, and my fly falling out of its big toothy maw will forever be burned in my brain.
Later on the second day I got the freshest king I'd been able to land. He was a little fellow, and almost fooled me into thinking he was a big brown trout. It was a pretty cool fish nonetheless. 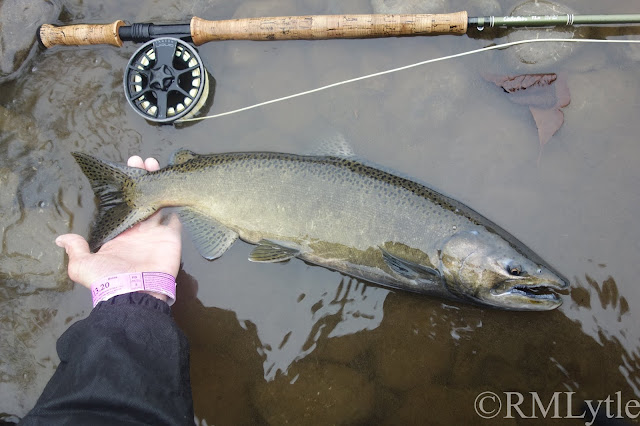 The fish that made the trip for me though came in the first evening on the Douglaston. I was working a bend very thoroughly, trying to drive one of the big kings or cohos I'd seen in there crazy to the point of snapping at my irritating white and grizzly swing fly. That didn't happen. Instead, my fly got crushed at the end of the swing, and a silver bullet came flying out of the water when I set the hook. It was a steelhead, a chrome psychopath, and it came upstream and went right by me spending more time in the air than in the water. My heart was pounding. The rest of the fight was pretty much a blur but I do know I was utterly floored by how hard this fish was fighting for its size. By some miracle, I got it to hand, and couldn't stop uttering expletives under my breath. This was my first fresh steelhead, my first steelhead on a streamer, and my first on the swing. It completed my transition to snobbery. My days of nymphs, split shot, and dredging up Great Lakes salmon and steelhead are probably over. It had never sat well with me anyway, I gravitated towards spey fishing in the same way I was drawn to fishing for Atlantic salmon and sea run trout with traditional flies and methods. It felt like it did the fish justice, as if the fish were made for the methods instead of the other way around. 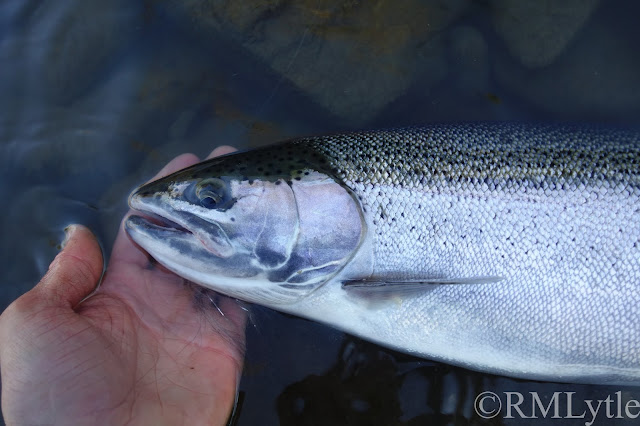 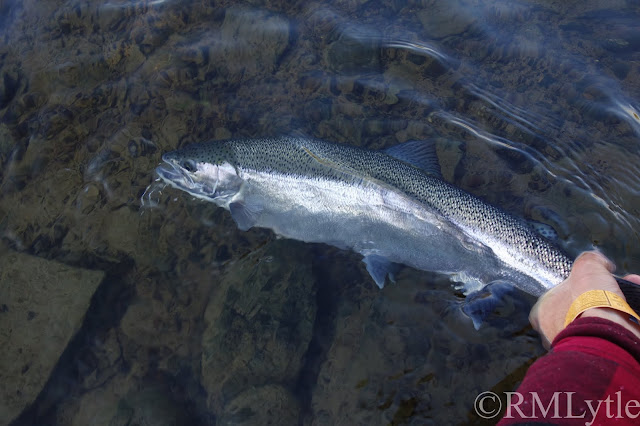 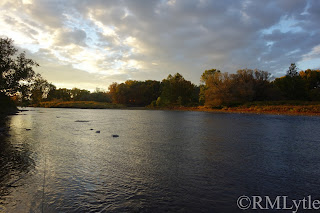 I'd never be so bold as to suggest superiority, I don't care how you catch your salmon and steelhead so long as it falls within the bounds of what is legal and fair-chase. Bait, center pinning, chuck and duck... they're all completely valid and ethical when done right. But for me, I can nymph trout, fallfish, bass, suckers, and other such species. I would like to swing my flies without additional weight for my migratory fish. It just feels right to me. That was my takeaway from this trip. I became a spey snob. I can't wait to make a steelhead trip and swing flies for hours upon hours for scant few
takes. I really can't. 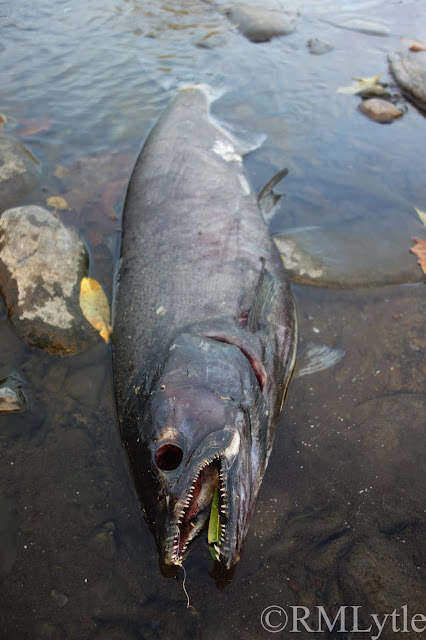 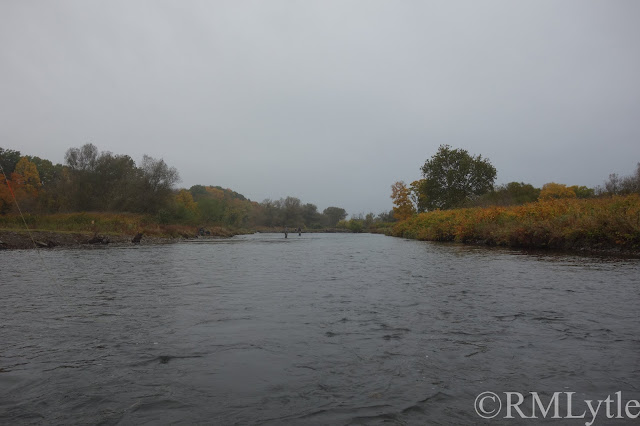 It took much too long for me to experience the Pulaski salmon run. It's such a huge part of Northeast fishing culture that one can't can't live here, be serious about fishing, and get away without making the trip at least once. There wasn't anyone I'd rather have taken the trip with than Rick. Though Charlie and I had never been, Rick has a long history with this fishery. He knows it well, he's seen it morph and change a bit over the years, and he's caught a lot of salmon and steelhead there. Charlie was also great company. I'm sure the three of us will fish the Salmon River again sometime, Covid willing.
Until next time,
Fish for the love of fish.
Fish for the love of places fish live.
Fish for you.
And stay safe and healthy.
Thank you to my Patrons; Erin, David, John, Elizabeth, Brandon, Christopher, Shawn, Mike, Sara, Leo, C, and Franky for supporting this blog on Patreon.
Posted by RM Lytle at 6:19 PM