May 12th. The sky was clear, the sun was bright, and the wind was cranking. From virtually any perspective, these conditions were less than ideal. But Noah and I aren't ones to shy away from a challenge and the fishing had been exceptional, so we dropped the boat in the lake and prepared to be brutalized by wind in the hopes that we might find some smallmouth.

We hit the first, most consistently productive spot. Nothing. No surprise there. I then suggested we try a point to the south. The wind was absolutely rushing around this rocky point, creating current and an eddy in the lee. I got grabbed in a few casts, then again, missing both. The second felt huge. Then I heard Noah say "snagglepus" and turned to see him bent double, very clearly hung up. A short time passed, then "Snagglepus" started jumping.
A frantic battle ensued, but we inevitably put a 19" (measured, no guesswork) fat smallmouth in the net. Snagglepus was a hog. 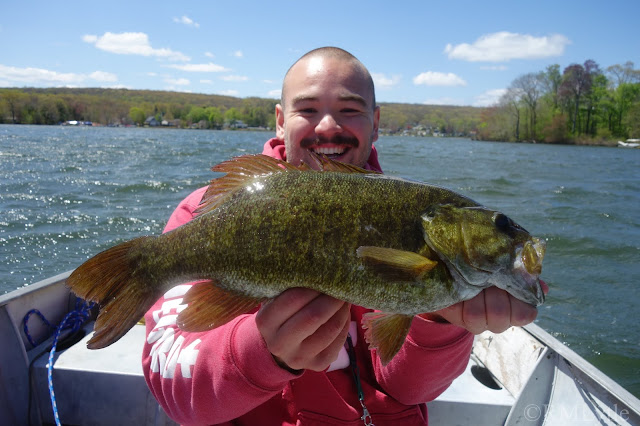 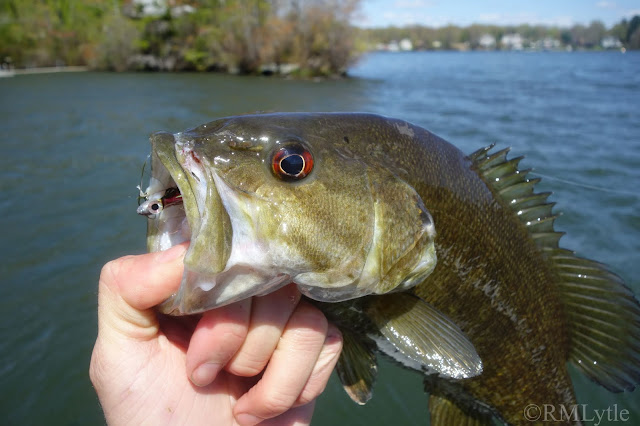 After seemingly exhausting the windward side of the point we moved to the lee. We worked our way closer and closer to the current seem running off the tip of the point, and as I'd expected that's where the fish were holding. Noah took center stage with a couple more good quality smallmouth while I piddled around with the dinky males. 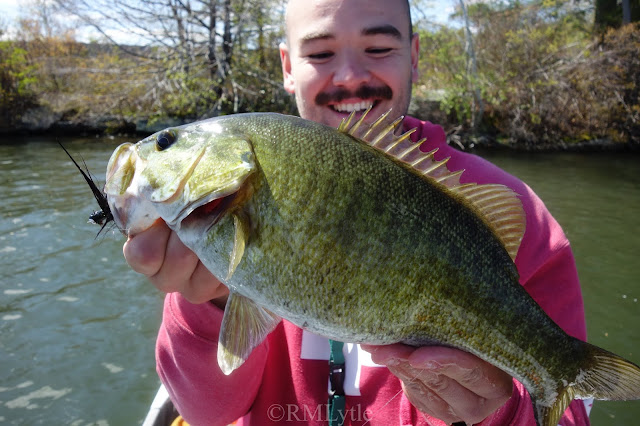 Our success was so key to this pone piece of structure, quite frankly the only point on the lake that was in play on this particular weather pattern. Lakes and ponds are often refereed to as "stillwaters" by fly fisherman, but that is a misnomer. Wind and temperature differences both cause current in lakes and ponds, and on bigger water bodies the current created by either factor are very significant. Finding where the current in a lake moves and concentrates food puts an angler in much better position to catch higher caliber fish, or simply to avoid skunking on an otherwise potentially fruitless day. Finding the sweet-spot on a wind blown point is as simple a fishing it thoroughly from on side to the other. Often, especially in the early season, there isn't just one bass, but a whole pile of them.

On another note of tactics, I primarily fished flies tied on 8th and 16th oz. jigs for smallmouth this spring. I didn't have many in my arsenal though, and on this day the color patterns I did have were significantly out fish by Noah's black bucktail jig. In this case there could have been no difference in productivity between fly rod and spin, and in certain circumstances, fishing a hair or feather jig on a fly rod with floating line, rather than a spinning rod with fine diameter braid or flouro, keeps the jig in the strike zone without hanging up as often.
Until next time,

Thank you to my Patrons; Erin, David, John, Elizabeth, Brandon, Christopher, Shawn, Mike, Sara, Leo, and Franky for supporting this blog on Patreon.
Posted by RM Lytle at 3:35 PM