Homewater Humdinger: A Few Days, a Ton of Trout.

This week has been one of those where I've had so many trips with so many being to different places that I've got a backlog of really good stuff that is all just awesome, but too disjointed to make a single post per outing. Fortunately today's fishing was relatively mediocre where I chose/had to be, and that leaves me with a void I can fill. And it just so happens that I have a ton of stuff from a bunch of trips, both short and long, that I have taken to my home river since the season opened.

The first couple of outings were really short, and I basically just concentrated on putting a hurting on stockers. I really would prefer this stream not get stocked as much as it does, so I do sometimes kill these fish. But early in the season when they aren't fully adjusted to stream life I just release them downstream from the deep holes where they were stocked. They have a hard time not getting eaten by the myriad of predators that just love these easy meals, which takes them out of the system while also feeding fish eating predators... or at least that's the idea. And it is lent credence by the fact that heron and mink activity is always much greater downstream from the stocking locations after I do my redistributing!  If more people fished here on opening day and took everything, I wouldn't bother doing this.

This year the size of the stocked trout I caught was quite exceptional, and I'm not going to lie I did have some fun beating up on these chubby critters with mice and streamers. I actually caught my biggest rainbow too, a fat ugly broodstock male with a gnarly kype. 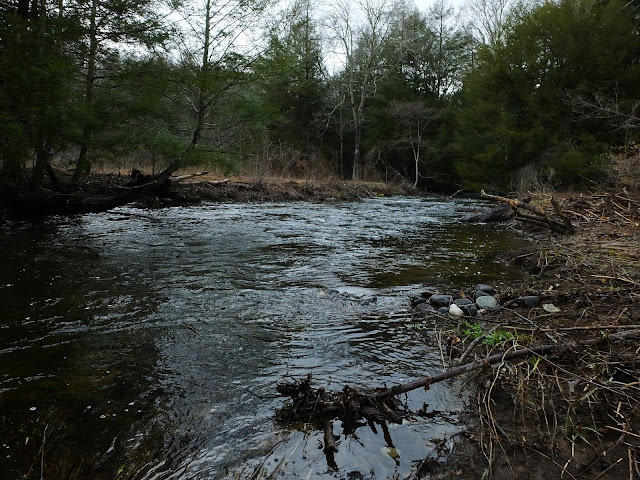 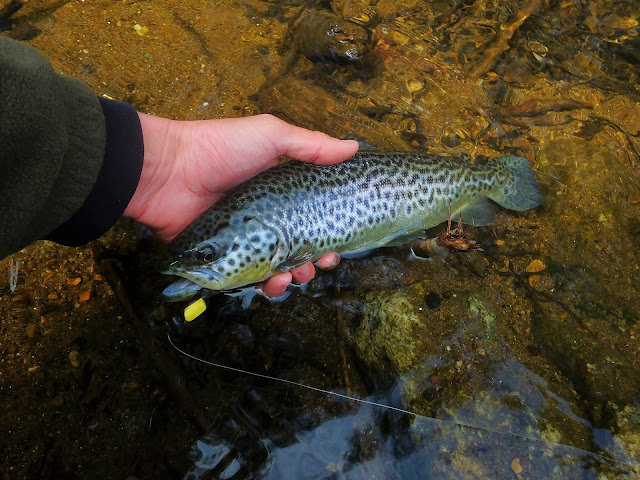 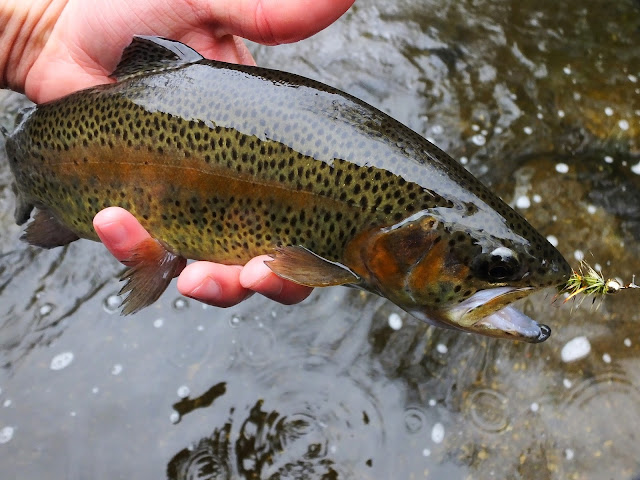 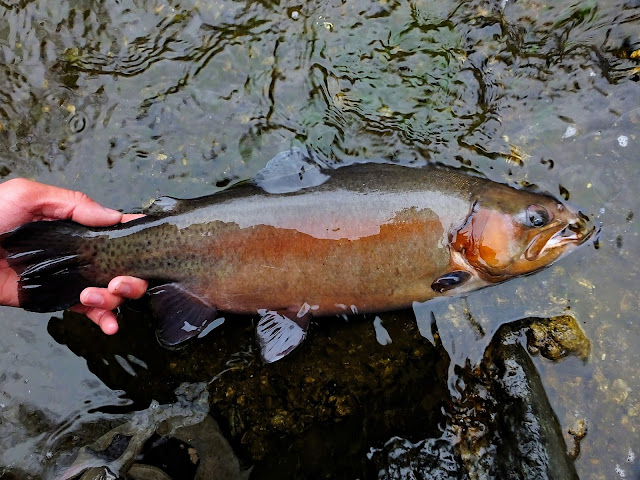 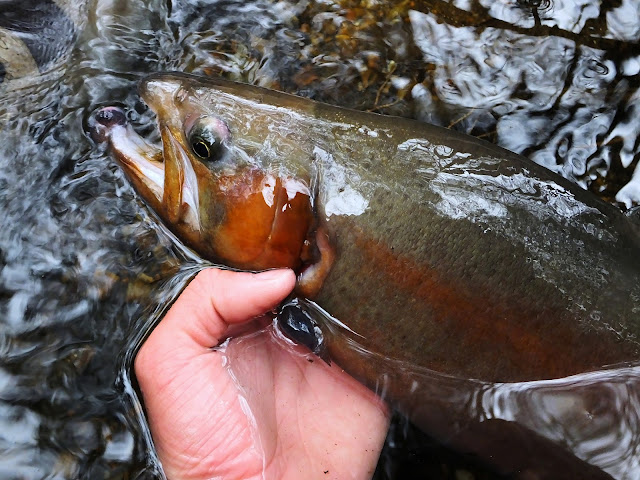 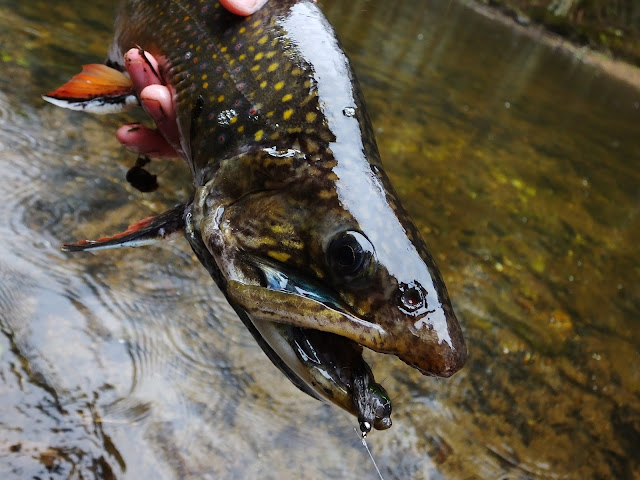 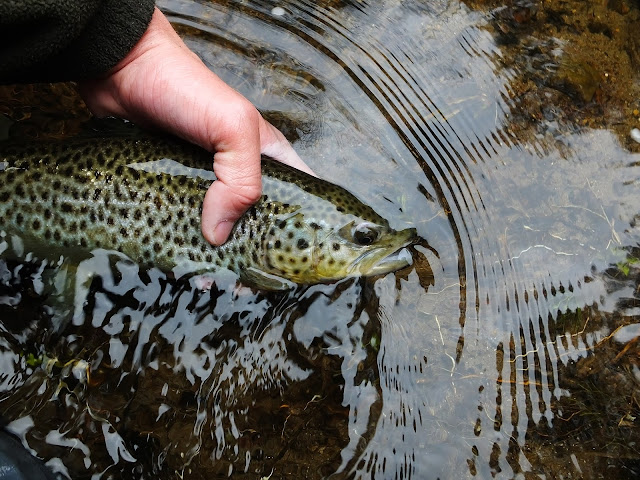 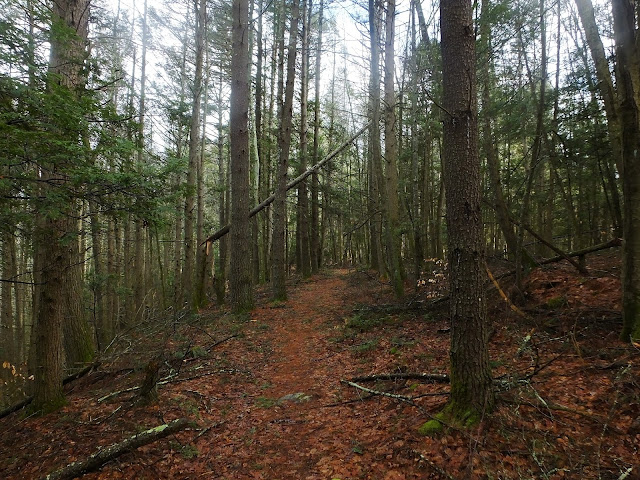 To make things interesting, on each day I went down to harass the stockers, I caught one wild fish out of the school. Most pleasantly, the first wild brookie from my home river since last summer! What these wild fish were doing in the meat market I have no idea. I just hope they have the good sense to avoid powerbait and worms on eagle claw hooks. 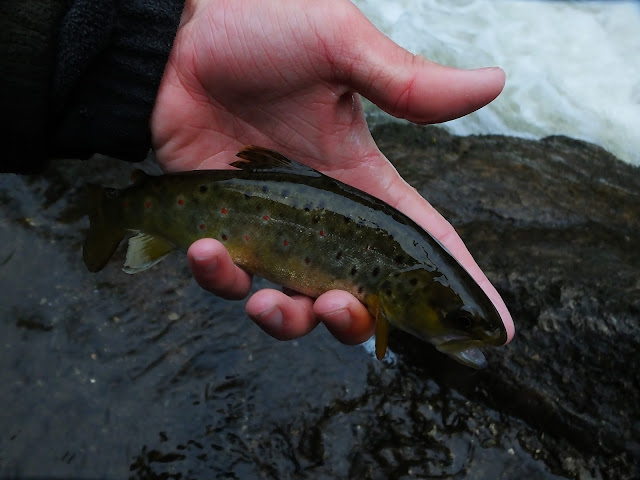 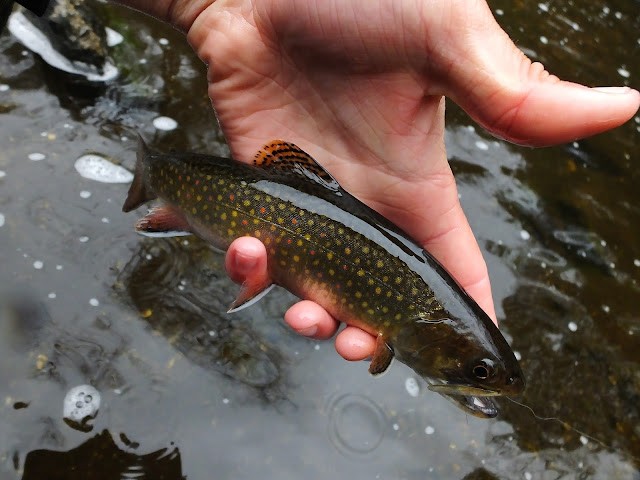 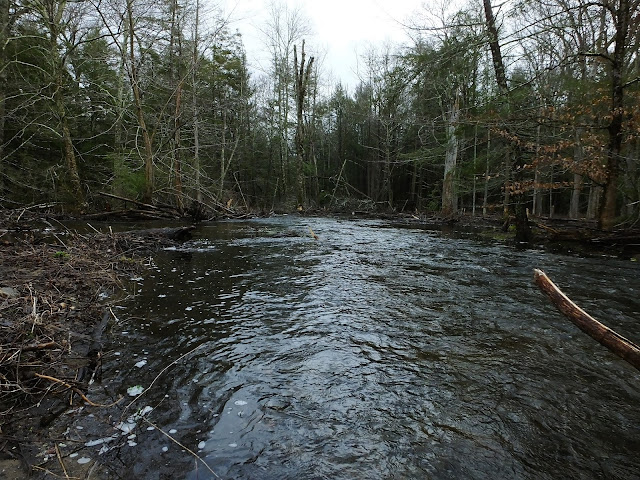 Very much to my surprise all of my outing produced a fair number of bright salmon smolts, as well as juvenile salmon of similar size that were still in parr markings. These fish are always pleasant to encounter, giving spectacularly acrobatic fights, basically a small scale version of what they would do if they ever were to return as adults. I wish them all a safe journey and tell them I will see them again in four years when I let them swim away. I know they won't be coming back, but I can't help it. 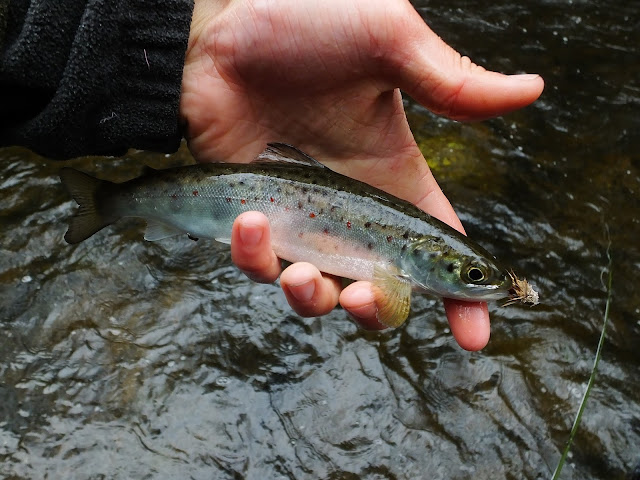 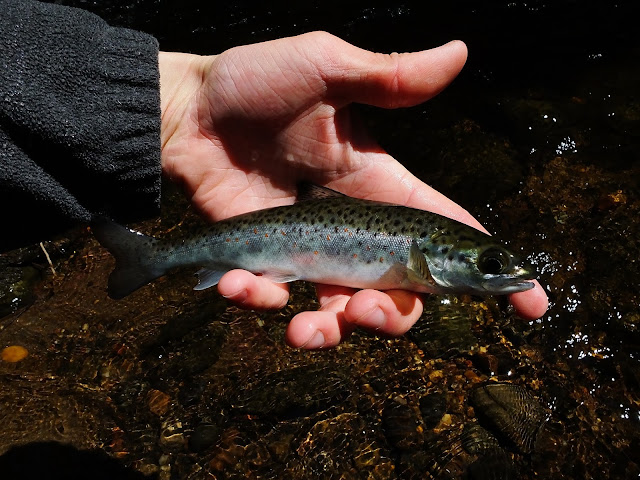 Friday was wild day. I fished two and a half miles of my home river, prospecting every bit of that water that was worth fishing with nymphs and small dead drifting streamers. It was an exciting day because all four major insect types that trout feed on (midges, caddis, stoneflies, mayflies), and I saw the first Paraleps hatch of the year! The water is still too high and a little cold for the fish to take notice of the few duns, but the nymph bite was OK. With the water as high as it is it can be difficult to nymph as effectively as I would were it about 35cfs lower, so I had to cover more water for fewer fish. That doesn't mean I didn't catch a ton of trout, but I didn't catch as many in that long distance as I know I could have were the bite really on. 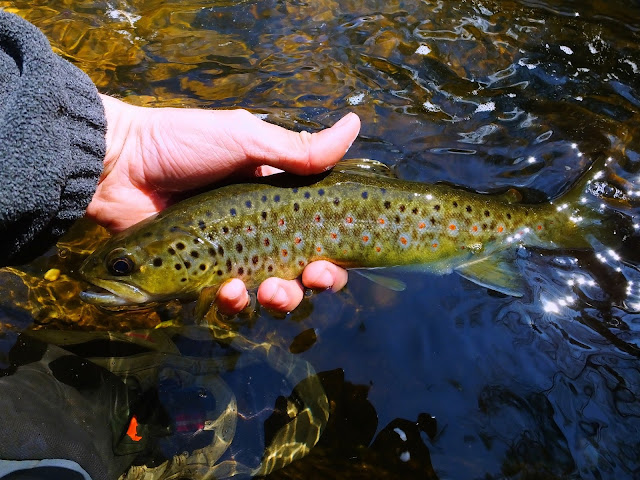 The first fish spoiled me. From that beautiful, good sized brown it went to a mix of small browns, salmon in various stages of immaturity, and the odd rainbow. For two miles. I did miss some that stung a little and definitely wasted good water fishing it "the wrong way". 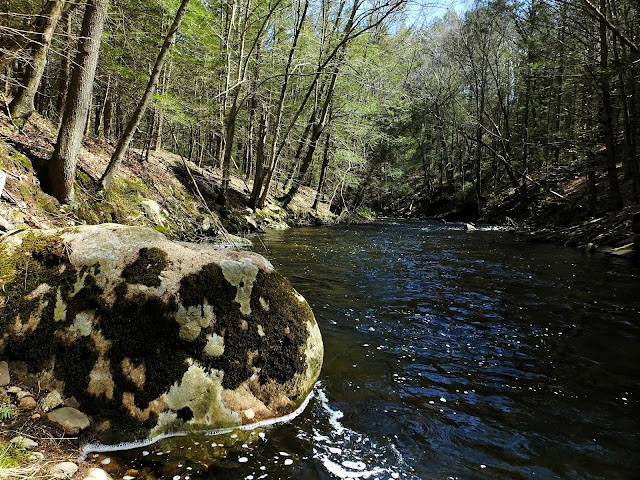 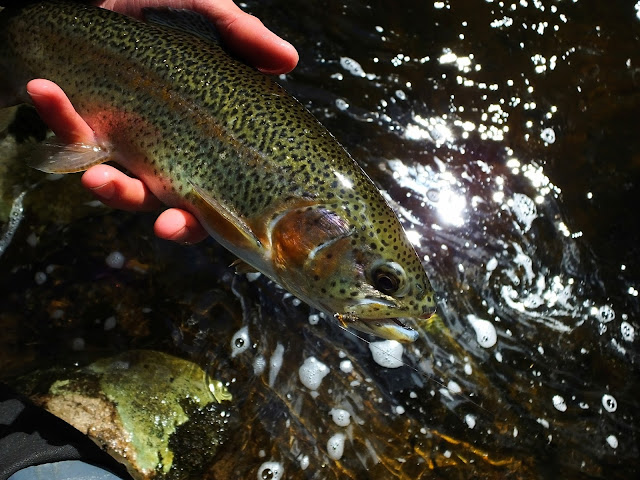 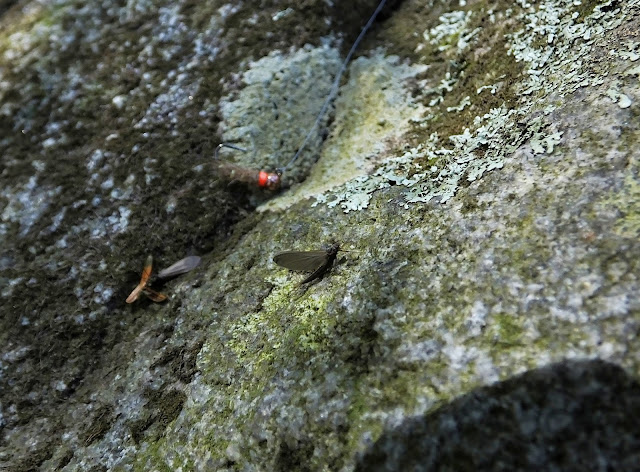 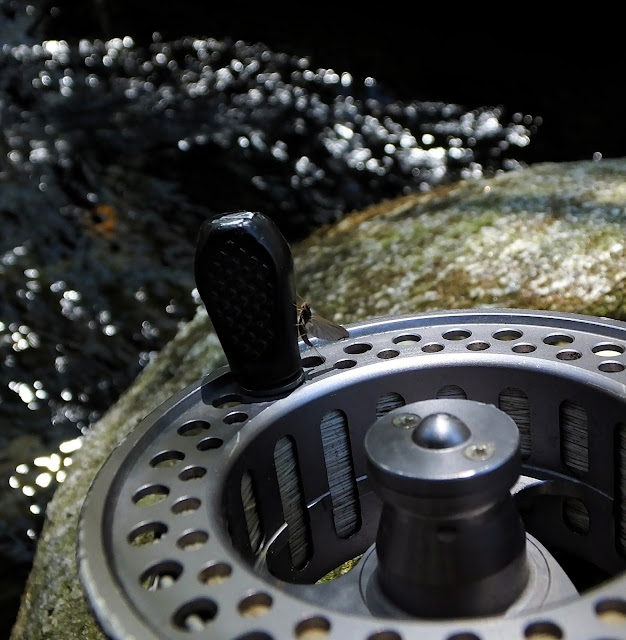 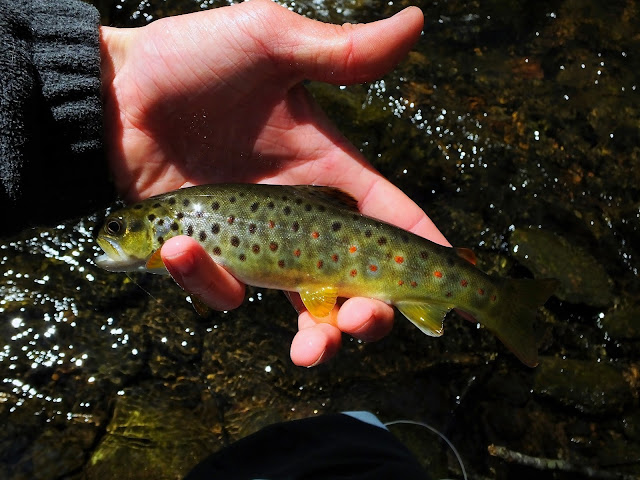 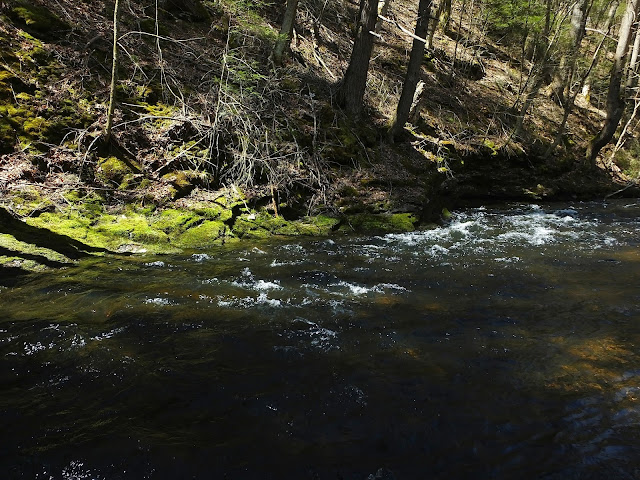 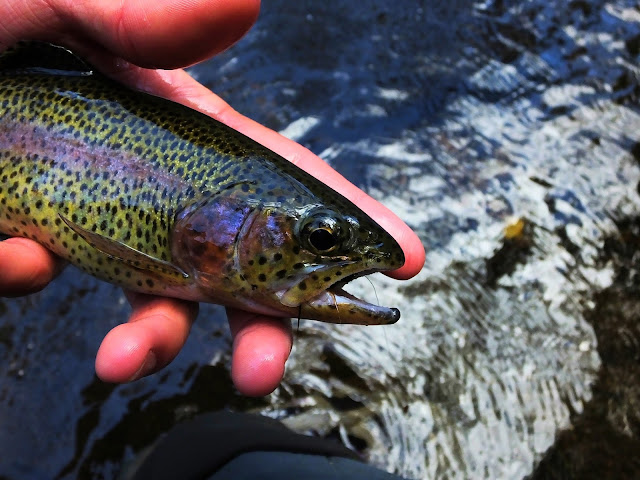 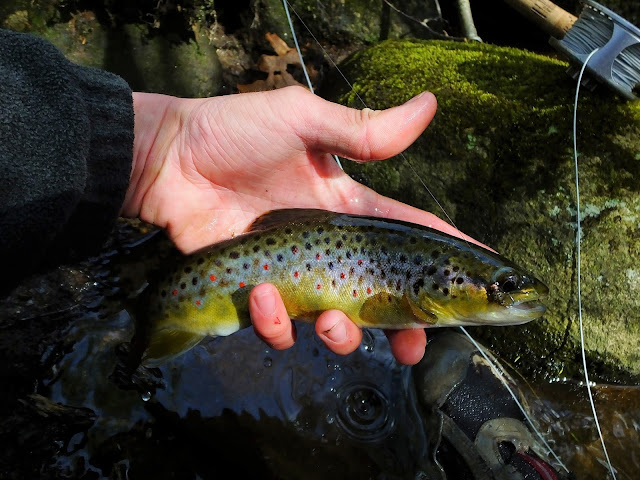 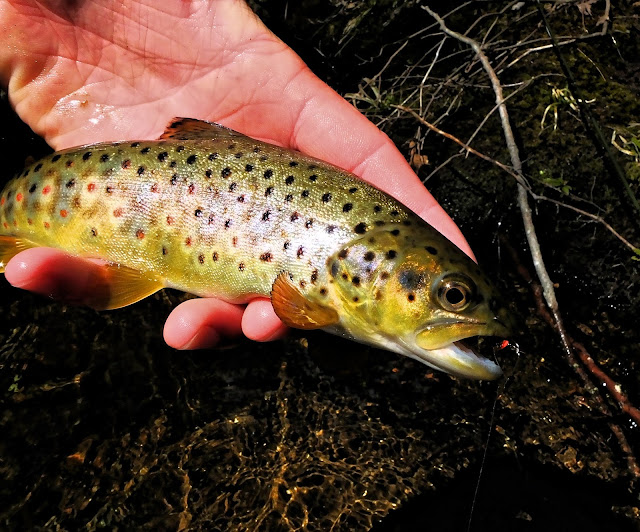 Then, suddenly, I found what I was looking for. Fishing the slick behind a large uplifted slab of bedrock, I caught a small salmon par in the mid section of the seem next to a branch, which I thought was the best looking lie in the area. Not fully deterred I dropped my Walt's Worm in the roiling water at the top and in two seconds felt a jarring hit. I lifted, and the culprit, a wild brown of over a foot long, suddenly decided that this whole staying underwater business just wasn't for it.

This stream is about as close to a mountain stream as you can get in a state without hills over 2,500  feet, and it's water doesn't sit around waiting for much. It goes down and it goes down fast and cold. It isn't at all uncommon to catch sizable browns in very heavy riffle here even when the water temperature is below 40. The result is fish that fight like hell. And this one was one of those fights that will be ingrained in my mind forever. It wasn't the most colorful brown I caught, and if I play things right it won't be my biggest home water wild trout this season, but damn did it ever fly! Over and over and over. High vertical leaps, splashy somersaults, tail walks that took it 10 feet across the run. It didn't even tire quickly, the whole battle was tooth and nail. This one was one of those trout I had to land, and the fact that it was doing what it was doing both scared the crap out of me and inspired awe. I really would have loved to have had a camera rolling at 960fps on this one, from hookset to hand. Not a dull moment. 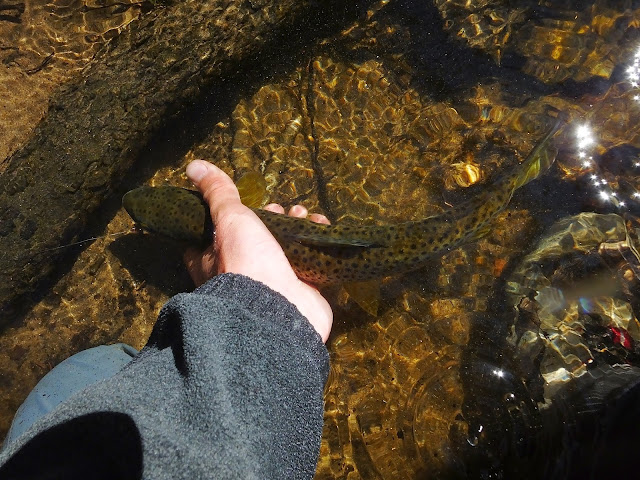 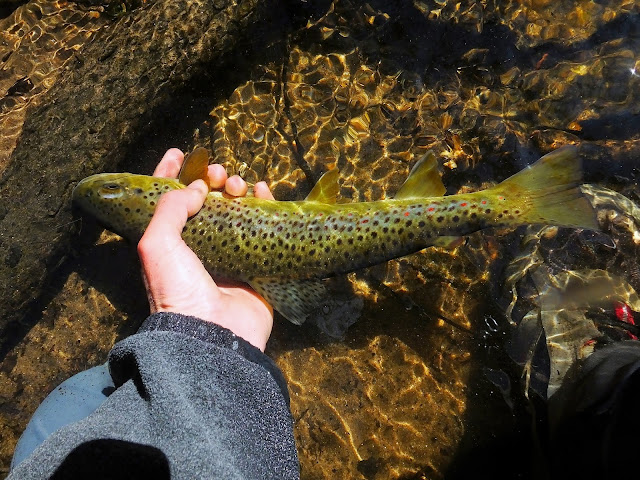 That wasn't the last fish I caught, I still had a good amount of water in my planned hike/fish, but none really compared. All gems, but often I'm looking for the bigger ones.

With the water dropping and warming I'll be back sooner rather than later to catch my favorite hatch, the Paraleptophlebia adobtiva. Hopefully I hit it right. I failed to last year.