Today I fished a very small stream, using wet flies as yesterday. It was a little freestone that I had never fished before. Unfortunately, I didn't get so much as a tap. I only saw fingerling size trout, maybe there are some scattered 4-6 inchers, but my fly didn't find them. I enjoyed the tiny river though, as it was very peaceful and rich with color. 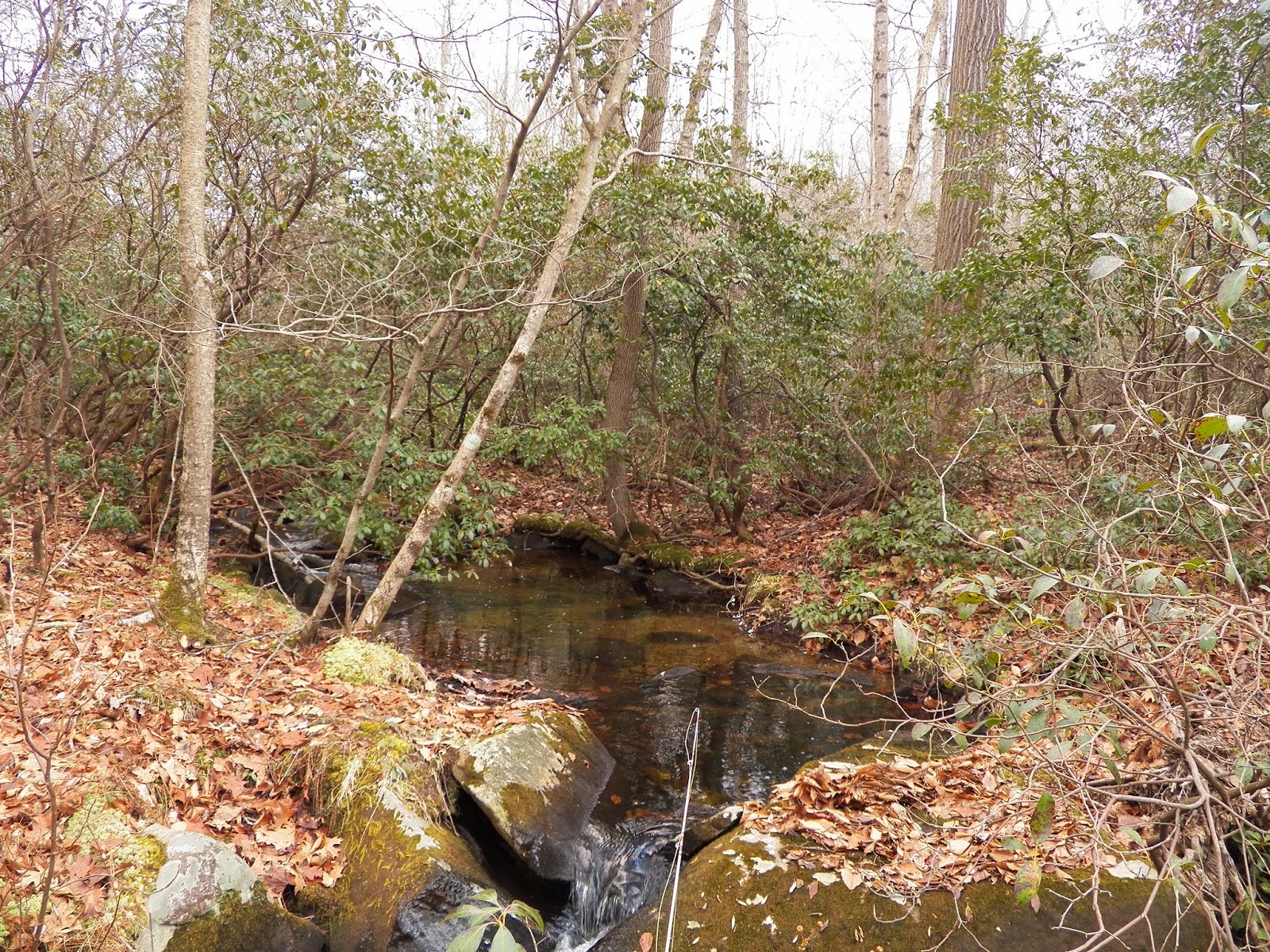 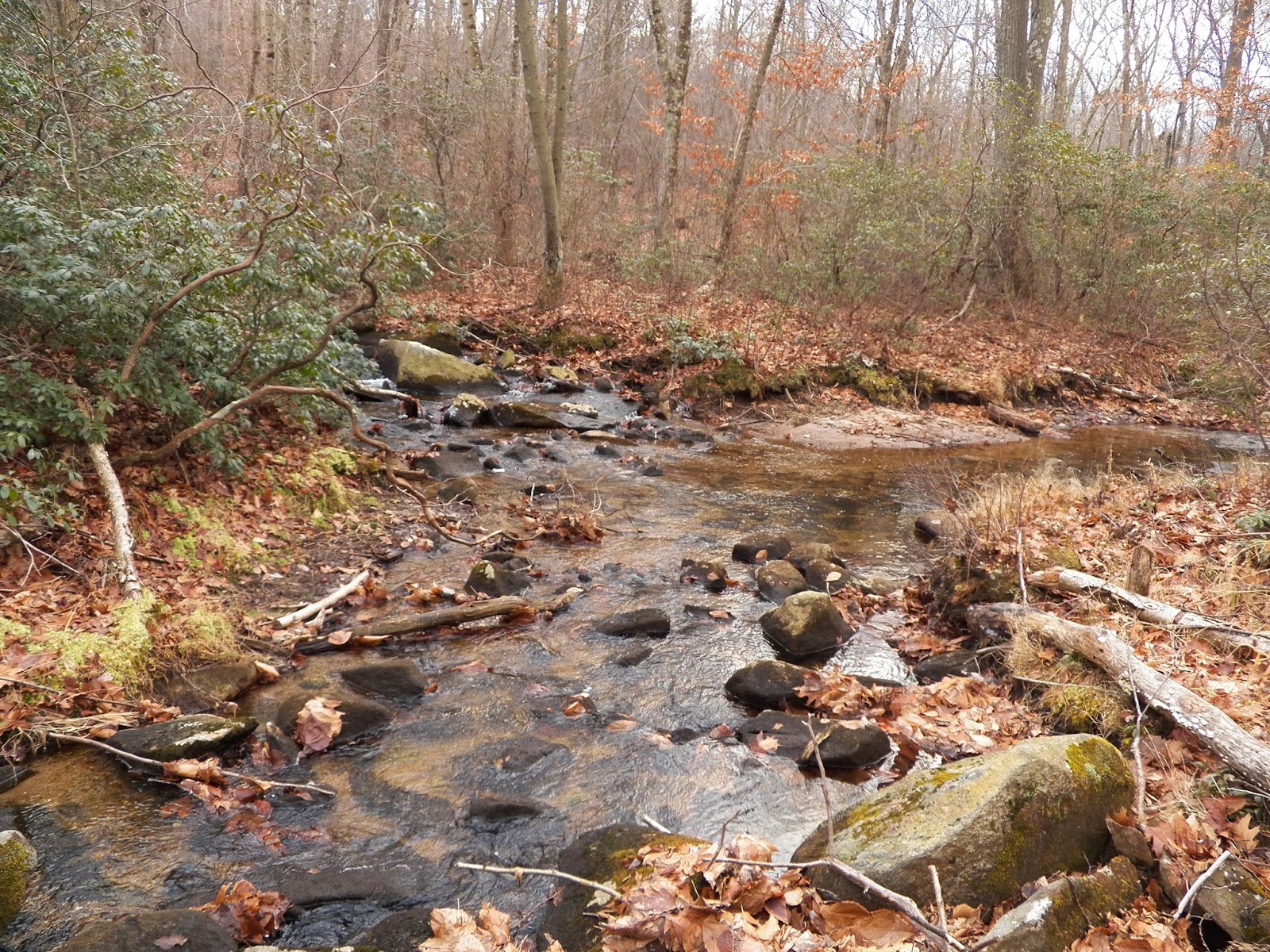 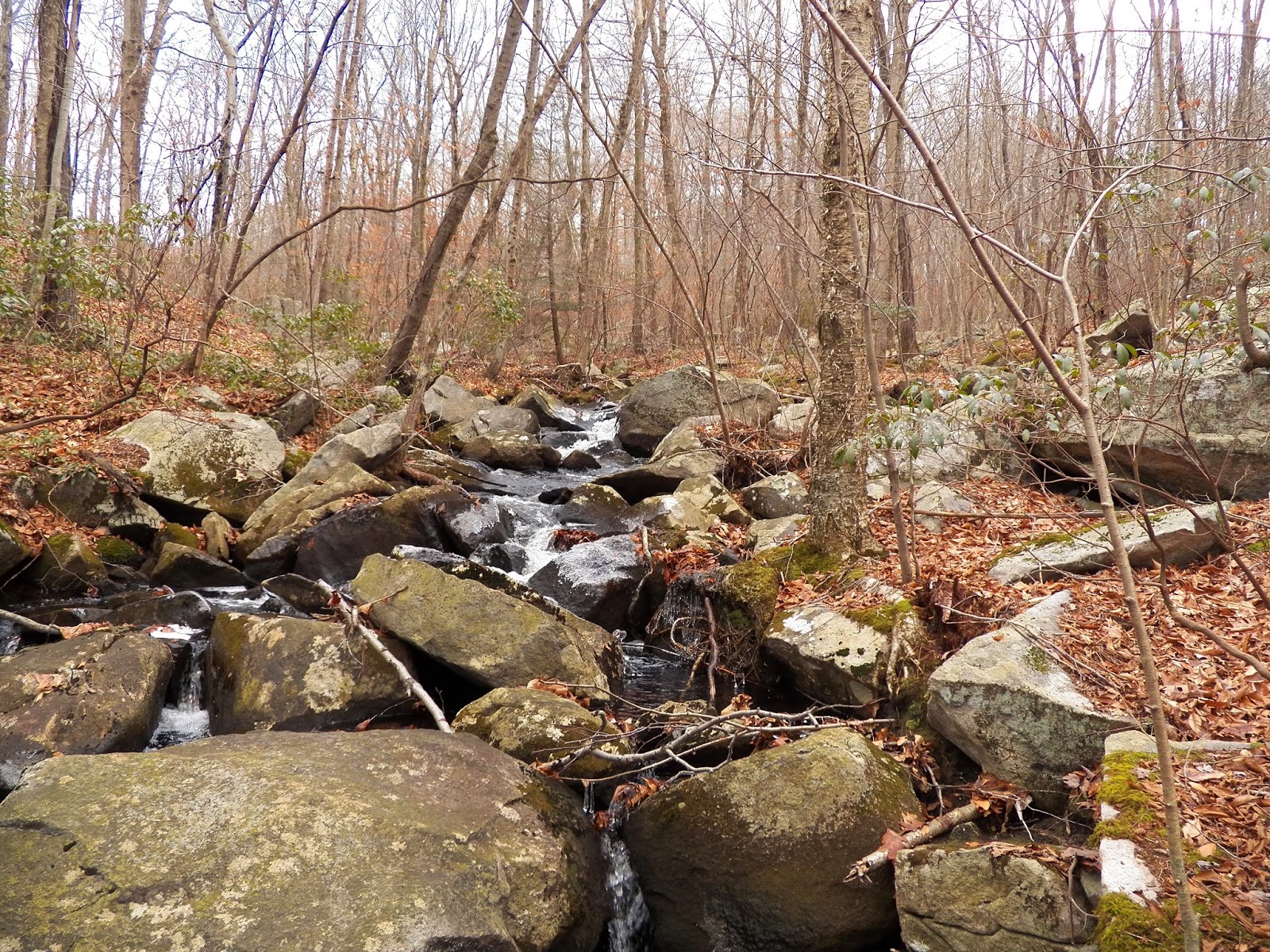 In June of this year I spent a couple days cabin camping in the Woodstock area, on a big crystal clear lake. I only had a chance to toss a fly at night, so I went out with a muddler minnow. The moon was full, and barred owls called from the lush pine groves on the other side of the lake. The only light was from the moon and in the homes around the lake. I let the fly sink, and was greeted with a screaming take. It turned out to be a big bluegill, and many more came to hand with the same technique. Midnight panfish were quite fun, and I even landed a little bullhead, but he didn't permit a photo-op as he flopped into the lake. 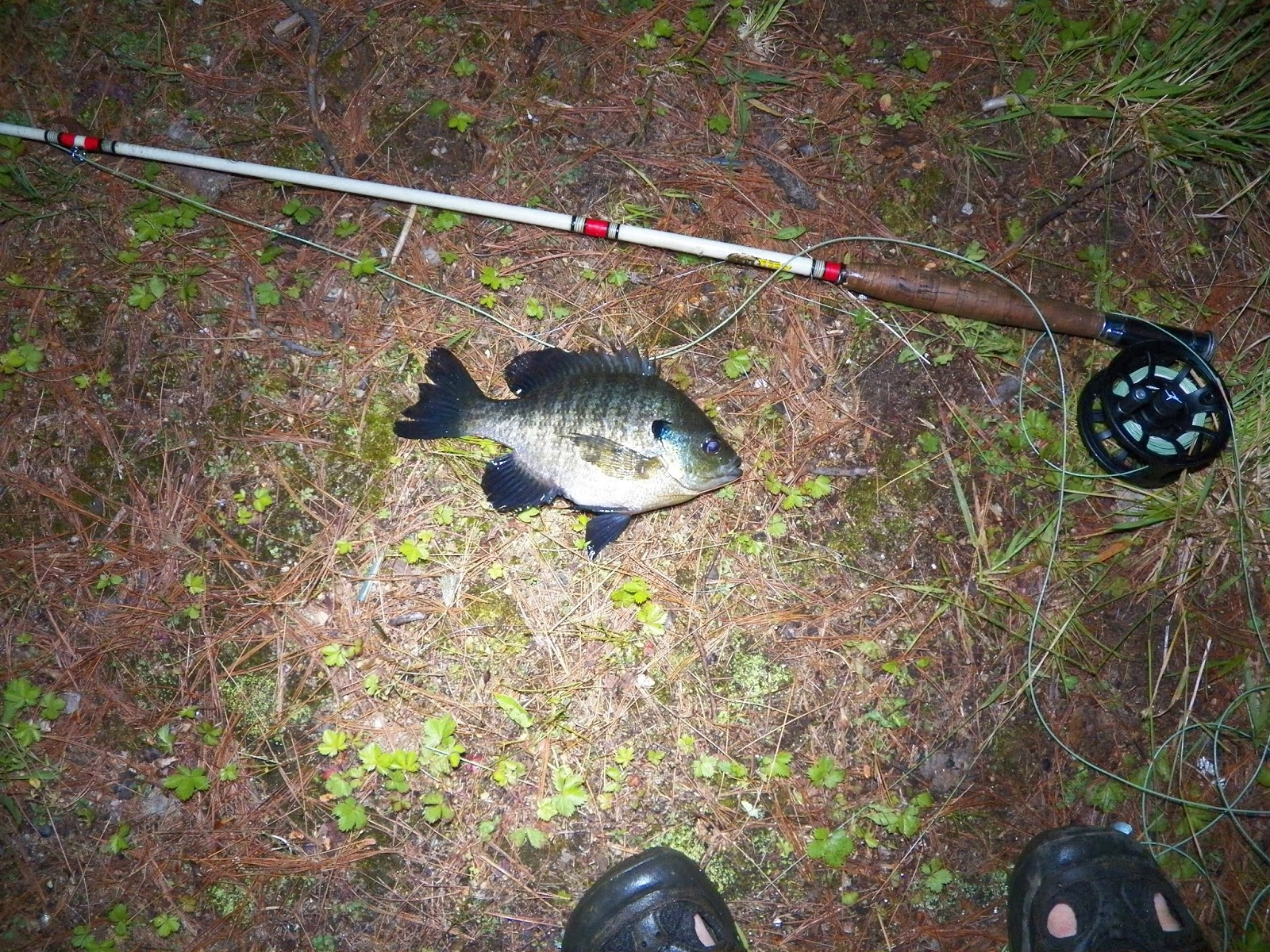 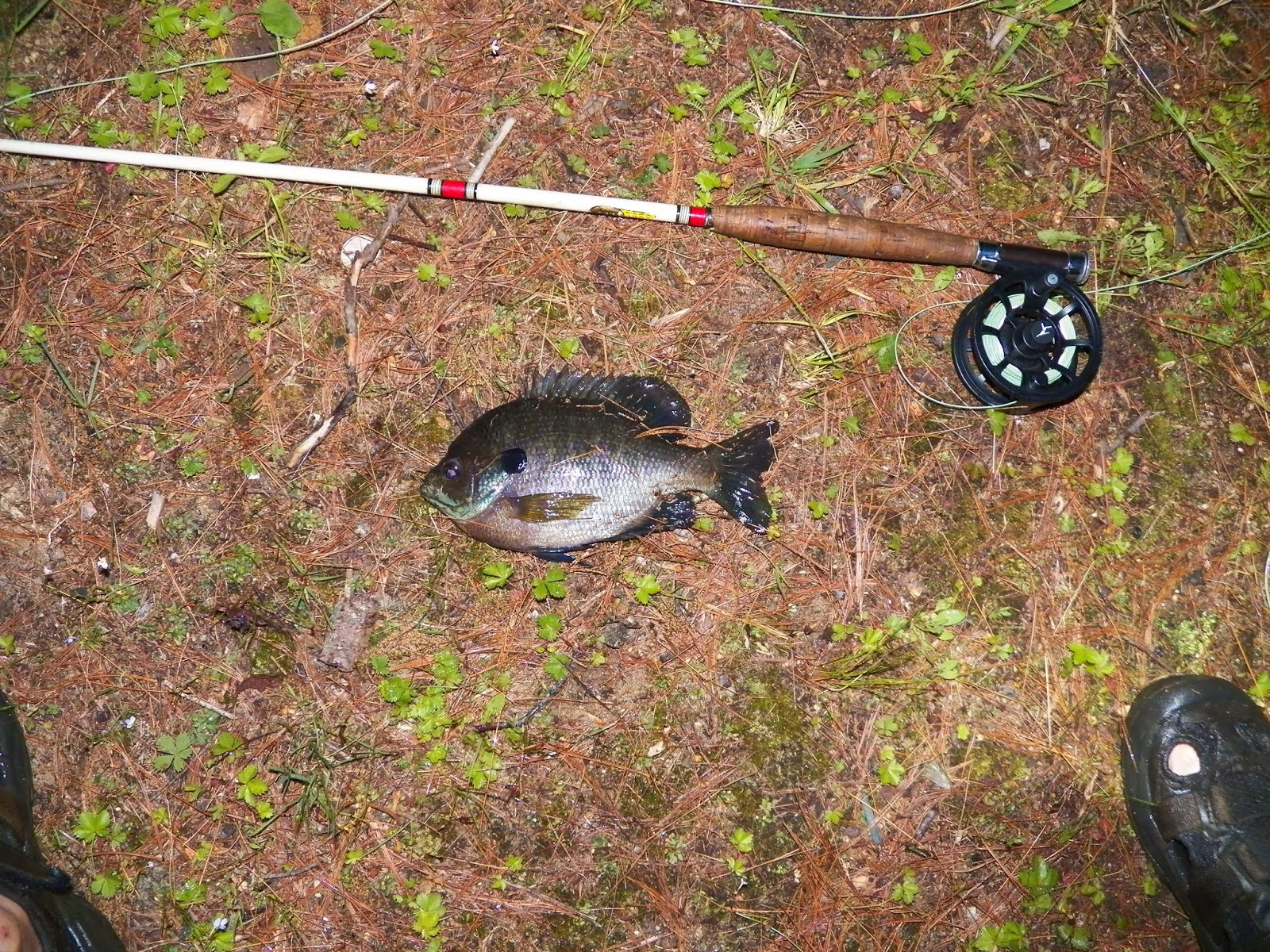 As today was Thanksgiving, I was at some of my extended family's home for an early meal. I can't say enough about the turkey and gravy that was eaten. It was just perfect. After eating I felt the need to go for a hike in the woods. I wanted to look at a little river nearby that was said to have some trout. When I reached it, I discovered heaven. It was a perfect mountain freestone with big boulders and deep ravines. 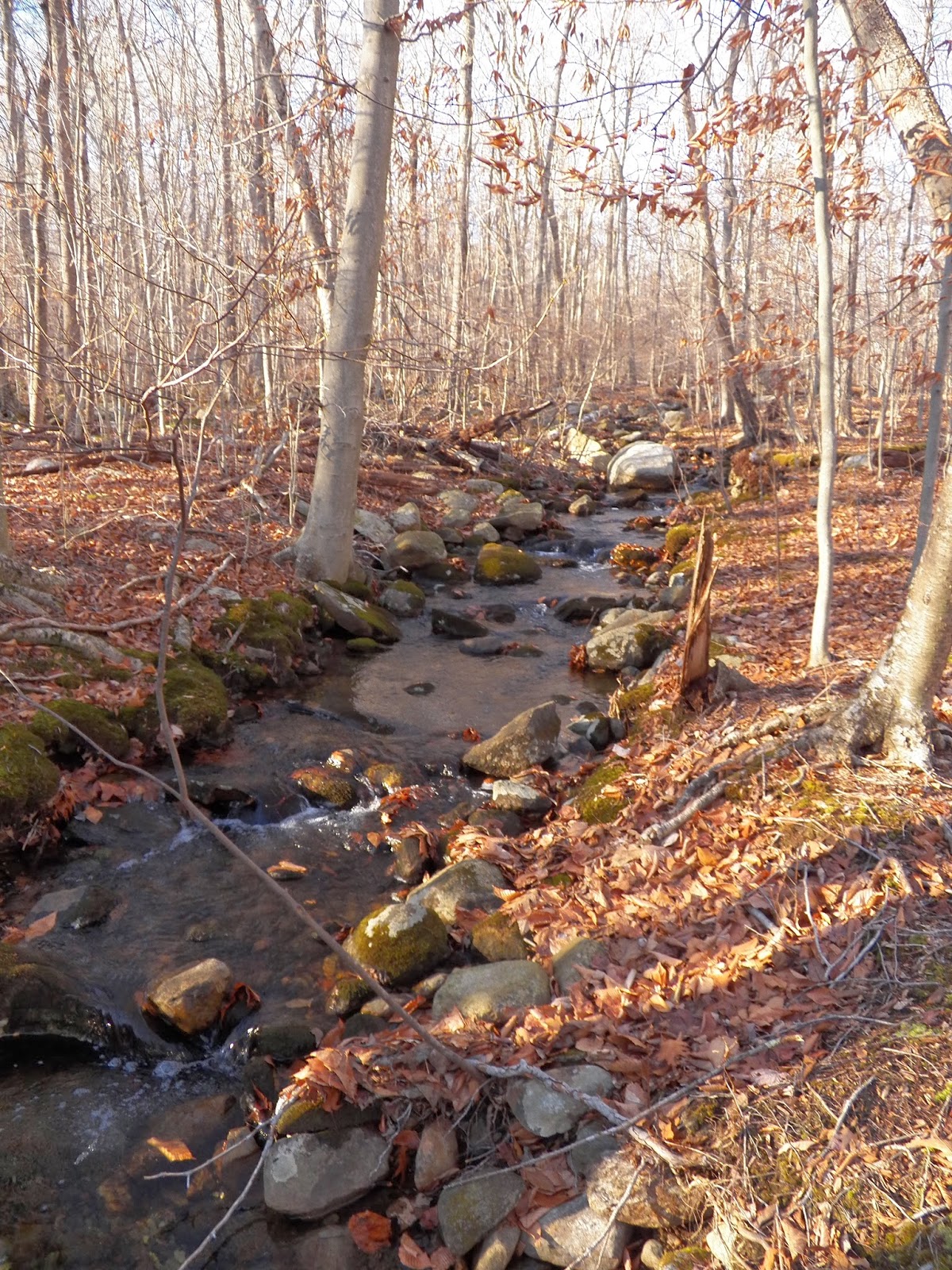 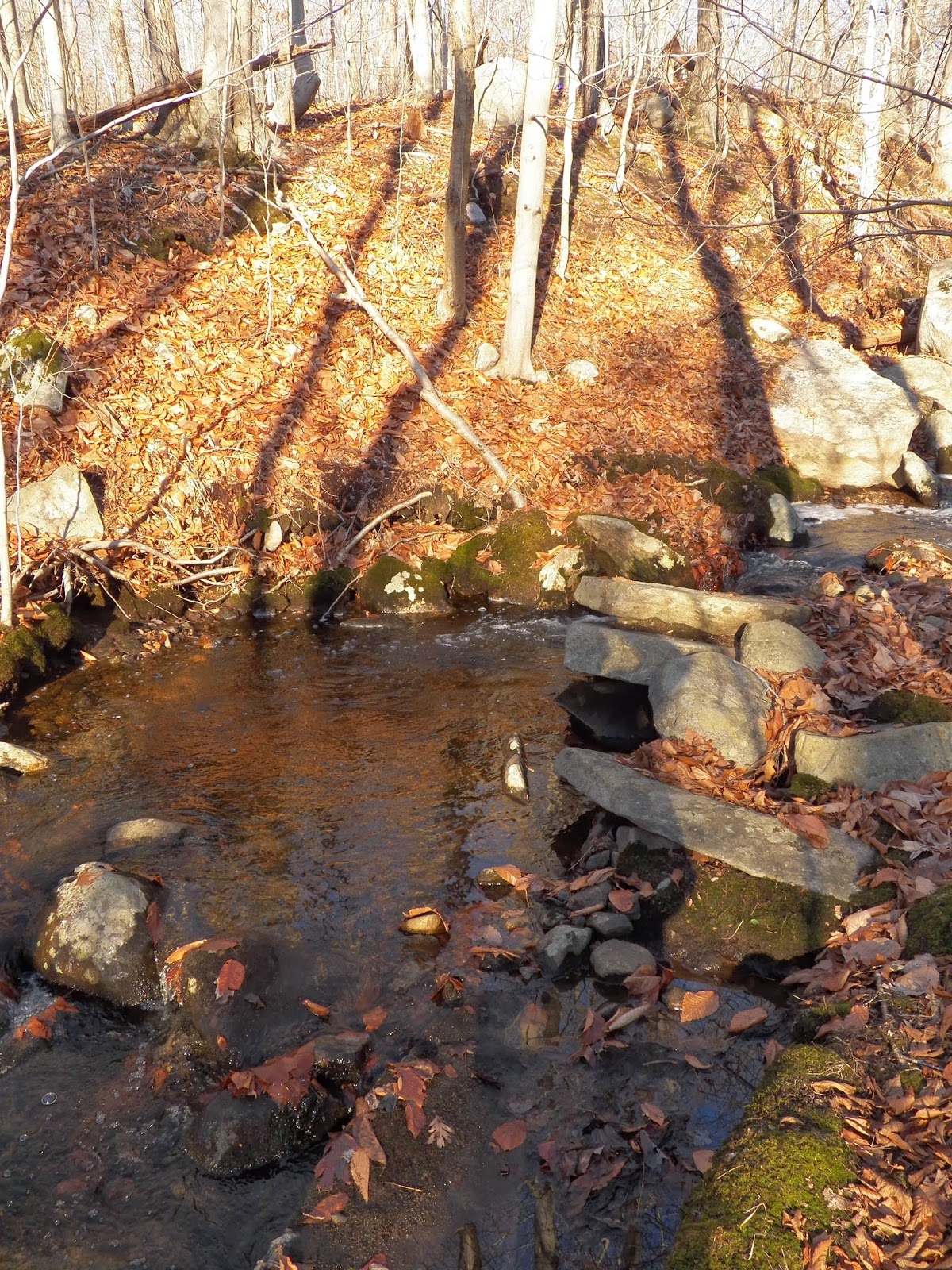 As I ventured further, and saw some fish rising in a calm pool. I snuck up on them and realized that they were sizable brookies. In times like this, there is one option: go home to get the fly rod and flies! That is just what I did. Upon returning I tied on a yellow humpy but had no luck, so I switched to a Kate McLaren Cinamon. In one pool, I hooked 8 brookies, all healthy. They took the big fly as it skated on the surface with violent slashes. Only two were willing to come to this anglers frozen hands, as the others came of within inches.

All said, regardless of the lost fish, ice clogged guides, and painfully frozen fingers, this little blue line gave me a lot to be thankful for.
Posted by RM Lytle at 2:57 PM 2 comments:

I biked to the salmon yesterday to see how the rain had effected what had amounted to a trickle last week. It was high and brown, with small trees boating the rapids. 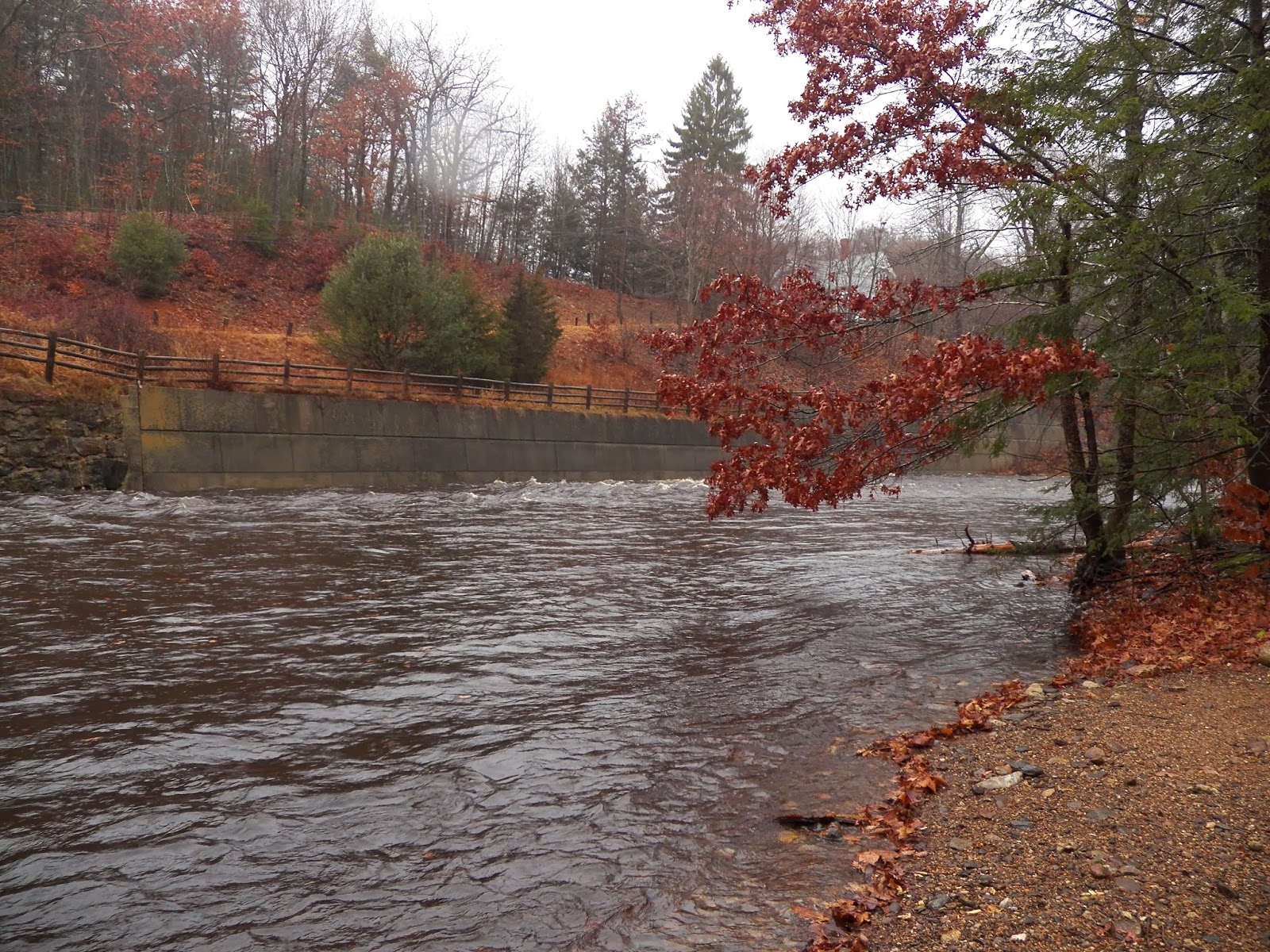 Last week I noticed that a good panfish pond I fish still had risers, regardless of the icy cold water. I headed down with a 4 weight and a Royal Wulff. I hooked my first fish, and lost it. It continued jumping, typical of a broken off fish, but I could still see my fly. After missing 6 more fish I looked at the fly, and evidently the whole bend had broken off! My luck improved with a new fly, a grasshopper.

Today I was supposed to take a trip to the Naugatuck with my father, but we decided that we should stay close to home. We headed out to some trout rivers. We had terrible luck until we made our way to a bigger river. It was cloaked with fog, and was eerily beautiful. I regret not taking a picture. My dad tied on a nymph, and I decided a streamer was the way to go. I chose a white fly made simply of a white rabbit strip tied to the hook shank with copper wire. I fished runs downstream, and in one I hooked a trout while the streamer was dead drifting through a shallow rifle. I landed a gorgeous little bow. It just goes to show that even a little feller is willing to hammer a 3 in long streamer. He didn't nip it either, I had to work a extracting the hook from deep in it's throat. Luckily he recuperated quickly and didn't bleed.

Today I had plans, but they were canceled. So I decided to go fishing. I picked up a 4 weight and hit the bridge pool I mentioned in a post last week. I tied on a weighty nymph and used the same method that had worked so well under similar conditions. I didn't catch a trout. But I did catch some fish. If you ask me, the first has no business being in this small stream. Not that his presence is destructive. It is just exceptionally unusual to find him in a cold water freestone stream with only a few deep pools. The first fish to eat the fly was, of all things, a crappie. 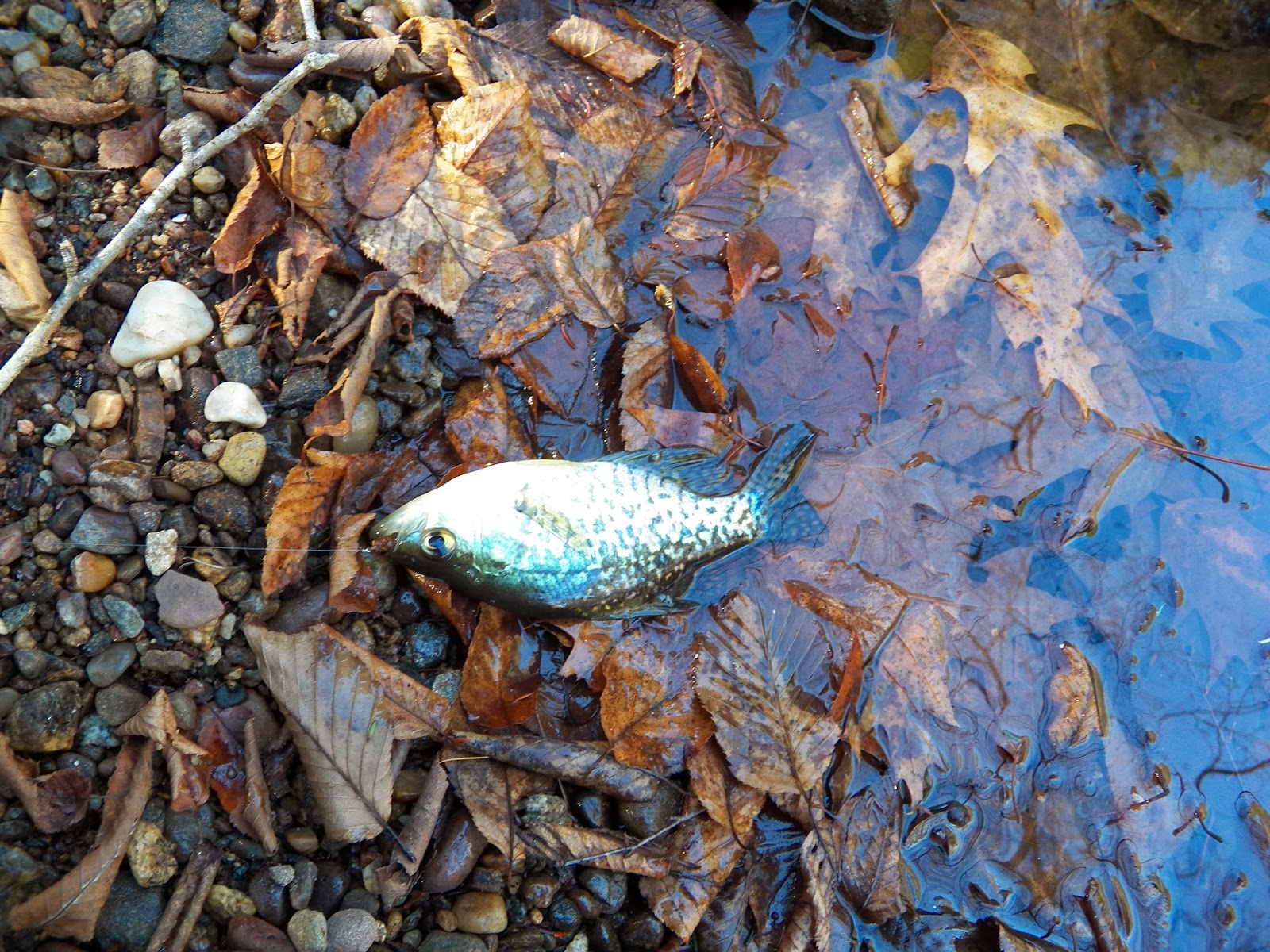 I continued fishing and caught a little bluegill. I the fished the head of the pool and caught a fallfish and spooked up a big trout that saw my nymph snag a leaf and drag it out of the water. I then headed upstream to a long stretch that I know is popular with spawning trout. I found this redd and watched the trout that occupied it until they scrambled around to the other side when I moved to grab my camera. 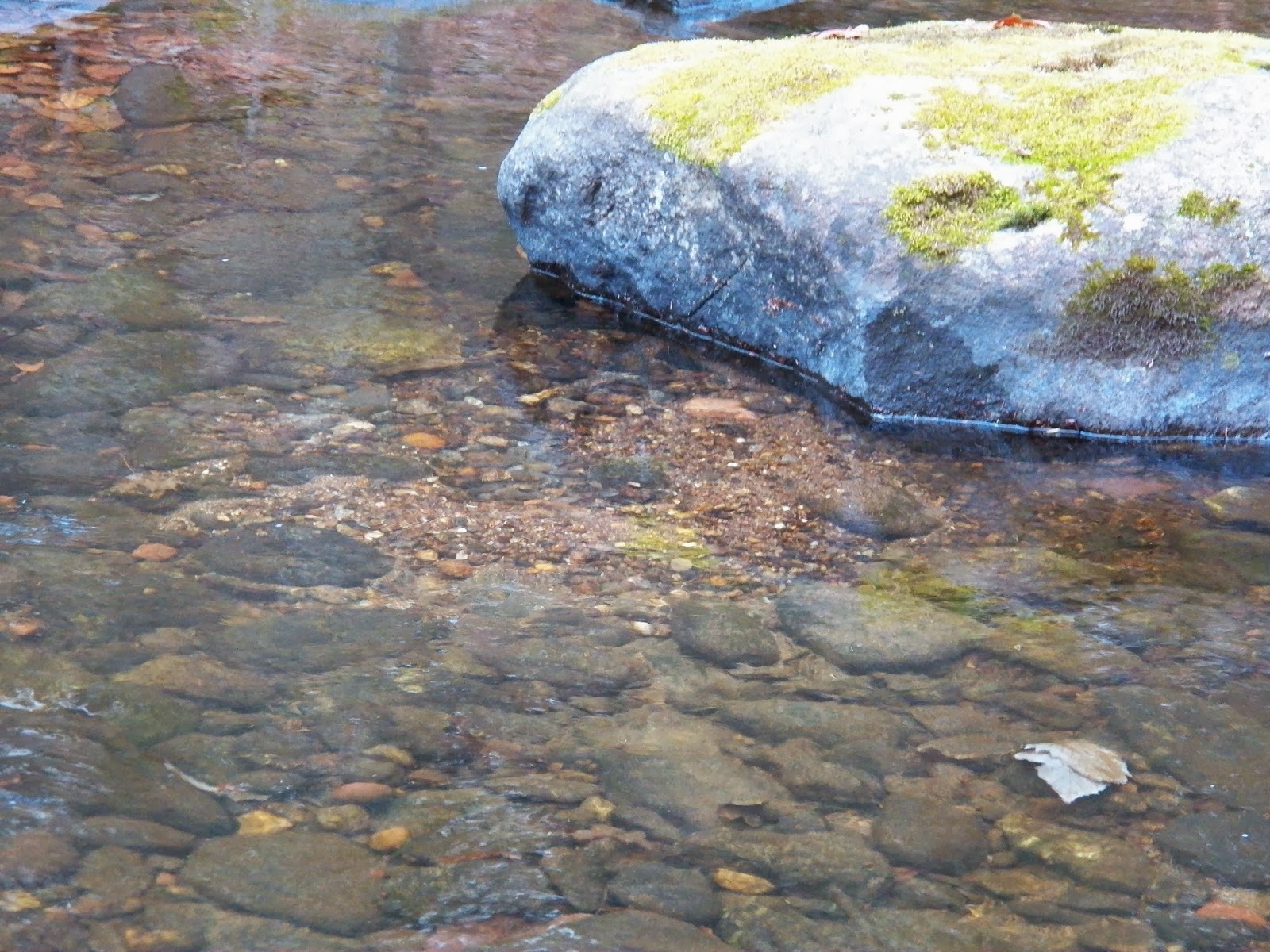 Yesterday it snowed. I don't mind the stuff, and it can be downright gorgeous, but it doesn't make reaching the remote streams that I love an easy task. The cold doesn't help either. These conditions signal time to leave still water all together and focus on rivers and tying flies. I will hopefully be out on the Naugatuck this Sunday for salmon, so stay tuned for that. I would probably not be as active a fly fisherman as I am if I didn't tie my own flies. I tie any pattern for any species, from panfish to salmon. I design my own patterns too, as is shown in some previous posts. One recent pattern I created is a golden stonefly nymph with mono bead eyes. 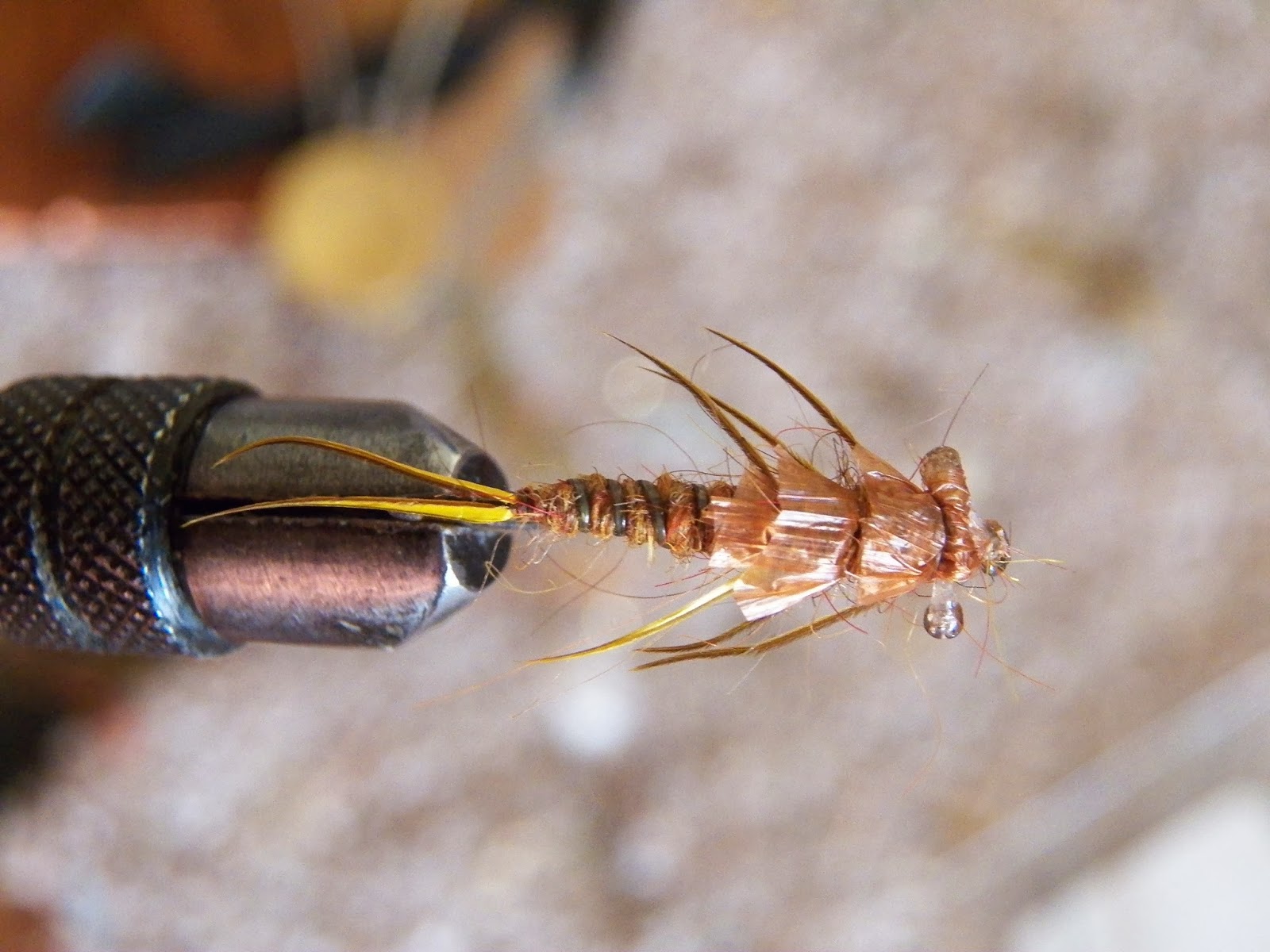 The recipe soon to come, once I have caught a fish with it.
Posted by RM Lytle at 12:37 PM No comments:

Email ThisBlogThis!Share to TwitterShare to FacebookShare to Pinterest
Labels: Flies

Today dawned warm and sunny, so I hit the streams. The first only produced salmon parr, but the second proved to be perfect. I fished upstream on the first creek alternating between nymphs and an Edson Tiger. Plenty of little salmon hurled themselves at the bright colored streamer, many jumping out of the water for it. I saw some big trout, but the bright sun had put them off the bite. The second stream was more shaded, and I found a deep bend pool to fish. At first some big browns were rising, but the wind picked up and rain started and pushed them back to the bottom. A Zug Bug did the trick, bringing a wild brown and a holdover brown and rainbow to hand. All fought valiantly and were safely returned home.

Yesterday was cold. It even snowed a little, small pellet like snow that was too light to be considered sleet. It was windy too, with 30 mph gusts whipping up whirlwinds of leaves and bits of trash. The weather was not conducive to enjoyable fishing, but only if you aren't me. I'm most comfortable with a fly rod in my right hand and my line in the other, regardless of the weather and stream conditions. The fish could care less as well, the wind sometimes brings them food, and I'm the warm blooded one. So off I went, on a hunt for fish on dammed up sections of an urban stream, with too many dams to have trout for the first 2 miles. I was looking for panfish. The first location proved uneventful, but the second was better. I put on A bead eyed fly I typically would use for carp, but it would sink fast and that would be the issue of importance in cold conditions. I didn't really work the fly. I twitched the rod tip occasionally to see if anyone was home, and two hungry fish came to say hello.

Today seemed a fine day to fish, so I headed out to a small stream. I fished upstream with dry flies but had no luck, so I went down to a very deep bridge pool. It has very little current, so I put on a big nymph and cast it out. I let it sink and slowly worked it back using the strip-tease nymphing method. On the third cast a fish took. It was a good brookie. Shortly after I hooked and lost another. The very next cast I landed a second fish, another brook trout. I got a few light taps over the next half hour but no more fish. 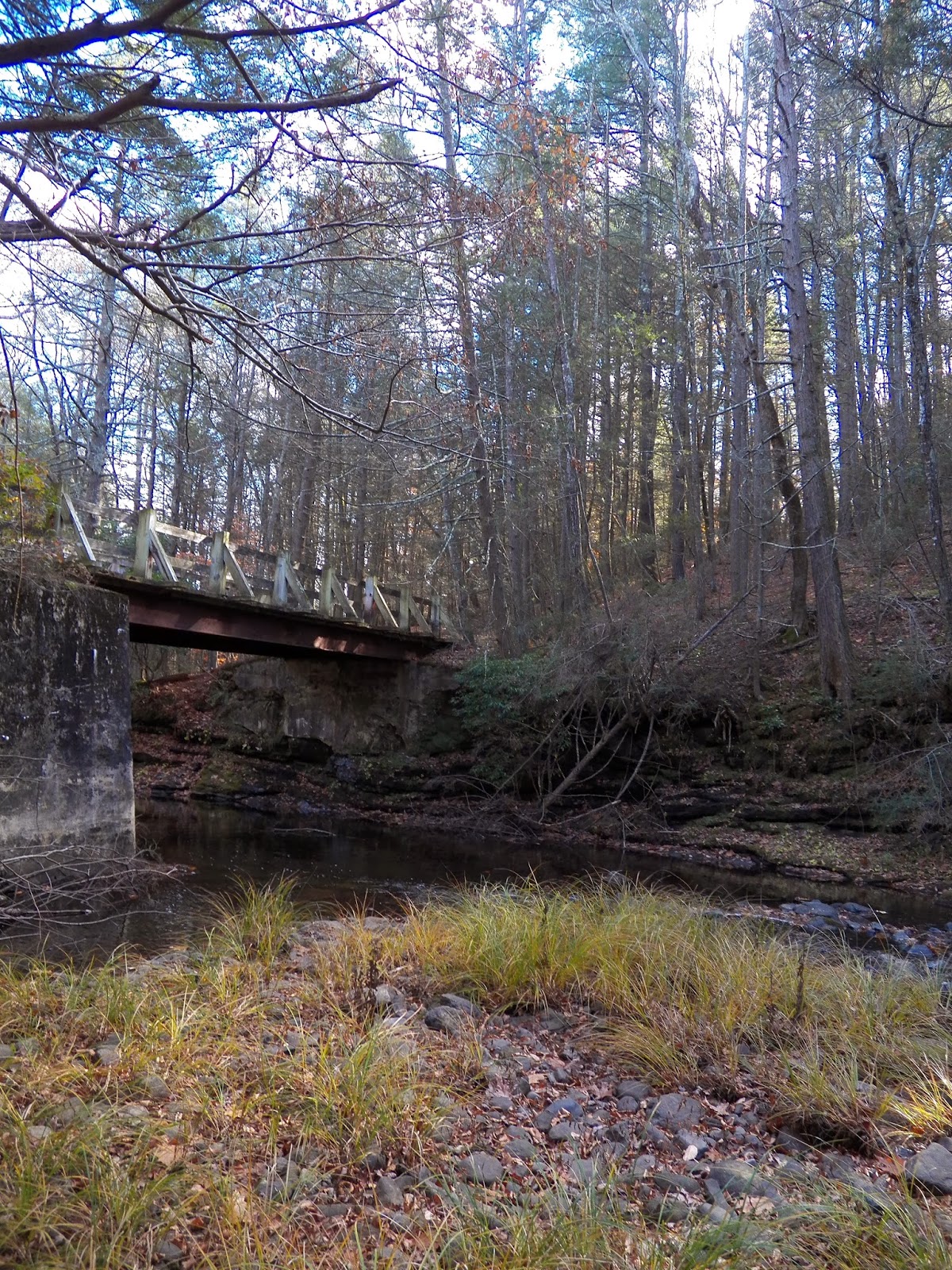 Today felt like a trout day, so I headed to the river. It sucked. 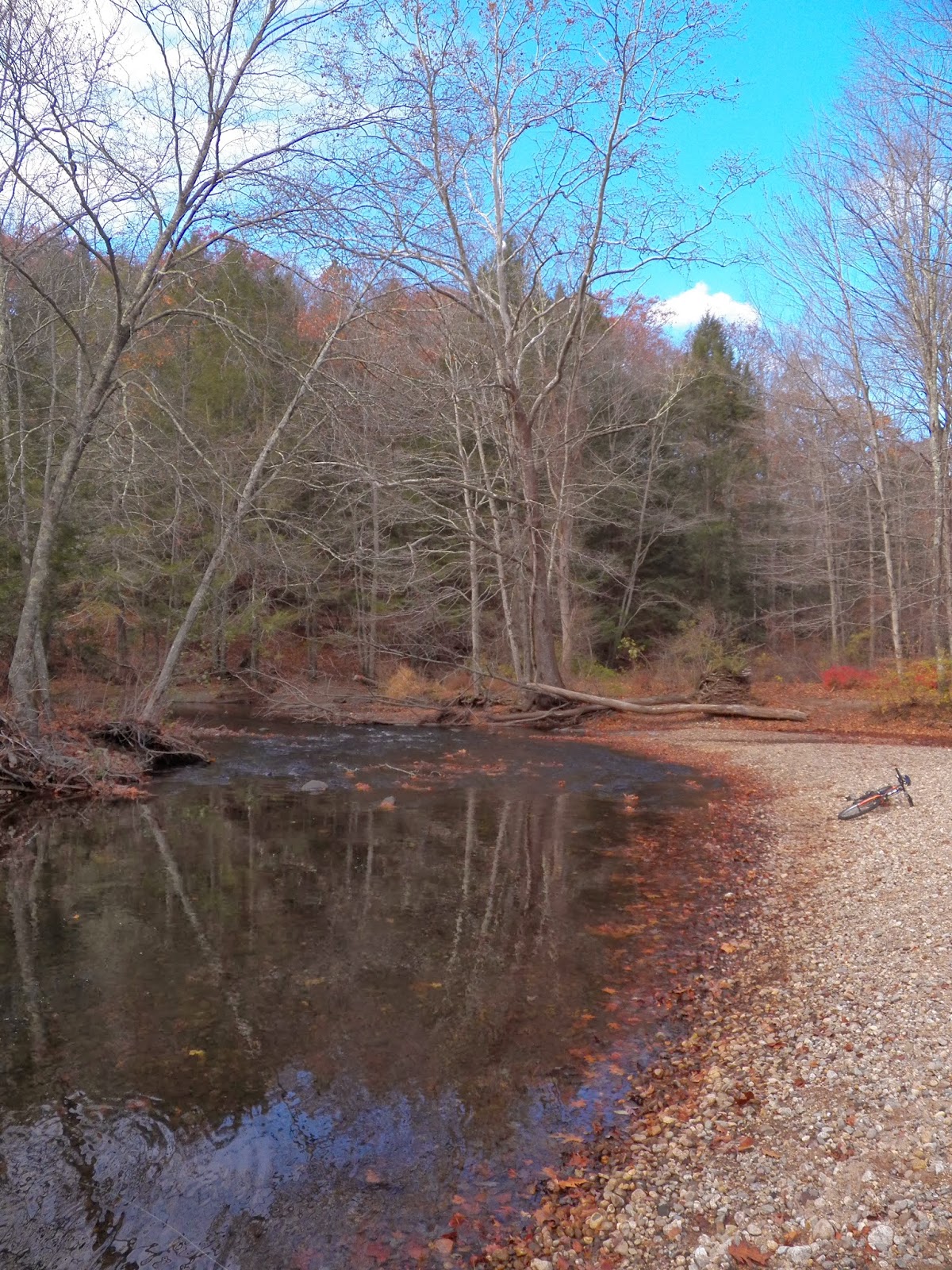 I biked past some random small streams and thought to myself  "they have to have fish." They didn't suck. The first cast with a calf tail bomber and a trout whacked it. I only briefly felt his fight. No worries, the next cast a nice little salmon parr took. I worked my way upstream to find at the head of the next pool a perfect lie. The cast was made, and a beautiful trout of sizable proportions came up and slurped down the bomber. I continued fishing with only one hit and soon reached a pool too big and slow to fish and decided to check the other little creek. It poured out common shiners and salmon parr. The only trout was seen right as I was leaving and I threw a pine cone too his feeding lane to see his reaction. The crazy little brooky came up and whacked it! I decided to come back and catch him another day.

Friday was warm, so the obvious thing to do was to go fishing. I had a short time, so local panfish seemed best. They were hitting dries, so it was even more fun. I managed to get a few of the fish that chased down and whacked my fly from a small pond and adjacent stream.