I've been on the hunt for big brookies this spring. After a number of years of less dedicated wild brook trout fishing, wherein I'd just occasionally revisited easy spots already well known to me and caught very typically sized fish, I'd got the bug again this year and wanted to find something impressive. I hadn't caught a wild brook trout of over a foot in Connecticut in quite a while. Catching fish like that can sort of just happen if you fish for brook trout enough, but I didn't just want to go out and hammer brookies every day. That isn't really my thing anymore, and I don't think it does the fish any favors. I've taken to resting streams and having a measured approach. I'm not trying to catch every brookie in the water I fish, just the largest ones. I'm also not just fishing any old water. I've come, over time, to understand what makes big brook trout in CT, and it doesn't happen just anywhere there are brook trout. If you think I'm going to just go ahead and tell you the magic ingredients, well... I'm sorry to disappoint you, but I won't. They make sense though. If you follow the natural patterns, understand the biomass factors, and think about how different habitats work you'll figure it out on your own. That's a great feeling and I don't want to deprive you of that.

Once I'd figured out the formula it was just a matter of time, and not much time. I'd stacked the deck in my favor, if I caught brook trout at all in the places I was fishing there was a strong probability one would be a monster. To catch the fish, I'd also stack the deck by using larger flies than I might otherwise. I've never been a big fly for brook trout guy, in large part because bigger hooks and small delicate fish do not mix. But I wasn't after small fish, and there wouldn't even really be any small fish in the places I was fishing. I'd fish larger streamers, mice, gurglers, and things of that sort unless I saw fish actively feeding. I wasn't taking that strategy because the fish would want really big meals, more so because I needed flies with a bit of calling power because I didn't know exactly where the fish would be sitting a lot of the time and wanted to fish in a way that would potentially draw a big brook trout from further away.

It's funny, frankly, just how quickly it came together. Of course that's ignoring the years it took to put everything in place to make it easy to do, but once I had the idea in my head it was a matter of days. The location I had the most confidence in showed me two giant brook trout on my first visit of the year, though I didn't catch either one. On my second visit, I caught one of the largest brook trout I've ever caught in CT. At fourteen and a half inches and carrying about a pound, it was an extraordinary specimen of a native salmonid. 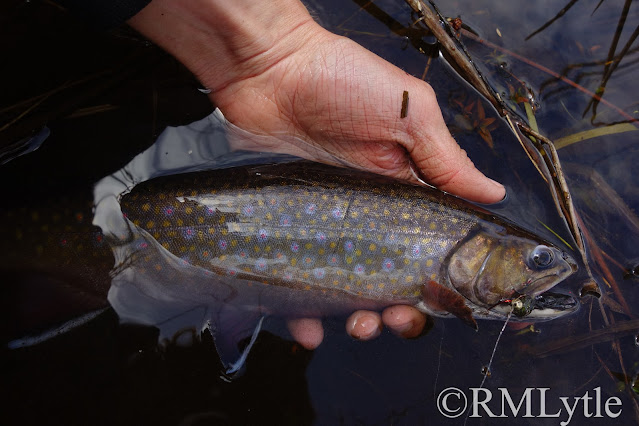 As we shift into what feels like a very early summer here in CT, I do intend to devote a bit more time over the coming month or so to these big brook trout. Since I got that one I managed a few other monsters as well, but I'd really like to break the 18 inch mark here in CT. I think it's possible, though I don't know of anyone that has done so recently. If nothing else, it's a relief to see that our only remaining wild native salmonid is doing well enough to kick out specimens as big as a pound. That certainly is a good thing.