It is so often the case that if you want to find a rare fish, you have to do close to the maximum amount of work. Come midday on our third day in Deboullie, I knew that we'd have to do a little more than paddling and short portages in the connected lakes to get a blueback. Black pond, the second smallest of the four ponds in the cluster that hold bluebacks, seemed like our best shot at these rare char. Small is good. Fewer places for the fish to be. Pushineer is the smallest pond but also shallower and far down the watershed, and therefore the warmest in the summer. Black Pond is very deep, with only a couple small stillwaters above it. It is also a little over a half mile hike one way. So it definitely isn't prone to getting as much pressure as the comparatively easy to access ponds over the ridge from it. So Noah and I made the portage up and over the ridge and down into Black Pond. It was a haul with a bunch of gear and two kayaks, especially Noah's, which doesn't drag well and is much heavier than my own. But we made it, and were soon fishing the deep, dark waters of possibly the most productive pond in the area. 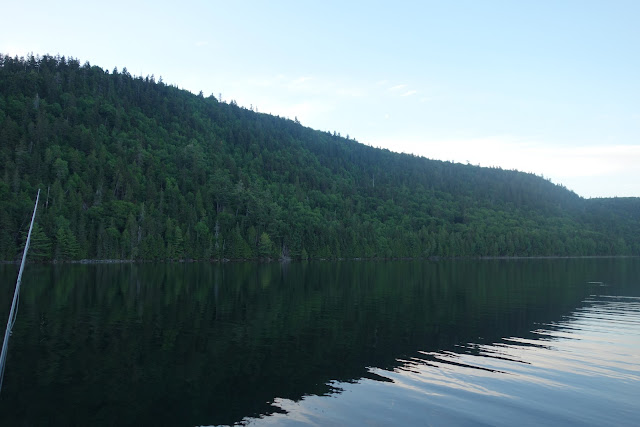 Much more sheltered and oriented differently than the other ponds, Black was flat calm. Had there been a good rise going, we'd have been able to see fish surfacing from a hundred yards away. Unfortunately, though there wasn't a complete lake of rising fish, there definitely weren't many. We worked our way down the shoreline toward the outlet, Noah fishing a jig and me fishing streamers on a sinking line. Action was sluggish. We got to the outlet and turned back around, aiming now for the inlet and deeper water. As we drew closer we started to hear the odd big splash. It was so dead silent out there, much more so than the big ponds where the other campers reminded us that other humans did indeed still exist. The lack of anthropogenic and wind noise on the other side of the ridge meant we could hear these splashed from more than 100 yards away. So we kind of had some idea of where they were coming from, but we couldn't actually see them. Eventually, not far from the inlet, We found these huge schools of common shiners. And after fishing under them for a while, a big brook trout broke repeatedly not far from me, attacking the shiners. The fish had practically been blitzing on shiners. I'd never seen anything quite like that. I fished under the bait balls for a long time with different flies trying to draw a strike. I was very surprised to find that these fish seemed unwilling to come to a perfect artificial imitation of what they were ravenously feeding on. By this time there were a few odd rises out over very deep water, so I made a couple drifts out there. No luck. I was starting to be nearly certain neither of us were going to catch our target species. I became so disgruntled by the lack of salmonid action that Noah and I both started specifically targeting yellow perch to take back to camp for dinner. I stayed with the fast sinking tip and just downsized to a little brown calf tail and olive brown ice dub micro-jig streamer. Funny enough, before I caught a perch big enough to take, I caught a small brook trout. 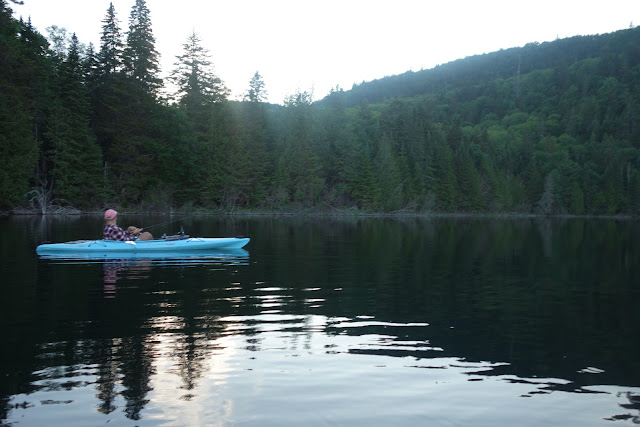 I continued working around the brush piles, catching a few perch here and there that were big enough to take. Noah was loading up as well. Then I drifted out a ways off the structure that was holding most of the perch. I got a couple bumps so I just kept doing what I was doing. Than I came tight to something that was clearly not a perch. It wasn't acting like a brook trout either. It was really making some quick, hard, deep runs. As I got it up higher in the water column and I got a bit of a look at it, my heart started to pound. In moments it was yak-side, and there was absolutely no doubt. I couldn't believe it.

I had caught a blueback trout.

Noah was a ways away from me, so I started shouting or, uh... squealing. Like a complete maniac. My voice went up three octaves. I could barely contain my shock and excitement. I jumbled my words, I started shaking, I nearly dropped my rod in the lake... this was a fish I'd wanted to catch since I was about 15. It wasn't big, most bluebacks aren't. Being mid July it was still very silvery, with just a faint yellow orange on the belly, silver and nearly spotless flanks, and a true-to-the-name blueish grey back. The dorsal was transparent and lacking any markings at all. The tail was deeply forked. The anal, pelvic, and pectoral fins were a shade of orange I'd never seen on a brook trout's fins, more yellow than pink or red. A pristine white strip edged those fins, the char trademark. This was a beautiful fish. 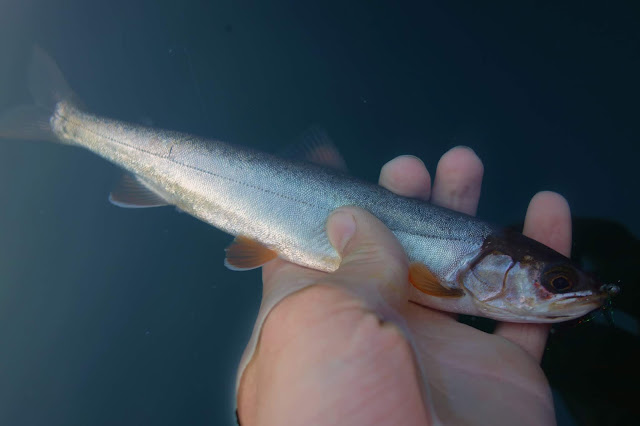 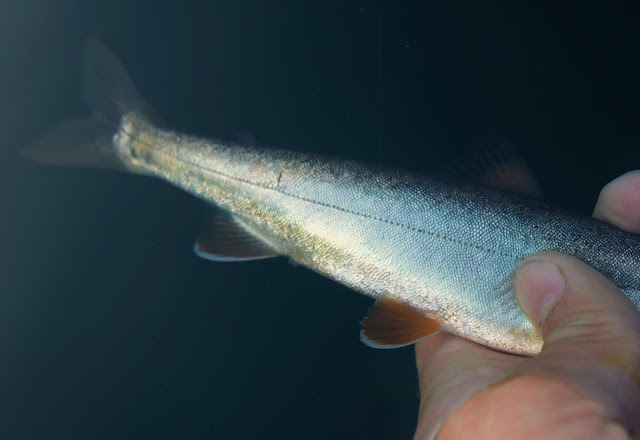 Noah and I both basked in the presence of the rarest fish either of us had ever seen before I let go and watched it go straight down into the dark. A fish that, for a long time, most believed couldn't be caught fly casting, only existing in a little more than 10 lakes in the U.S., and in low numbers in a number of those, had just been in my hand. What a feeling.

Of course, knowing that bluebacks school and all, we stuck around there for a while, hoping Noah might get one. But as the sky slowly darkened and some large unknown animal made noise in the brush up on the hill, we decided it was time to leave. I didn't know if I'd see this pond again any time soon, but I was glad we had taken the effort to reach it on this evening. Had the weather been better the next day we might have gone back, but the wind was just too much. I do, without a doubt, know that I will return there, probably more than once. And to some of the other ponds containing bluebacks that we didn't go to on this trip. I want to catch more, to see more, to hold more in my hands, because the may not be there anymore when I get too old to make the trip. Regrettably, that can be said of a lot of fish species and subspecies.

I do believe I ought to explain why I've been so open with the location we were fishing here. There are a few reasons. First being that there really isn't a good way to conceal it without drifting so far off of the real story that it just wouldn't be as impactful. Second, this is no secret. If you want to find out where bluebacks are found, a search online will reveal literally every lake in Maine that contains them if you look long enough. Third, it isn't free or easy to fish this place. Right out the gate, some people just won't want to go through the trouble just for the slight chance at these fish. Those that do are likely the kind of people that already have a deep respect for them and the wilderness they live in. I don't mind people that care fishing for such rare and sensitive fish. They need advocates. Climate change threatens their coldwater pond habitats. "Bucket biologists" could wipe out a population in a matter of years. For some ludicrous reason, Maine still allows people to keep blueback trout, counting them towards their brookie limit. Going through the work it takes to catch one and then getting to briefly hold such beautiful animals makes it personal. It makes it all the easier to fight for their protection.

If you respect the animal, and respect where it lives, and are competent enough to handle and release one safely, please do go to these places. Try to catch a blueback.

But if you can't respect blueback trout, or any other kind of fish for that matter, and have the gall to sully the places they live with your presence....
You have made an enemy of me. And that's a position you don't want to be in.

If you enjoy what I'm doing here, please share and comment. It is increasingly difficult to maintain this blog under dwindling readership. What best keeps me going so is knowing that I am engaging people and getting them interested in different aspects of fly fishing, the natural world, and art. Follow, like on Facebook, share wherever, comment wherever. Also, consider supporting me on Patreon (link at the top of the bar to the right of your screen, on web version). Every little bit is appreciated! Thank you to my Patrons; Erin, David, john, and Christopher, for supporting this blog.