Dredging For Catfish & Carp on the Fly

Most fly fishing for carp and catfish is done by sight. These species don't have the prey drive that other fish species do, so getting them to move a distance is usually a hard ask. That's often what necessitates sight fishing. If you can see the fish, or at least see where a fish is, you can put your fly on its dinner plate. There are, however, scenarios that both allow and necessitate blind casting. Narrow river channels often offer opportunities to dredge bottom and pick up large fish completely blind. This is something I like to do both on my own and with clients when conditions aren't good for spotting fish, as it can often produce some larger carp and catfish than sight fishing does.

Fairly recent'y I took advantage of some decent post frontal conditions to get on the blind bite. The strategy was to post up on channel edges, anchoring the canoe in place with the push-pole, and slowly pull heavy flies through the channel itself. I fished a short two piece leader, 20lb-15lb, and Drew Price's Mr. Bow-regard on a clear intermediate, 8wt. The retrieve was just as slow craw. Takes weren't necessarily frequent, but if we'd been sight fishing that day we'd have been SOL. The fish just weren't shallow, though they were feeding. 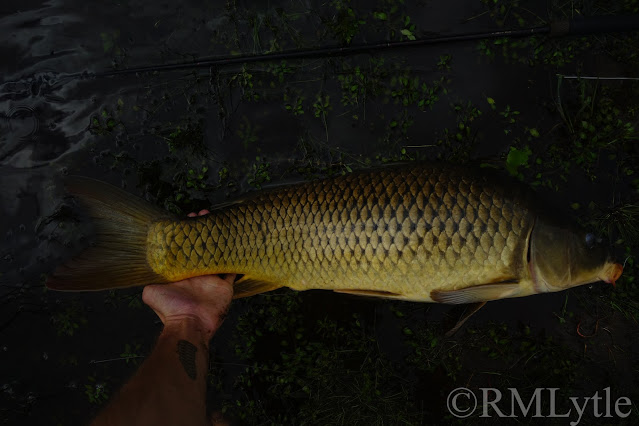 These were typical conditions to get carp and cats feeding in the channels, low-ish light, high pressure, and stained water. That first fish was a brutish near-20 pounder that took the fly quite subtly just off the bottom then but up an impressive fight.The next one hit pretty hard and began to fight very much like a cat. Instead, it was just quite a small carp. 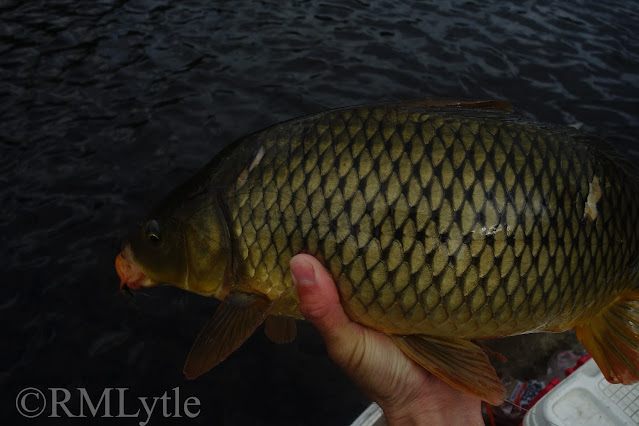 Effective flies for this strategy are generally 1.5-3" long, dull in color, and heavy. I fish buggers, slump busters, the Mr. Bow-regard, and a few of my own patterns to good effect. Patience is key, as you need two thing to meet in close proximity without too much control over where the fish actually are in relation to your fly. All you can do is get your fly near bottom and fish it slow until it finds a fish. It's easier to explain and demonstrate the principles and intricacies of this tactic as well as where it is best employed on the water, from my canoe. These are fisheries and strategies I don't really see anyone else utilizing with fly gear, or artificials at all for that matter. And yet they're incredibly productive and fun.

After those two carp, I was really hoping to get a good channel to eat the fly. I slid the canoe quietly back up to the top of a deep cut and anchored again. Maybe 10 minutes later I got a light grab and set into a powerful fish. This time I was much more sure it was a channel cat, though the previous small carp still made me second guess it. Sure enough it was a cat, and one of the better ones I've caught this year. With only two exceptions, every time I've set out, either just myself, with a friend, or with clients to get a channel cat on an artificial or fly we've put one in the boat. I don't think there's a single other guide in southern New England that could offer such a consistent and reliable opportunity at catfish on fly, and they're often pretty big. I just need to find the sort of weird client that is actually into that sort of thing. 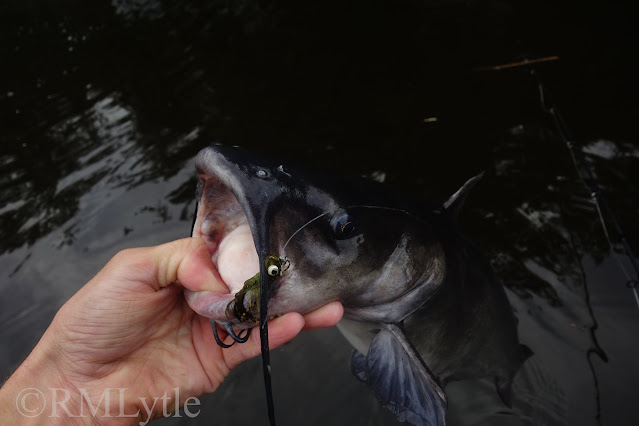 Interestingly, though I can just about guarantee catching both carp and catfish virtually every trip, the catfish fishing quality varies year to year. Last year, likely due to the numerous high water events, the channel catfish were going crazy. There were days I caught more than 20, all on fly. This years severe drought hasn't seemed amenable to them. I think most have remained in the deep shelter of the larger river instead of wandering into the tributaries en-masse to feed.

It's very interesting seeing large yearly pattern shifts of this nature. Sometimes it very literally drives fish abundance. Though that can result in inconsistency and years that just aren't going to fish as well no matter what you do, that's a big part of the intrigue. There's always more to learn.