Sorry for the atypically long gap between posts folks, but this one is the reason why and I think it was worth it.

I've been watching friends post big trout and salmon from Lake Ontario tributaries for years, and though it's not that far really, I just never got the opportunity to go. Then my good friend Rick, who lived in western New York for a long time and fished the Salmon River and other tribs often but hadn't made the run from CT in four years, had a hankering to go back and invited me to join him.
I'd finally get my shot... winter steelhead. Cold water, cold air, slow days with precious few chances at big, beautiful, powerful fish on light tackle. This is a fishery where dreams come true just as easily as the crushing sense of the difficulty of it all sets in. You could cast all day long in the freezing cold and not touch a single fish. But if you're a fly fisherman in the Northeast or mid Atlantic, you've heard all that before many times, and I don't want to continue with such redundancy. 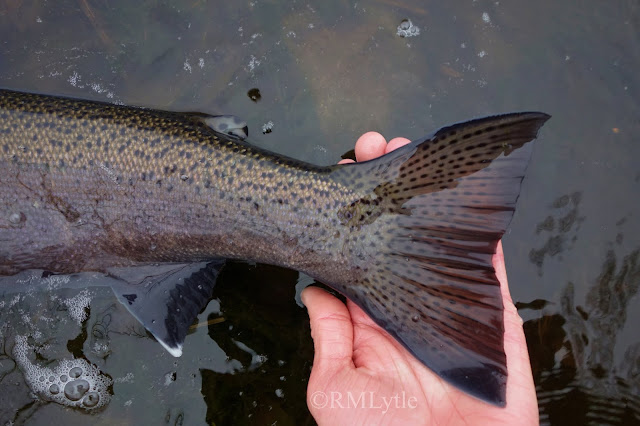 This was a whirlwind one night trip, Fishing from 10 :00 something on Thursday until dark then dawn till 2:00 on Friday. But Rick knows what he's doing and I of course did tons of research and felt well equipped enough. Though nymphing doesn't really speak to me for these big truly regal animals like spey casting and swinging big flies does, I also didn't want to go home without catching one. Swinging big flies is a high risk high reward tactic, if I had done it the entire time and come up with even one small steelhead it would be one of the most exciting achievements in my fishing carrier. But I am still very much a novice at those tactics. My spey cast is getting better but I'm still not happy with my swing depth and speed control at all, and even less so on water I've never fished. So I was pretty well prepared to just tight-line and indicator nymph on this trip and get the lay of the land. I told myself if I caught one on the first day I'd spend the second swinging intruders. But that was a lie. I'm not that strong willed.

We started out at a super secret spot that nobody fishes (wink), the Altmar Bridge. The air temperature was in the mid teens and the water was in the mid 30's. It took me a very little time to figure out two things:
1: If I was going to stick with tightlining I was going to have to deal with ice buildup on the leader that I had to remove regularly to keep it from dragging my fly.
2: I had a leak in the left foot of my waders.
2b: I was going to have a very old foot for the rest of the trip.
The trickle of frigid water found it's way through my wool sock and polypropylene base layer not 20 minutes after I'd started fishing and I swore to myself. These weren't old waders, on the contrary... they were two months new. Yeah I run any gear I buy through the ringer, fishing vastly more and harder than even a lot of very dedicated fisherman, but really? Two months? That was a very annoying way to start a winter fishing trip, but I would put up with it. I don't let that sort of thing ruin my fishing. Things improved when I looked upstream and saw Rick's rod bent double. I quit what I was doing and walked up to ready the net and my camera. 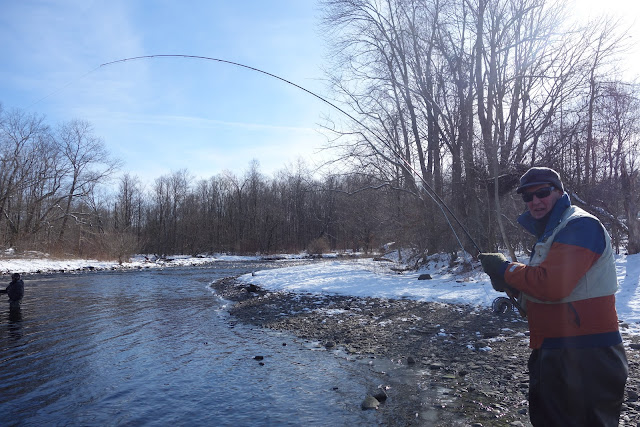 The fish was pretty well behaved, and I eventually sunk the net around the first steelhead I'd ever seen up close in person. And, actually, as many steelhead as Rick has caught this was his first on the fly rod. It took a BHHESH I'd tied. And it was under an indicator, so after we quickly photographed and released the fish I stuck an indicator on myself, sick of having to remove the ice from my leader. I had to clear the guides regularly anyway, I decided I may as well decrease my work load. I hadn't had the indicator on for 20 minutes when it plunged under. I swung and set my rubber tailed BHHESH in the mouth of a large, grumpy something. Line dumped from my reel as the fish made its initial run. It, though larger than Rick's, was also pretty well behaved. After some give and take, some rolling on the surface, and a lot of head shaking, my first steelhead ever, a 30 something inch dark buck, was in the net. 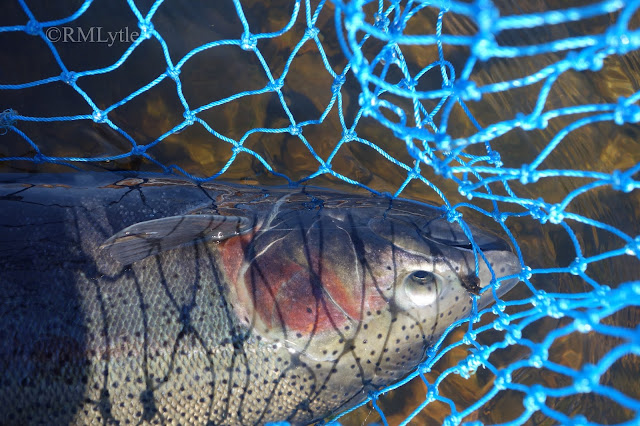 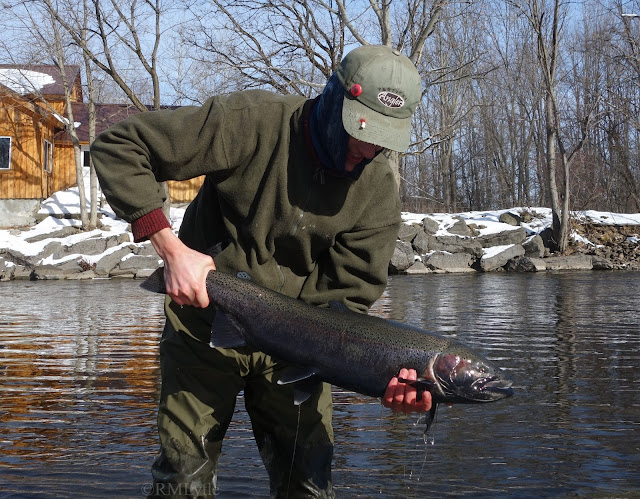 As much as I'd have preferred to have caught that fish swinging a sexy black and blue tube fly, the method I'd deceived it with wasn't without its intrigue. I'd caught that big animal under a small indicator with a size 12 nymph and no added weight. That elephant ate a peanut, and I won't lie, that's really cool.
The rest of the day was pretty uneventful for us in terms of hooking fish. We had lunch at the Altmar Hotel, then I ran into Salmon River Outfitters to get something to patch my waders with. "I'll just give you some tape", one of the guys said. I left with a length of duct tape and I bought a couple flies, not wanting to leave without paying for something. We fished some new water and, at dusk, were back at the bridge, where big fish were rolling but not eating. Warming up in our room at Whitaker's in Pulaski, I figured out where my leak was. In the morning, after it dried, I'd try to patch it. 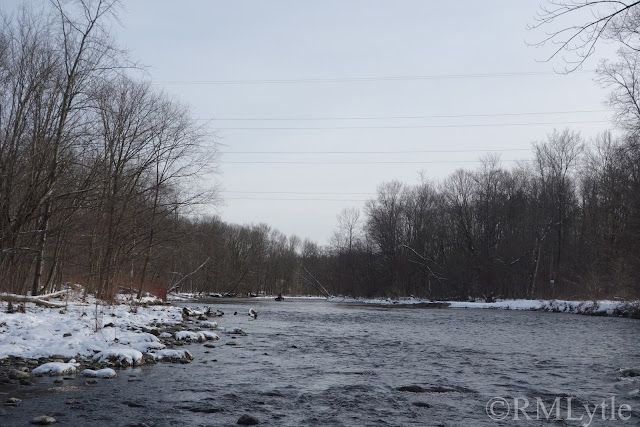 The next morning we were up before the sun and on the water before it too. My patch job proved not useless but not completely successful either, I still had cold river water where it ought not be. I wanted to stick it out at the bridge, which had turned on quite well the day prior, but time ticked away and though people were piking the odd fish here and there, my feet were getting cold and I just didn't feel "the feeling" there. Rick hooked and lost a big fish before I headed off to find some relative solitude and a place that felt right to me. I found that place, and asked the spey caster that was wading upstream along the edge of the run if he was going to make another pass. "Yeah, I just ran it with pink and white, now I'm going to give it a pass with black and purple". I left it to him and fished the head of the next pool, anxiously waiting for him to get to the bottom. As soon as he did I made my way back up and got myself into a good position to start plying the cold waters. It didn't take me all that long to hook a fish, but it was a tiny little thing of maybe 16 and a half inches. It was beautiful and chrome and incredibly spastic, but not what I'd hoped for out of that spot. 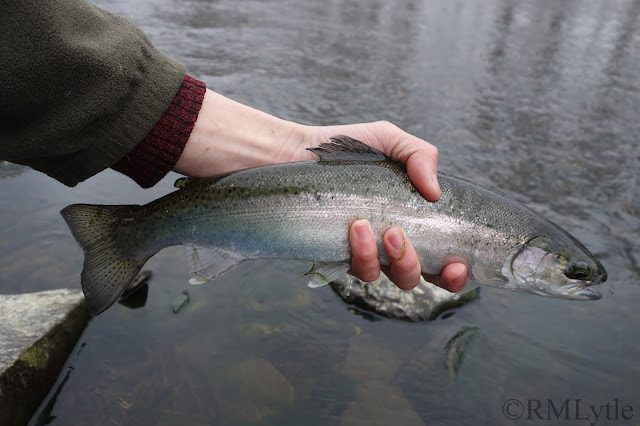 I ground away at that spot for half an hour more and changed from the bead head Red Dart I'd been using to am unweighted peacock body stonefly nymph and a pair of shot. I started counting casts to keep focused. On cast 38, the indicator hesitated like it had many times before. But this time, when I set the hook, instead of it being a rock or a stick or a lump of rotting salmon, I set the hook into a steelhead that was absolutely furious that I'd just interrupted his day. There was no time for me or the fish to figure out what was happening, it immediately hauled ass towards the other bank. He thankfully stopped when he got there rather than diving into any root masses, instead slowly coming back my way. He went back to exactly where he'd been when I hooked him and then decided not to budge at all. I strained my six pound tippet and eventually slowly started pulling him to me. He got close, and with not enough distance between me to have a lot of pressure on him, we were in a brief stalemate again. I took a few steps back and the sound set him off. He we charging down and across the pool, tail walking and sort of half-jumping, a sight to behold. He was at the top of the riffle now, and I started to get him into the shallows now and then. I didn't have the net or anyone around to help though, and that was a big disadvantage. On of those times that I got the fish, which really wasn't that big, into the shallows, he started death rolling and wrapped himself in the leader before making it back into water deep enough I could use. I chased him down the riffle, falling and bashing my thigh on a rock once, down into the next pool. There was a slack spot there separated from the river itself by a shallow bar, I knew I would beat him there and I did. When I got my hands on the fish and saw that state of the tangle around in I couldn't believe my luck. My tippet was wrapped four times around this steelhead's left pectoral, with a completely slack length of line between int and the fly which was just barely in the skin of his teeth. Had that fly popped out and the tippet unwrapped, as it did while I walked the fish up into shallow water to photograph him, this would have been a very different story. Luckily he didn't struggle enough to get away from me then, though I was taken aback by how much energy he still had in him after that battle. 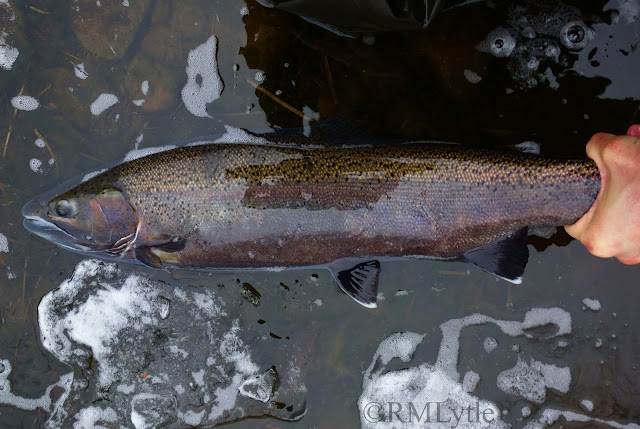 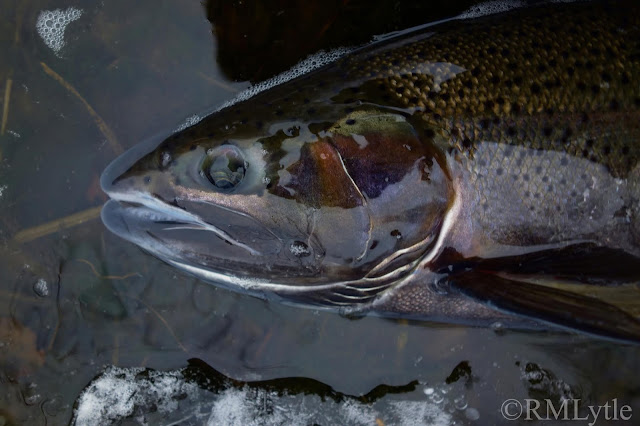 And folks, I'll leave you that that. That fish, though it was smaller than my first, was the fish of the trip for me. Thanks so much Rick for inviting me along. It was a blast. 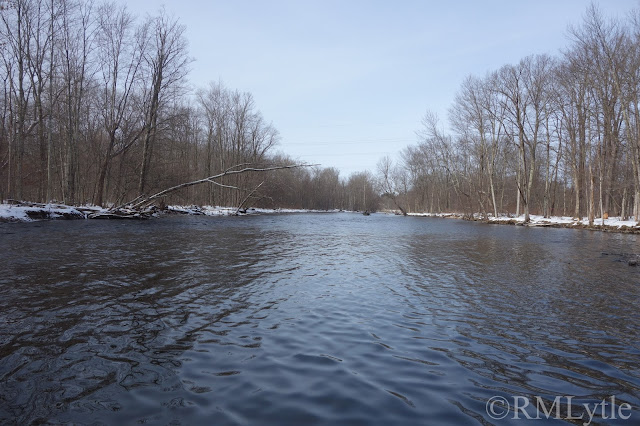 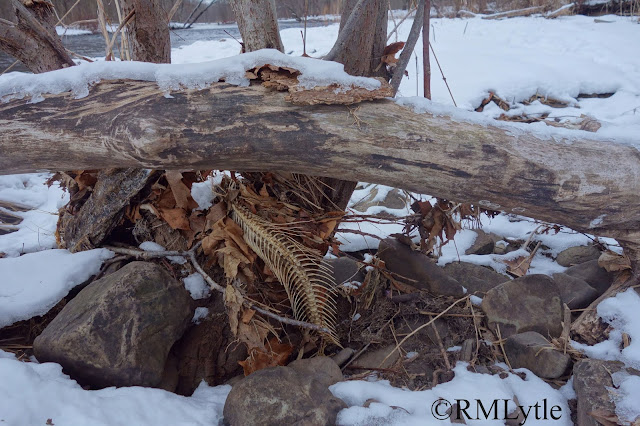 Thank you to my Patrons; Erin, David, John, Elizabeth, Brandon, Christopher, Shawn, Mike, Sara, and Leo for supporting this blog on Patreon.
Posted by RM Lytle at 1:43 PM