Needlefish, Blue Runners, and Squid on the Fly

Launching my kayak on one of the last legitimately hot days of the year, I expected to get into a variety of fish species and possibly some very unusual ones. What I was really looking for were Spanish Mackerel, and despite the fact that I found some of those pretty immediately, I couldn't catch the damn things. What I could catch were loads of blue runners. Blue runners are a fairly frequent late summer and fall visitor to Connecticut waters, though seemingly every year I seem to see a little bit of the same thing on social media... folks very surprised to see these fish around these parts. It's kind of funny how little fisherman actually know about fish, particularly fish they wouldn't fish for. Of course, I fish for everything, so I make it a priority to know as much as I can about as many fish as possible, and I knew blue runners regularly make there way inshore from the gulf stream each year when the water temperatures peak. 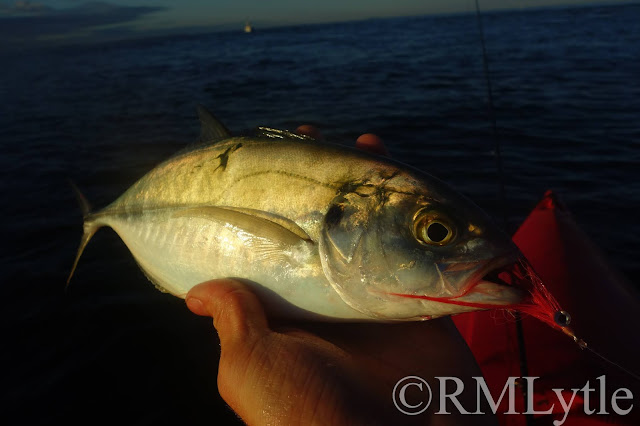 Mixed in with the blue runners, I got quite a few Atlantic needlefish. Needlefish are cool animals. I like strangely shaped fish, and needlefish certainly fit the bill. If you think pickerel are long and narrow, well... needlefish are aptly named. 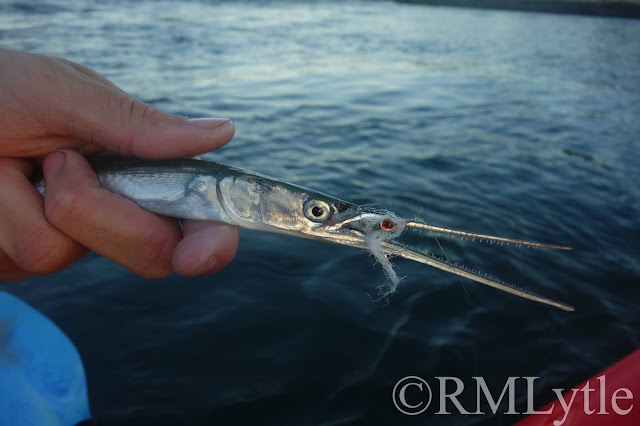 Needlefish are also one of the small handful of fish I've caught that actively try to bite you when you catch one, so be mindful. They have lots and lots of teeth, and 'needle' applies just as well to those as it does to their needle jaw construction.
After a while the sun seemed to shut off the surface activity and I switched to bottom fishing with a sink tip and a Clouser Minnow.  The conditions weren't ideal for kayak bottom fishing with a fly rod because there wasn't a breath of of wind. I rely on having a drift for this sort of fishing, because if gives me a lot more time with my fly down in the zone. Without a drift it was a fan casting game, which can work but isn't the most methodical way to cover water when fishing for scup, seabass, or fluke. It did work though and I was able to get some scup to bring home and eat. The most interesting result, though was completely unexpected. I kept having very strange takes. Initially I just thought I was catching bits of weed, because that's all it felt like. The fly kept coming up clean though. Finally, as I brought the fly up from the depths, I saw the culprit. It wasn't a fish at all, actually. It was a cephalopod. I'd wanted to catch a squid on the fly for a long time, and suddenly I was being presented the opportunity.
The problem I had was trying to stick the thing with a single heavy gauge hook. If you've seen anything designed for squidding you understand the issue. You need  multitude of fine, needle-sharp hook points to reliably hook squid. Luckily this odd little creature seemed very determined to eat my Clouser and I eventually got the hook in it. 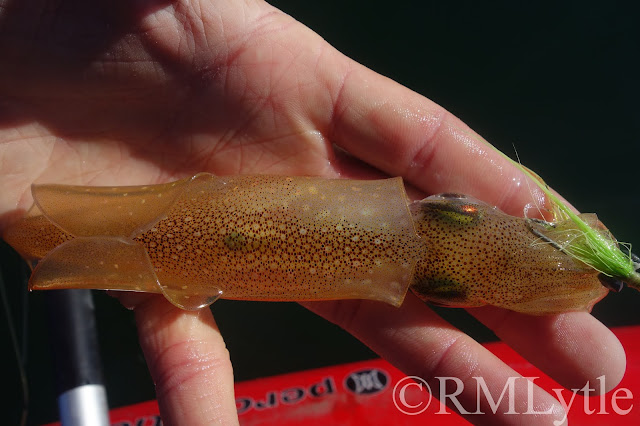 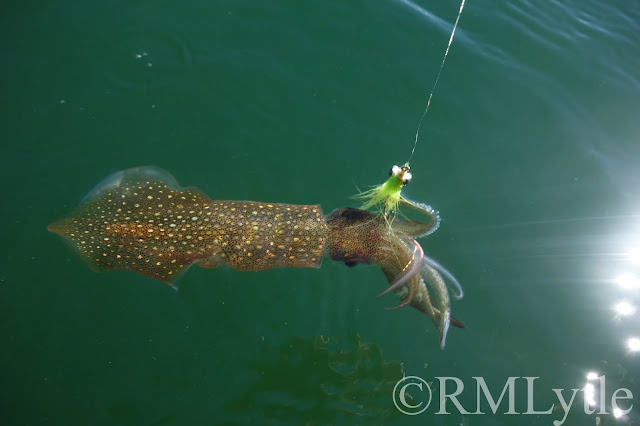 Getting to hold this utterly bizarre and shockingly intelligent critter for a few moments was the highlight of the day. I watched it rapidly changing color, manipulating its arms, and looking around at an alien world. Cephalopods are absurd animals, and it's remarkable to me that they will actually take an artificial lure given how intelligent they are. Maybe it's just a curiosity response? There's no way they still don't think a fly or lure is a real fish when they grab hold of it, their sensory system is much too complex. I have no idea, honestly. Squid are an endlessly intriguing animal. Though I certainly didn't get anymore that day, I intend to in the future. And it'll be with a fly rod, and some very odd and unique flies.

Fish for the love of fish.
Fish for the love of places fish live.
Fish for you.
And stay safe and healthy.
Thank you to my Patrons; Erin, David, John, Elizabeth, Brandon, Christopher, Shawn, Mike, Sara, Leo, C, Franky, Geof, Luke, Streamer Swinger, and Noah for making Connecticut Fly Angler possible. If you want to support this blog, look for the Patreon link at the top of the right side-bar in web version.
Posted by RM Lytle at 11:27 AM