Denizens of the Dark

I like night fishing a lot. Perhaps it stems from my favorite part of fishing and fly fishing in particular: the take. Seeing a take is great and fun and often spectacular, but what makes fly fishing so attractive to me is the direct connection to the line. A grab on a tight line is transmitted through the line right to my hand. At night, this is intensified. The angler is forced to fish in such a way that they can feel the take, otherwise they probably won't know it happened. Without sight and with limited auditory signal, every fiber of a good night-fisher's being is focused on feel, and when that line comes tight, the feeling is electric. Few fish are quite as perfectly tailored to this as striped bass.

A few weeks ago, Garth and I went out on a very dark night to chase a tide that I knew would have the fish chewing. The window was late or early, depending how you look at it, because our trip spanned two calendar days. We waded out into water very familiar to me. I knew where the muscle beds were. I had probably stood on every rock at least twice already. I'd caught plenty of fish here. This was one of those spots that feels like home- where I'm as comfortable wading into the dark as I am swimming to the rocks on a high tide in daylight. It also holds promise of big fish. At first that wasn't what we were getting. Some of the fish were nice, but not impressive. A couple small bluefish were mixed in with the schoolies to make things a bit tricky. Don't get me wrong, I adore bluefish, but small ones can be an annoyance at times. I don't treat them poorly- I have too much respect for them as a species. I dislike when other anglers hate on bluefish. But a few shredded flies made me wish they'd chosen some other area to hunt on this night. 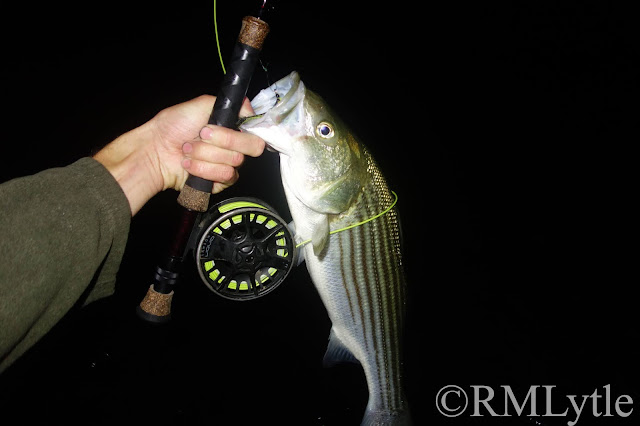 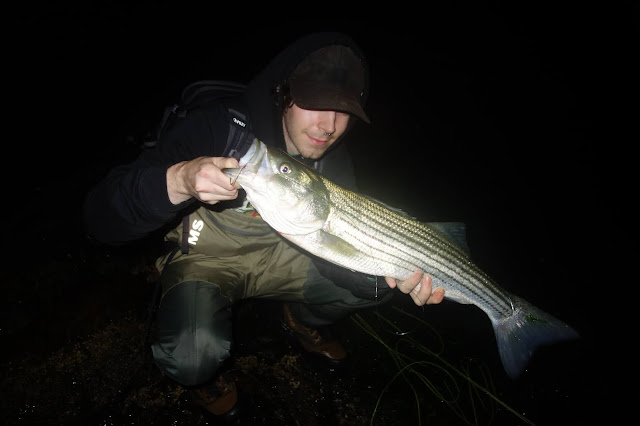 After a spell messing with those smaller bass, I could feel the rocks way out calling and decided to make the cautious walk out onto the bar. Once positioned on a particular rock, I made casts out over a deep trough. I'd only made a few before I felt that electric pull. I jammed the hook home and went about the process of beating a quite nice striped bass on my 7'10" 9wt, a fairly easy task to be honest. When I got her to the rock and put light on her, I could see that it was a very respectable fish of about 35 inches. I had Garth lip her for me. Being a novice bass angler, this did not go well as he dropped my fish after the fly had already left her lip. Though Garth felt the need to apologize profusely, I told him it was alright, it was a caught fish. The rest of the tide proved that there were more quality fish to be had out there, with a good number of slot-sized bass coming to hand. I fished two patterns, a Tabory Snake Fly and a large Bulkhead Hollow Fleye. As I generally do at night, I retrieved at a snail's pace if at all. Why retrieve if the current can do all of the work for you? A lot of the fish came in less than two feet of water; some of them were hunting right on the bar itself. 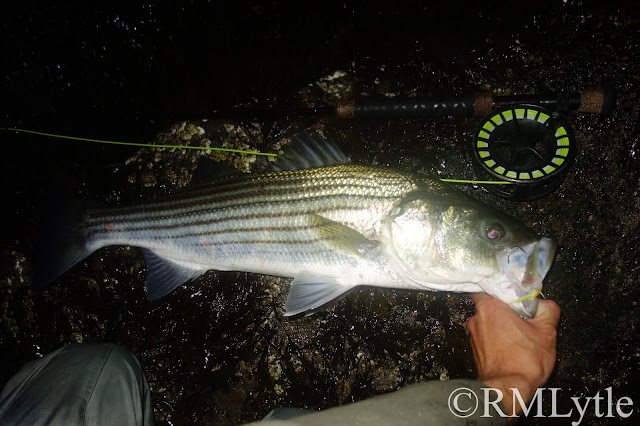 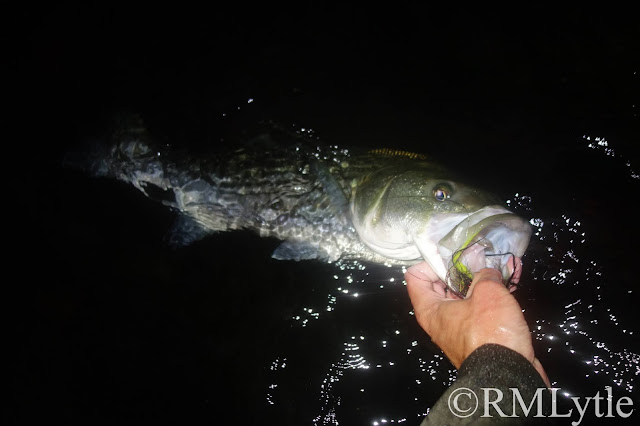 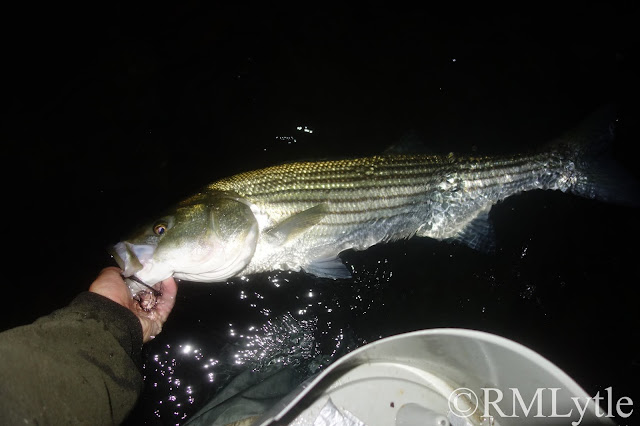 Of course, I hoped for a giant. Really huge striped bass don't come easy or often, much less on the fly. It certainly could have happened on this night, and I know a few of those giants were around. It takes patience and a keen understanding of the fish and their habitat: something I have, but not nearly to the degree I'd like. I'd like to be as much a denizen of the dark as the cow bass themselves... often lurking, rarely seen, knowing exactly how and when to capture my target.

Fish for the love of fish.
Fish for the love of places fish live.
Fish for you.
And stay safe and healthy.
Thank you to my Patrons; Erin, David, John, Elizabeth, Brandon, Christopher, Shawn, Mike, Sara, Leo, C, Franky, Geof, Luke, Streamer Swinger, and Noah for making Connecticut Fly Angler possible. If you want to support this blog, look for the Patreon link at the top of the right side-bar in web version.
Edited by Cheyenne Terrien
Posted by RM Lytle at 2:50 AM