Recently I took a quick ride south to a park pond. I was after an invasive species. I often fish for non-native and invasive fish, as there are plenty of them around (definitively, of course). I don't fish for this species that often though, as they haven't really taken hold here in Connecticut just yet. In other parts of the country, they've filled significant niches, displacing native species and causing ecological issues, as an invasive must do to be designated as such. As with other cyprinid species, goldfish in large numbers can cause increased water turbidity due to their bottom-based feeding strategy, diminishing plant life and degrading water quality. These negative impacts could well happen in Connecticut if they are allowed to spread. Concerningly, two of the places I know of that contain them drain indirectly into the Connecticut River. Fishing is not permitted in either and it seems the goldfish are welcomed by those managing those waters. In another case, a pond had a large number of big goldfish that were thankfully eradicated before they spread into the river below. On a couple of occasions I've seen individual goldfish in rivers where they were likely dumped as unwanted pets. This day, though, I was heading to an isolated pond where the goldfish couldn't leave. They still shouldn't be there, but it's less of a concern for spreading.

This pond ecosystem itself is an odd one. It contains a single large common carp, western mosquitofish, and the goldfish as the non-native species. For natives, it contains pumpkinseed sunfish, golden shiners, and brown bullheads. Being a tiny, man-made pond it doesn't represent a great example of how these species would interact in a natural ecosystem, but the golden shiners seem to be quite stunted there and rarely attain the sizes I see in similarly sized waters that don't contain goldfish or mosquitofish, so maybe there is a negative impact at play.

The goldfish themselves are finicky creatures and tough to fool with a fly. They often school up tightly at the surface in the spring and sit motionless, just sunning themselves. When they aren't doing that, if you don't chum you won't see them. At all. They may as well not be there. I wasn't prepared with chum so it was a good thing they were sunning. That didn't make it an easy task though. I spent the better part of an hour fishing to them with unweighted nymphs, soft hackles, and a few dry flies. I had them move to the fly numerous times but discerning the take is often the hardest part of the whole deal. I rarely feel it, and with goldfish the size of these at a distance more than 25 feet seeing the exact moment they nip the fly is a real trick, one I usually don't perform well. Eventually though I usually manage to make it work, and this time I did get a nice orange one. Only the one, but I'll always take one over none. 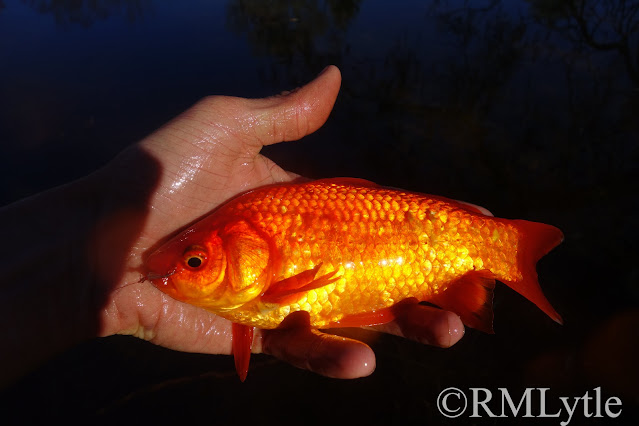 Goldfish are tough to get a handle on once they do take over. As is often the case with similar species, angling can't really stop them, so even if you kill every one you catch you aren't doing any good. Because of the habitat they spend most of their time in, mechanical and chemical methods of removal often either don't get them all or are too indiscriminate. So the best strategy is actually curbing future infestations. Anglers should report seeing goldfish, especially in interconnected waterways, to their state environmental protection agencies. It's also important to pass on information and educate, since goldfish are a common pet that is all too often released into the wild. The ramifications of goldfish taking over a watershed are not insignificant and should be taken seriously.