The Prettiest Brook Trout in Connecticut

I first met Alan Petrucci at the Comstock Covered Bridge. If you live outside of central Ct you likely don't know what that is, but it's well known here. The Comstock Bridge is lovely restored relic of a by-gone era, crossing Connecticut's Salmon River. I stood near it's west entrance, having just walked there from my home, at the time about four miles away. Connecticut Fly Angler was in its infancy then, being written by a kid trying to sound like he wasn't a kid. I didn't even have a drivers license yet. I was finding fishing spots by shear physical effort in those days, looking at maps and walking or biking as far as I could. I didn't know many other anglers. But there was this guy writing this blog called Small Stream Reflections.

I almost idolized Alan. In those I was completely obsessed with small stream and wild brook trout. I think it was because such pursuits felt almost childish to me. I believe that play is intrinsically important to humans well beyond childhood though society today may try to beat it out of us. And brook trout fishing felt so much like play. It reminded me of my formative years, when my mother would bring me and later my brother too to state parks around my first home; Franklin, Pennsylvania. Playing in creeks was an integral part of my upbringing. Flipping rocks and looking for salamanders, catching crayfish, and watching fish were the most important tasks. Small stream fly fishing felt more like that than other hobbies, and it seemed to me that this Alan Petrucci had held onto that simple, childlike joy. I wanted to fish with him.

I recognized Alan's vehicle immediately, that little black hatch-back with the BRK TRT license plate will live in my memory forever. He parked and walked over to introduce himself. I was an awkward teenager then, and I recall acting like it. I was bad at talking to new people then. I'm not sure what Alan's immediate impression was though hist struck me. Alan was a quiet man. No word he spoke was unnecessary. If he wanted to be funny, he was funny. If he wanted to be serious, he was serious. But generally he was a quiet man and that aptly carried over to his pursuit of small stream trout. We got along well, possibly because I was old for my age. Or perhaps he was young for his. Our appreciation for the environment where brook trout live, which Alan called "Brook Trout Forest" was really what brought us together. It was a simple, un-fancy appreciation of the natural and small. Brook trout in CT are not big, and indeed Alan always found the smaller char far prettier. He'd caught large ones, stories of which he told me while we drove to a new stream. "Those are ugly," he'd say, "those big males... big and ugly."

Alan seemed to know every stream. As he drove me to a place I'd never been he'd point out road crossings of other streams and ask "Ever fish down there?", and he'd always have a few words about each one. He'd describe a wild brown trout he'd caught, gesturing with his fingers to show the size, or describe the colors of the brook trout. I realize, now, that that's what I've become since. I already covered water beyond my reasonable means then. Spurred on by Alan and his apparent ability to find a brook trout anywhere, though, I began scouring with a fine toothed comb, and now much like Alan I have quiet anecdotes to fill in what had been holes on my personal map. He and I always talked about new streams. He was an old man then but he was not done exploring. He wanted to know what places held these wonderful fish and what didn't, as did I.

We were winding through a hemlock forest on one of the prettiest roads in CT when Alan looked over and said "I'm taking you to a stream that has the most beautiful brook trout in CT". Soon we arrived at a tumbling brook full of plunge pools. Alan was right. The brook trout there were some of the most colorful I'd seen anywhere. 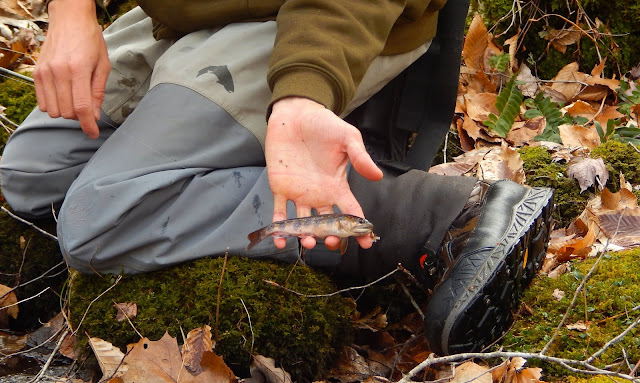