I learned the ropes of striped bass fly fishing in a localized area on Long Island Sound. It was the perfect training ground, with tidal creeks, rocky points, beach front, and sand flats all in close proximity. Many parts of the Connecticut shoreline have all of these geographic features within close proximity, but I stuck with one area initially. I gained confidence in this area, as there happened to be a lot of fish there that year. There were even some pretty nice fish in the mix, and some encounters I had that year will stick with me for a while. I was ecstatic with what I'd found in this fishery. I made the faulty assumption that it would always be that way.

The next year things were a little different. The tidal creek that had been the epicenter of my fall run the year prior had some fish but very few. There were some nice fish in the spring but the fall was underwhelming. These spots then wouldn't produce well for five years straight. I began to think that first year would never be repeated. Though some years saw good numbers of bass, especially small ones, there was never a lot in that specific spot.

Then came the fall of 2022. October was one of the most spectacular- probably the most spectacular -striped bass fishing months I'd experienced. For a while I was following one body of fish almost daily, and it was epic. Then I sort of lost track of them. Deciding they must have moved on, I began driving around and stopping to watch for birds or blowups on my daytime missions. Two days after I'd lost track of the fish, I crossed one very familiar bridge and turned my head to see a massive cloud of birds over the creek. I whipped a u-turn as soon as I safely could and parked. Not even donning waders, I grabbed a fly rod and my sling pack and ventured into the marsh with a palpable sense of anticipation. I didn't even make it to where the birds were before spotting a blitz in a marsh cut where I'd not seen loads of breaking bass in years. The fish were on peanuts, averaged about 27 inches, and were ravenous and easily caught. 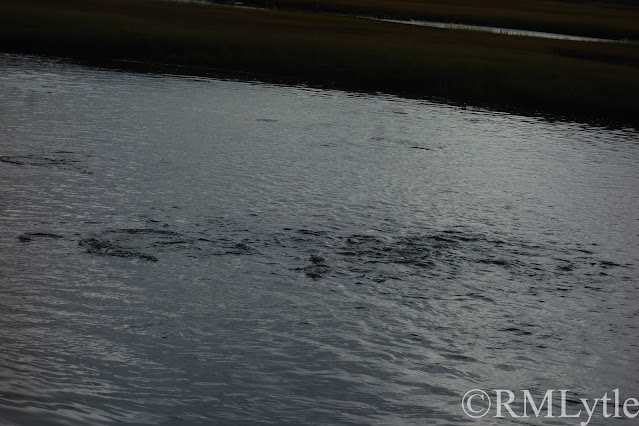 I roped in bass after bass on a white Hollow Fleye, many of them being low end slot fish and a fair number being smaller. The size of the fish and ferocity of the blitz were very similar to those of that formative year of my striped bass fishing. It felt like a homecoming of sorts. After years if lackluster results this water- one of my favorite places -was suddenly giving up the goods again. Things slowly winded down right in front of me, and in time the decision was made to go to where all those birds had been. I couldn't have anticipated just how crazy that would be. 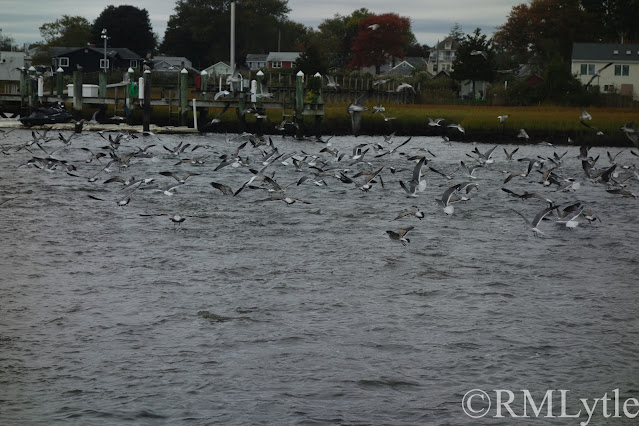 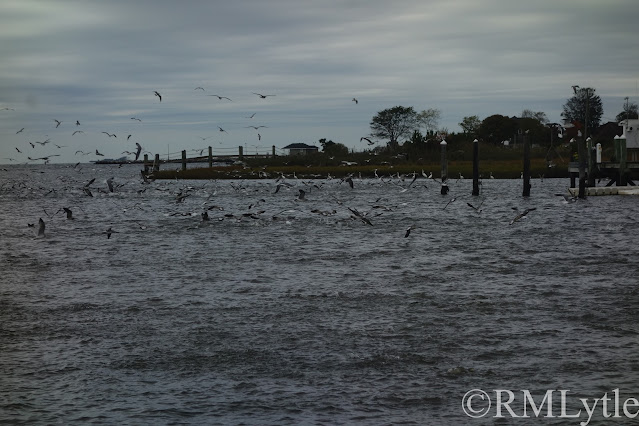 I had just walked up to the most spectacular, expansive, and prolonged blitzes I had ever encountered. There were acres of bass and hundreds of birds laying siege to peanut bunker in a narrow tidal creek. This was a show to beat all others, a display of life and death that touched every sense. The visual spectacle was, of course, plainly evident. Thousands of iridescent juvenile menhaden sprayed out of thew choppy water, often followed by a linesider going airborne in hot pursuit. The birds provided their own sights to fixate on the laughing gulls dipping to grab the peanuts, hovering low over breaking fish, wings not beating effortlessly as they often can but, rather, completely frantic. Nothing I could see in that little part of the world at that moment was calm. It was chaos. If I closed my eyes, and I did a few times, I couldn't hide from it. The sound may have actually rivaled the sights as evidence of the mayhem. The gulls calling was audible from afar of course but so was the sound of the bass. It was a dull roar, like a waterfall, with higher pitched splashes and pops coming through. I could almost feel it. At times I really could when the bass would pin a school against the mud bank at my feet, the vibrations of their many bodies impacting the sod transmitting to my feet through the very ground I stood on. There was a smell and even taste to the air the signified the death of baitfish as well. It's an almost sweet smell with some vegetable like aspects. If you've been around a wild bunker blitz, you know what I'm talking about. It's an almost melon like smell with hints of fishiness to it.

It's hard to really put into words what a blitz like that is like and what it feels like to be in the middle of all of that. It's even harder to describe what it was like for me being in such a special place with all of that going on around me. This was a meaningful day of fishing for me. Though I knew that this wasn't likely to produce any out-sized fish, that getting larger fish was no more predictable here than winning big at a slot machine, this blitz was more significant to me than so many of the big fish blitzes I'd already experienced this year. 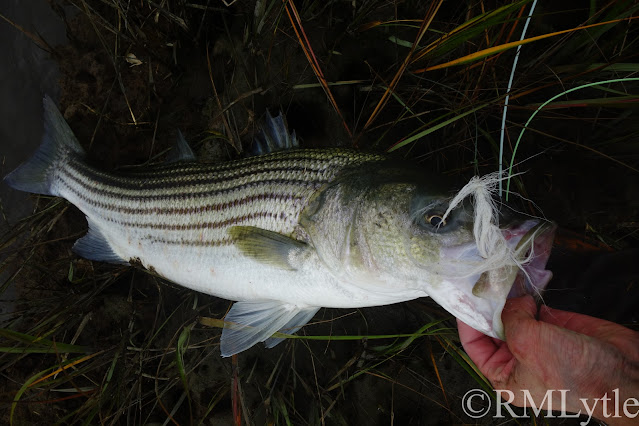 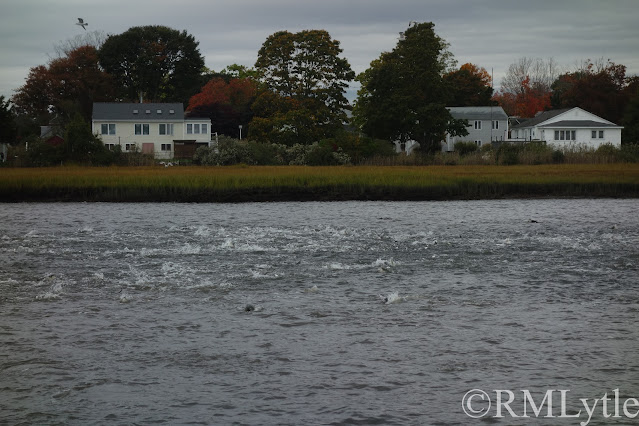 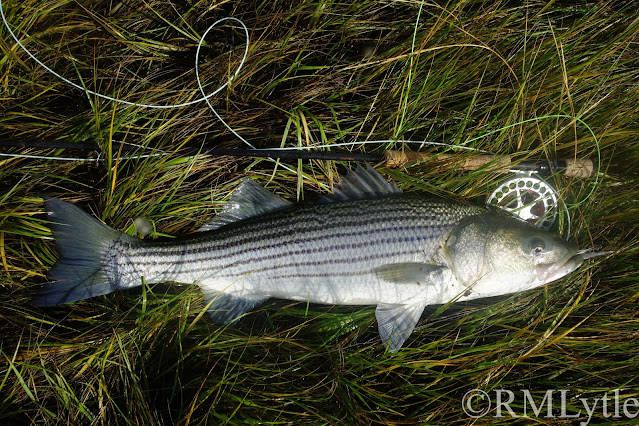 There were certainly big fish in the mix, so the chance was always there. At one point, having downsized to a kinky muddler just to diminish the damage to my larger flies, I hooked a smaller bass. It wasn't tiny, maybe 20 inches long, but much smaller than many of the fish I was catching. I was fixated on the activity around me and not really paying any mind to the fish I had on when there was a massive explosion, as if a large dog had just jumped into the creek. My rod buckled and I just barely caught sight of the flank and tail of the preposterously large striper that had just engulfed the schoolie I had on. My hook pulled free mere seconds after the attack and I'd never get to know quite how big that fish was. It'll certainly be a memory that will stick with me for the rest of my life though.
Another sight that is ingrained in memory from that day was a school of bass so thick that they filled and darkened the water column, with the fish at the very top sunning their tails and dorsal fins in dry air. This wasn't a blitz, just a school of fish so thick it occupied the entirety of the water column. I'd never seen anything like this, and maybe never will again. 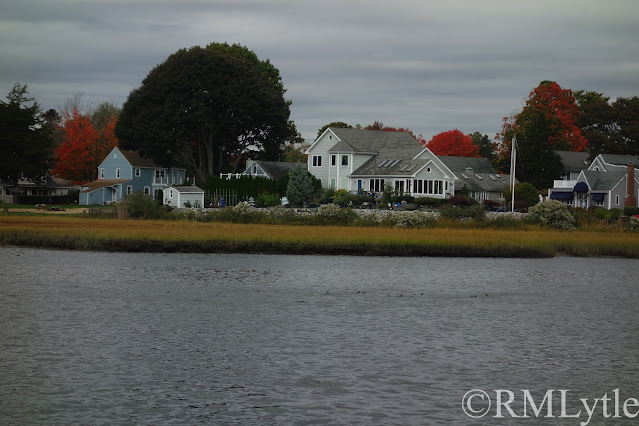 After a spell, I actually had to go back home. I left the blitz in progress. Being gone long just wasn't an option though, returning that very same day had to happen. I also felt like I needed to share this spectacular thing with some friends. I asked Garth if he wanted to come and he did. My friend Boots and I had talked about fishing that day as well, so I gave him a call. He'd actually been with me one of the last good days of that formative first season in this spot as well. These two guys would get the gravity of this, that's what was important.
Some people might think it was foolhardy to think this epic blitz would still be going on. In my mind, there was no way it wouldn't be. It was just too large, too vigorous, and had already been going on at a somewhat subpar tide... had to continue. Well... 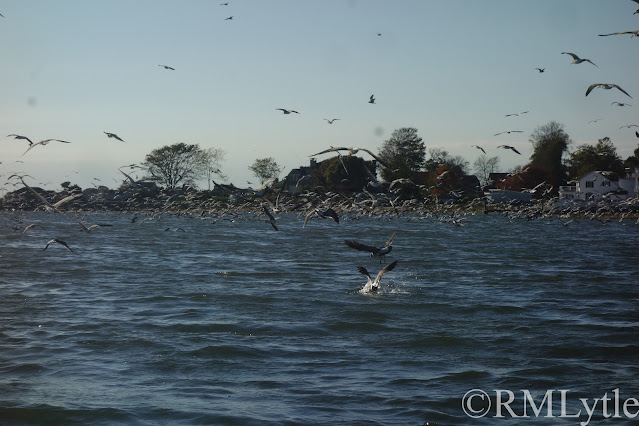 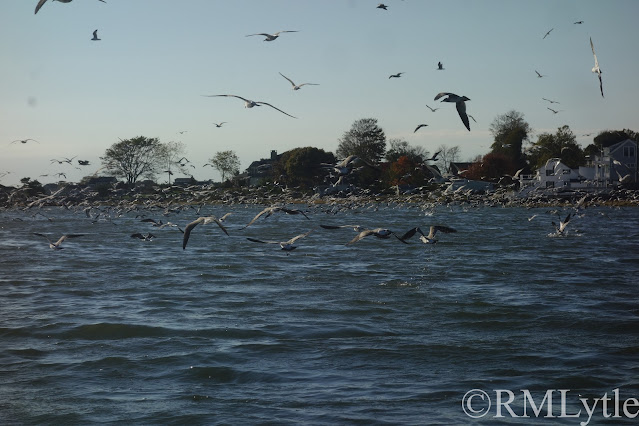 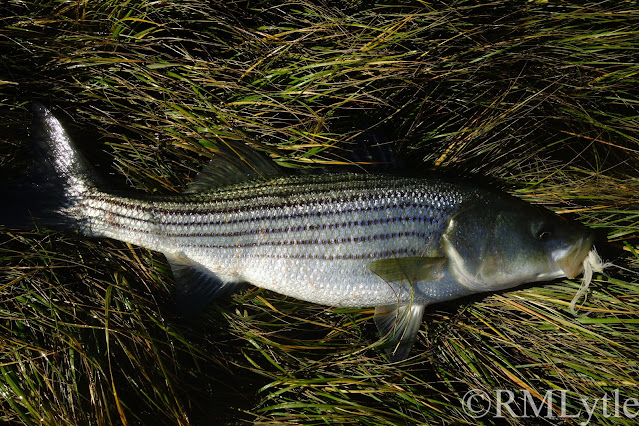 Garth and I drove down together, Boots would get there a little later. We were in the fish right away, and if anything the spectacle had increased in intensity in some ways. This event had now seemingly been in progress for six hours. It would go on for many, many more, and that was something I couldn't have anticipated. 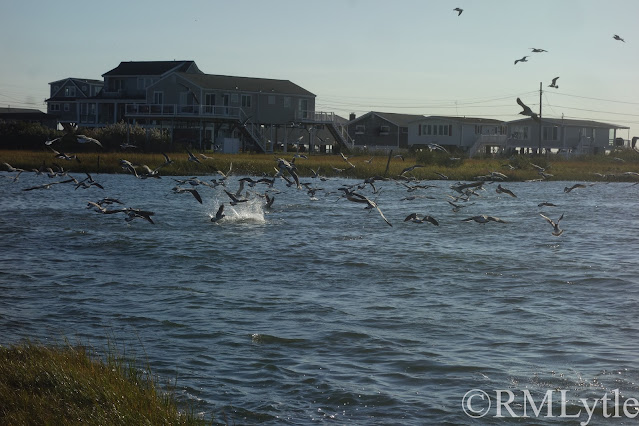 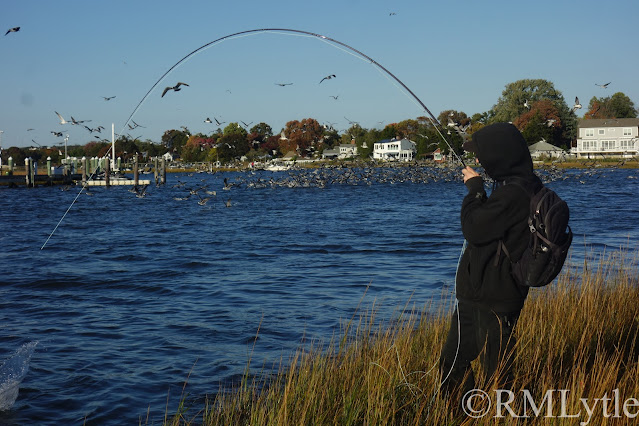 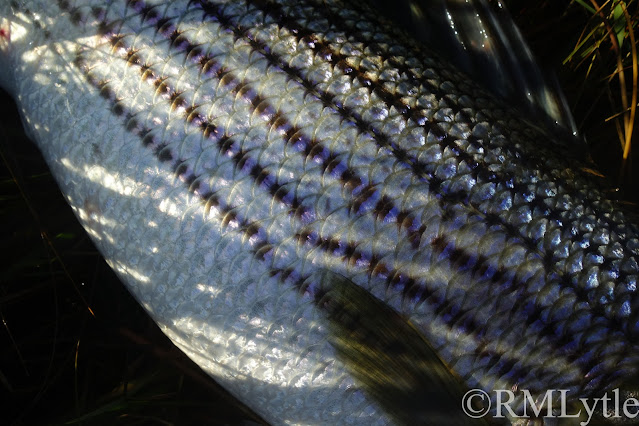 We gawked. We caught fish. We struggled to process the extraordinary event that was right in front of us. There are bigger blitzes, I've seen plenty of them. But for a blitz of this size and duration to take place in a narrow system of tidal creeks is very special. It doesn't happen every day. Boots finally found his way to us and joined in the revelry. He was soon trying to catch bass on all of the plugs he'd not yet caught stripers on, plugs that had special meaning to him. And because the fish were so ravenous it wasn't all that hard to get one to eat almost anything. 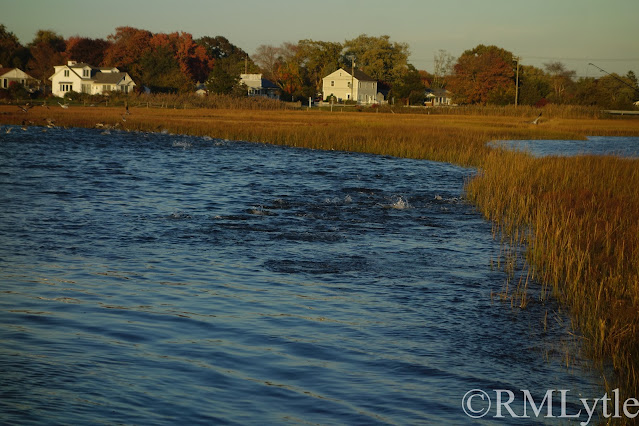 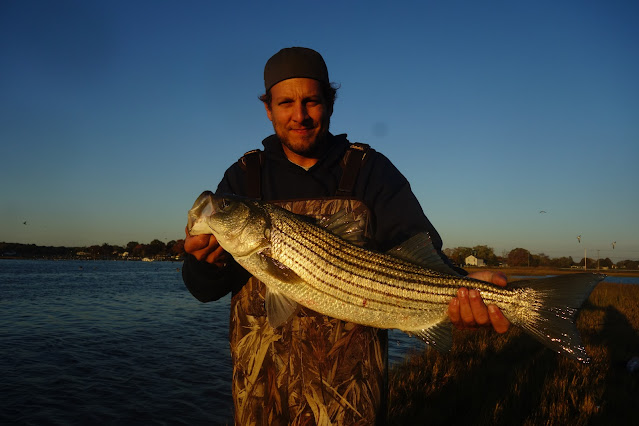 For the fish, this day represented and important and yearly part of a migration. Water temperatures were falling and the days were getting shorter. These fish were heading towards their winter homes, and their biology drove them to pack on the pounds while they could. Some of the fish we were catching were so heavy set they looked downright rotund. They had round, saggy bellies. The really small ones almost looked like tadpoles, carrying their freshly gained weight exclusively in their stomachs. As with so many aspects of the day, photos just didn't do it justice. 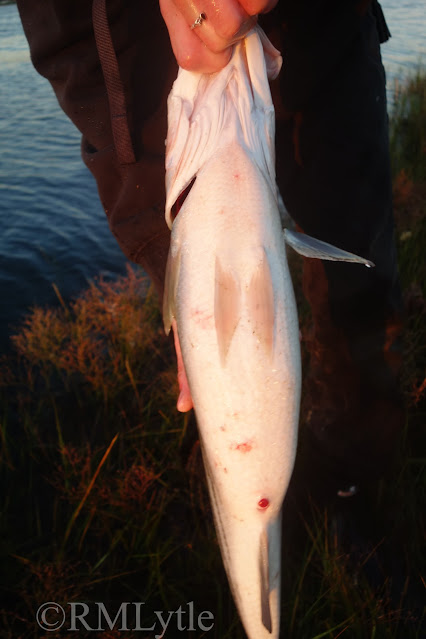 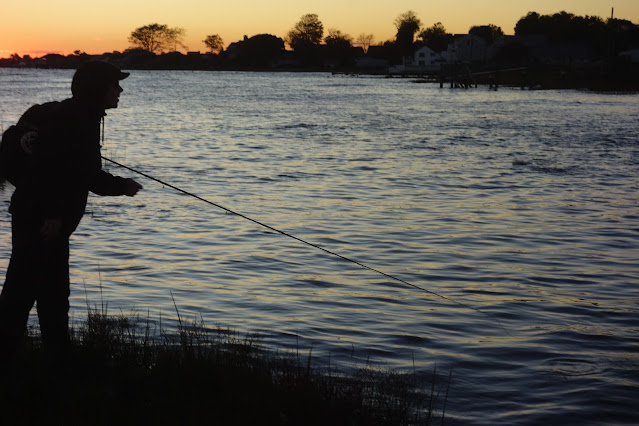 As it got darker I anticipated that this blitz would end. Nighttime blitzes are rare. Nocturnal surface feeding isn't, but concentrated blitzing is. This was the blitz that refused to end though. The sun fell and it was still going on in the fading light. 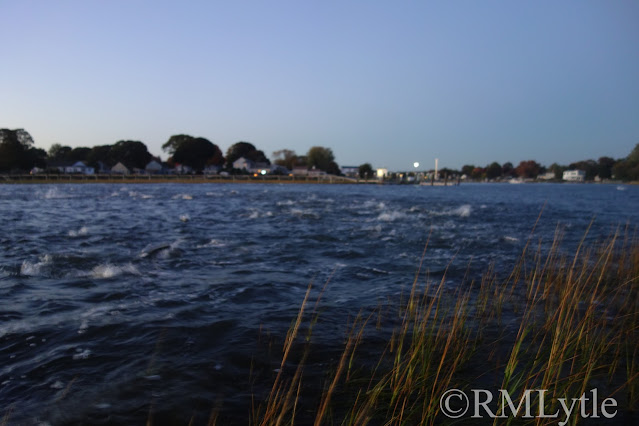 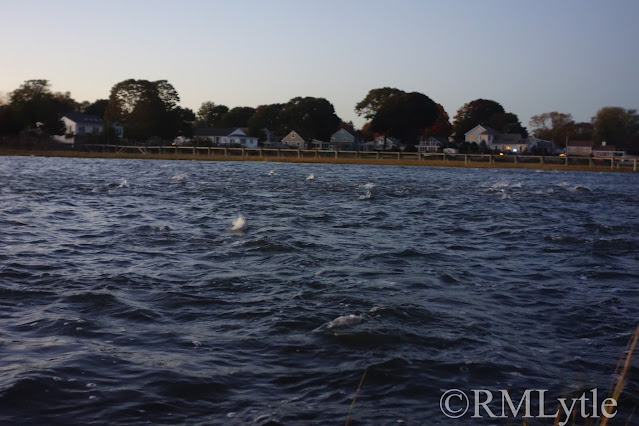 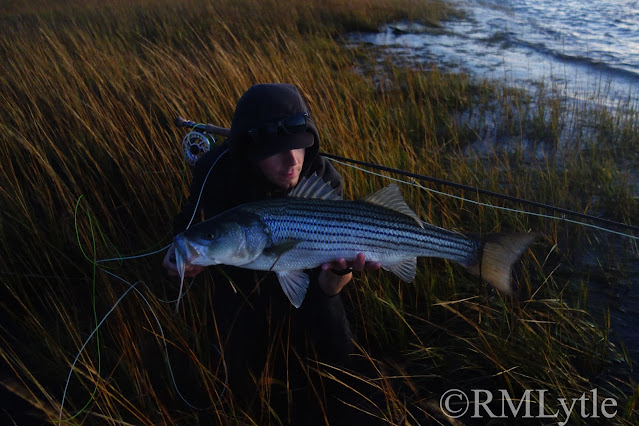 As the sky darkened, the fish merely moved rather than calming down. We followed them down to the mouth of the creek and continued to catch fish into the night, our hands becoming shredded and raw from the rasp of countless striper mouths. The number of fish to hand was likely well in the hundreds at that point, and the thought of tying into something much bigger convinced me to continue casting. That and the knowledge that this was a special event. I told Garth, "enjoy this while it lasts, because we may never experience this again. These are our good old days". I'd love to believe that I was wrong, but there's no way to guarantee that we'd experience a tidal creek blitz like this in our home waters again. So we stuck with it until it seemed absurd to stay a minute longer. My hands were bleeding, my sleeves were crusted with salt and dried bass slime, and I'd waded into the creek wearing leather boots and khakis in air temperatures that were dropping into the high 40's. When the fish put on a show that good, I don't let much stand in the way of being in the middle of it all. Sharing this show with a couple of good friends in a location that was incredibly important  to my development as an angler was priceless. 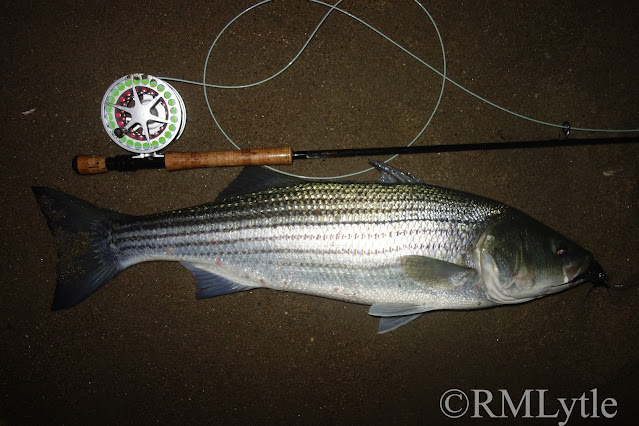 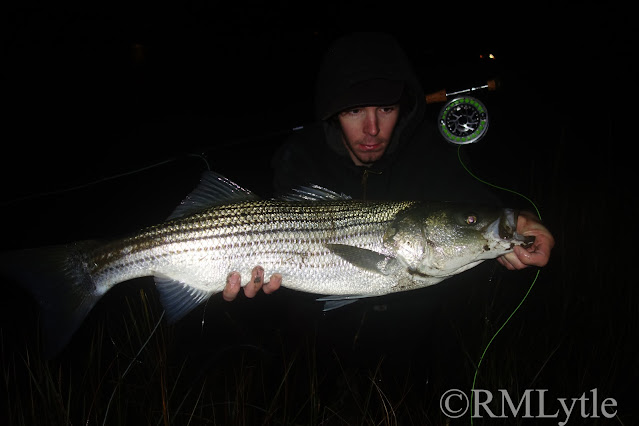 Thank you to my Patrons; Erin, David, John, Elizabeth, Brandon, Christopher, Shawn, Mike, Sara, Franky, Geof, Luke, Noah, Justin, Sean, Tom, Mark, Jake, Chris, and Oliver for making Connecticut Fly Angler possible. If you want to support this blog, look for the Patreon link at the top of the right side-bar in web version.
Posted by RM Lytle at 9:05 AM