A washboard dirt road was shaking up everything in the 4Runner as Garth and I descended the hill from our first stream of the trip. At the base of the hill, we knew there was another river. We'd crossed it on the way in the previous night and I'd examined satellite imagery of it prior to the trip. It looked marginal, but if you don't check the bridge pool on a new stream on and exploratory trout trip, can you even call yourself a trout angler? We pulled off just before the bridge and hopped out. There was an man leaning against the upstream rail, looking at the water. We looked at the downstream side, scanning the slow, mirror calm pool for signs of salmonids, and patiently waited for the man to continue on his morning walk. We just didn't want to encroach. When he left, Garth took his place on the upstream side. "Oh", he said, having spotted what the gentleman had been looking at. There was a school of brook trout there, maybe 20 strong, some of them quite substantial. These couldn't possibly be wild fish, but when presented the opportunity to sight fish anything I take that opportunity. At very least they'd been in the river for a while and would be very selective in the slow pool.

Knowing they'd not be visible from the position we'd have to cast from and that accurate casts would be necessary, we decided to tag team sight fish for them. We'd take turns, one of us would make the casts while the other stood on the bridge and called out the shots. This is a very fun way to fish and can be a fantastic learning experience. We rigged up a long, light leader with a small dry initially. My recollection of what that fly was is a little fuzzy, I believe it was a tiny nameless emerger pattern. Garth was at bat first. I positioned on the bridge while he waded slowly and quietly into place. It took a short time to dial the operation in, but he soon landed the fly over the fish and I watched one peel out and rise to the fly. 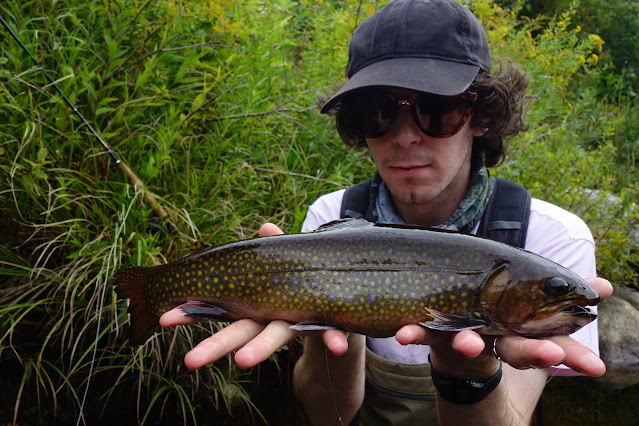 We each managed a fish on the dry, but had other plans in mind. We opted to move on but return later in the trip if we didn't get distracted by something interesting somewhere else.
A couple days later, there we were on that bridge again looking at that school of brook trout. This time they were un-inclined to rise, so we'd fish small and lightly weighted nymphs. I was exited. Though these were merely hatchery raised trout, one of my favorite sorts of fishing is fishing small nymphs or wet flies to salmonids in nearly still water. It s a game of long leaders, careful stalking, and diligent observation. There's no room for carelessness, lest the angler want to spook fish and cast to dead water all day. It is best played by sight, whether tag teaming as Garth and I were or independently when conditions allow, or with intimate knowledge of the water you're fishing. Whether its a lake, pond, or big flat on a river, there are places the trout will be and places they won't. This style of fishing grew on me first when fishing the East Branch of the Delaware, where brown trout dwelling in long flats feed on tiny mayfly nymphs blend in so well in the cobbled, multi-colored bottom that I would lose track of them even if they didn't move just by glancing away for a second. It progressed to Maine, where I approached weed edges and spring holes in a pond where trophy wild brook roamed in search of damselfly nymphs and could be caught with long, delicate casts and traditional wetflies. Then at home in Connecticut, when I found that trout rising in the slowest pools on misty summer mornings could be deceived better with minuscule pheasant tail nymphs than with any dry fly in my boxes. These scenarios all require similar presentations, and we'd be employing them on these brook trout in Vermont.
Of course these char would be quite a bit more forgiving than a lot of those mentioned in the scenarios. We'd use a slightly shorter leader than I often would, somewhat larger flies, and they'd likely give us more opportunities. Whereas pulling one large wild brown out might spook and entire tightly packed pod sometimes, we could almost certainly get quite a few of these stocker brookies before the school got too nervous.
We set about the process. I got up on the bridge while Garth got into position. I called out the location of fish, Garth made the most accurate cast he could, then I announced what the fish did, suggested presentation changes, and called out when a fish ate. Then we switched. This fish were indeed pretty easy. It didn't take all that much to draw them and it took much more to put the school down. We periodically rested them, remained delicate in our approaches, and Picked off fish after fish. There weren't any particularly big takeaways from fly selection, presentation, or anything else like that for you all to learn from. Those stocker brookies just weren't picky enough for that. What I took away and want to impart on you fellow anglers regards to setting the hook. Regardless of what the guy on the bridge said about the fish taking, the angler casting had to be patient with the hook set. The set itself was nothing special, a pointed but gentle lift. It was all about timing. I noted that no matter what Garth  said, If I waited a moment after he said I had a take, oftentimes until I felt the fish, I got a good hook set. If I set the moment he said I had a take I usually missed. This isn't really a surprise but it is a clear-cut example. Trout don't always spit a fly in an instant, I'd even go so far as to say they don't often do so, and giving the fish time to turn results in more fish to net. 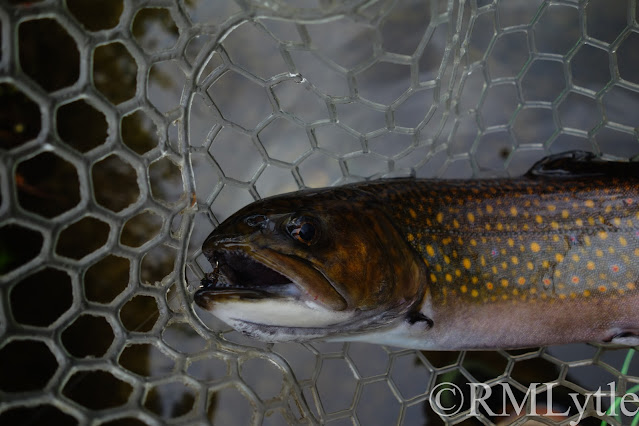 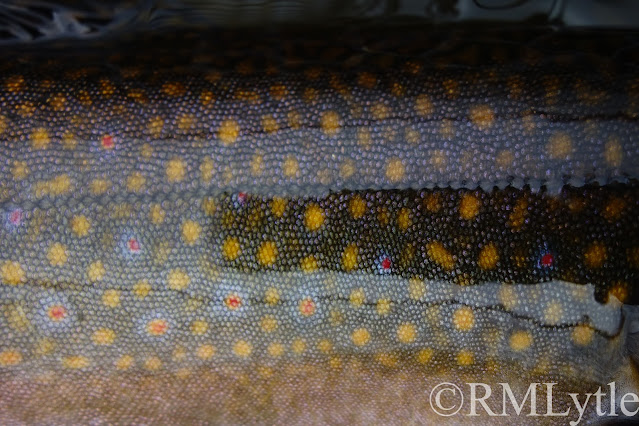 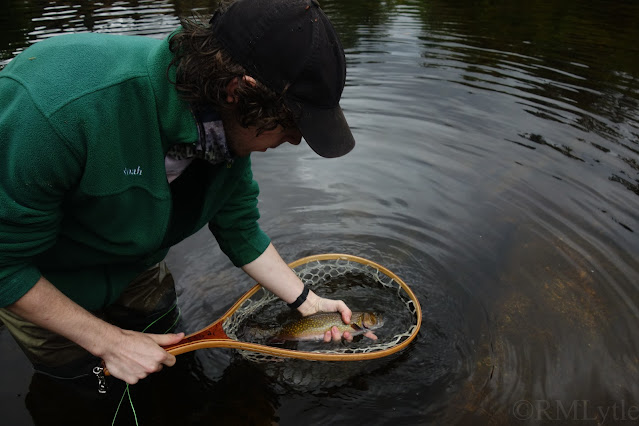 There were a few really big males mixed in with this school and obviously we wanted to catch one of those. I like to say, if I'm going to fish for fake trout that were raised in a concrete tank, they may as well at least be big. It came to a point of intentionally missing and pulling away from smaller fish, which were consistently getting to the fly first. One of the fatter males did make it to net, though it was still dwarfed by a couple of the fish in the school. 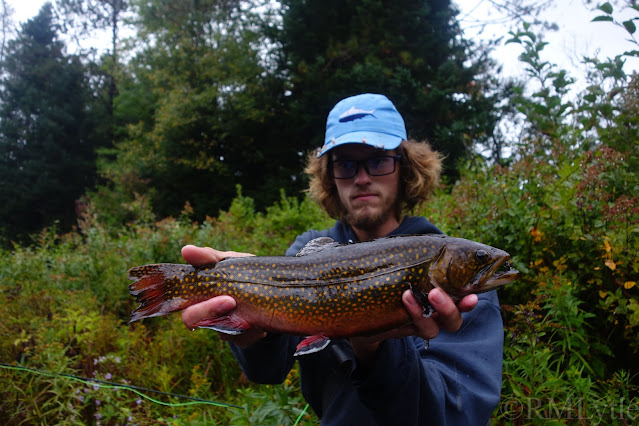 Garth and I each ended up having goes at one of the largest fish. He missed a take from one of the giants. I ended up loosing one. It was frankly one of the heftier brook trout I've ever hooked, taking off on an exceptional run of the bat and putting a deep bend in the 5wt. The size 18 pheasant tail while rolling on the surface well downstream of where it had taken the fly.
One of the things this trip was doing, quite unintentionally, was reminding me that I enjoy warm season daytime trout fishing. In recent years, I've been reserving it for the late fall, winter, and spring. In the warmer months I've pretty much just fished at night in recent years. CT's summer fisheries, with the exception of the Farmington (which I just don't enjoy anymore) and some small stream (which I don't like putting pressure on with frequent summer visits). There are also just plenty of other things to do close to home, things I often like more. For the last couple years, it's been carp. It can be hard for those of us who like to fly fish for any and every fish in all kinds of water to pick what to do. Here in the northeast there are an awful lot of options. Perhaps next season trout will be on the agenda for me a little bit more often. Though I tend to shirk the way many fly anglers hold salmonids up as the supreme fish to target, I devoted quite a few years to hard focused trout fishing for a reason. I know a lot more than I did then, and I'd like to improve my game a bit more.
We shall see; come next summer the pull of double digit bowfin might be a impossible to resist.
Thank you to my Patrons; Erin, David, John, Elizabeth, Brandon, Christopher, Shawn, Mike, Sara, Franky, Geof, Luke, Noah, Justin, Sean, Tom, Mark, Jake, Chris, and Oliver for making Connecticut Fly Angler possible. If you want to support this blog, look for the Patreon link at the top of the right side-bar in web version.
Posted by RM Lytle at 8:23 AM