Noah and I headed out under dreary skies one November hoping to find some big striper blitzes. Some had been happening in the days before, and indeed that very morning in a different area. It had rained a lot the before, though, and that often puts striped bass into a lethargic mood sends the bait packing. We were still hopeful that a large biomass of stripers would be around, especially since there had been tremendous numbers in the days prior. Our first drift on a key mud flat produced a 28" bass for me, and multiple boils and hits for both of us including with some particularly good fish. That made me very hopeful. Subsequent drifts came up empty. 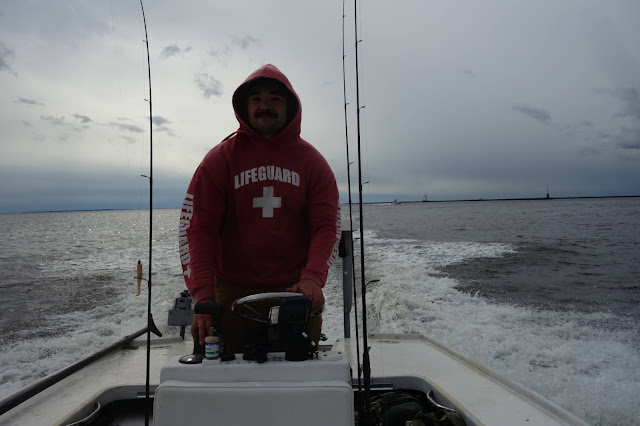 After a few runs through water that should have been but wasn't giving up fish, we made our way into some backwaters to looks for what would likely be smaller but more willing fish. We set up at a choke point where lots of hickory shad were rolling. I picked up Noah's light setup while he continued to throw bigger plastics for stripers. At first I just used the jig he had tied on, then I switched out and actually tied a Clouser on. Noah had figured out that a lot of treamers that i'd left lying around his van  were perfectly cast-able on his light setups. I was interested to mess around with it in a situation where it would be particularly conducive. I also wanted to see if I'd have any interest in buying such a setup for clients who aren't interested in fly fishing, as ultralight tackle has a lot of crossover with fly gear and I'd like not to limit myself in terms of clientele. I caught a load of shad on both his jig and my Clouser, and they were a lot of fun on a light spinning rod.
Something then made me switch back to the fly rod though: a fish Noah caught, a fish he and I have been after together for years. Our mortal enemy, our biggest foe. Our most difficult adversary. A large brackish-water white perch.
It took a big plastic, which just seemed ridiculous. The fish was 13.5" long and very hefty, a truly impressive specimen, and of course I immediately wanted to try to catch one of those. 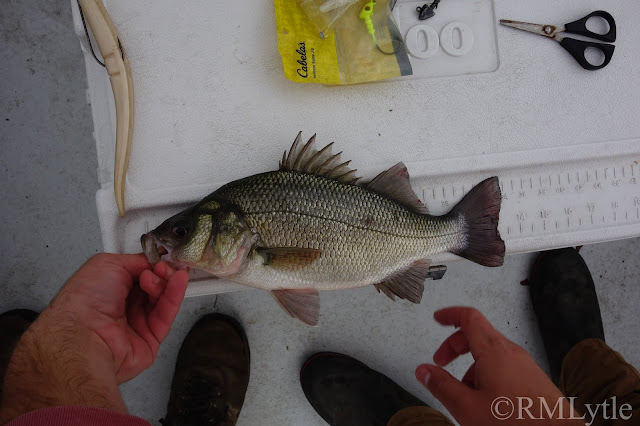 I didn't. Noah didn't get another either. We ended that portion of the trip having had both Morone species present in CT on the boat though, and I certainly haven't experienced that before. Noah hadn't in a long time. It was pretty cool.

Fish for the love of fish.
Fish for the love of places fish live.
Fish for you.
And stay safe and healthy.
Thank you to my Patrons; Erin, David, John, Elizabeth, Brandon, Christopher, Shawn, Mike, Sara, Leo, C, Franky, Geof, Luke, Streamer Swinger, and Noah for making Connecticut Fly Angler possible. If you want to support this blog, look for the Patreon link at the top of the right side-bar in web version.
Posted by RM Lytle at 8:28 AM