On an exceptionally dreary October day, my schedule lined up with my good friend Mark Alpert's and we were able to get out on the water after fall run striped bass. It was choppy and grey out there, exactly the sort of weather that gets stripers chowing. I was subsequently a bit surprised then, by the general lack of activity initially. We covered some territory that I'd been having good luck on during the week or two prior without seeing enough life to feel confident. We then did find a little blitz going. It wasn't anything spectacular but it at least got the skunk off the boat with a few very small schoolies and hickory shad.

After that, we found what we'd been missing. A few birds and boil initially keyed us into the productive water, but we didn't need to chase small blitzes. There were fish all over, a super-school. Every cast for some very long drifts got some sort of reaction. The first fish was a beautiful 34 incher, to be followed by a lot more fish from the 2015 and 2014 year classes with some younger ones mixed in. There's currently quite a few slot-sized bass in the biomass, which is nice as these fish aren't yet so big that they're less inclined to spend lots of time in the shallows and are perfect fly rod fish, but it is unfortunate to know that this won't last. These are the size fish that get hammered by party boats and there are very few bass that will be attaining slot size in the coming years. I'm trying as much as possible to enjoy them while we've got them though. 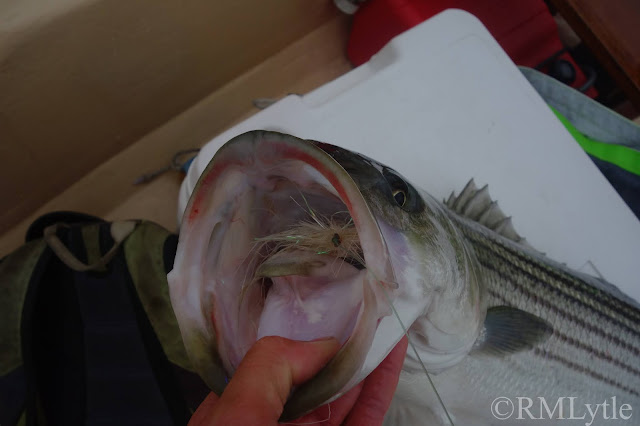 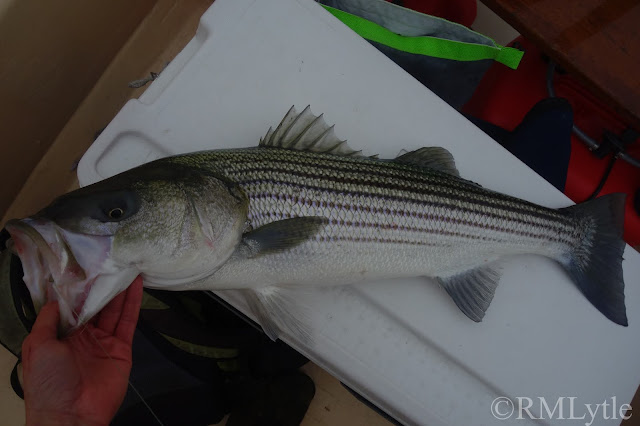 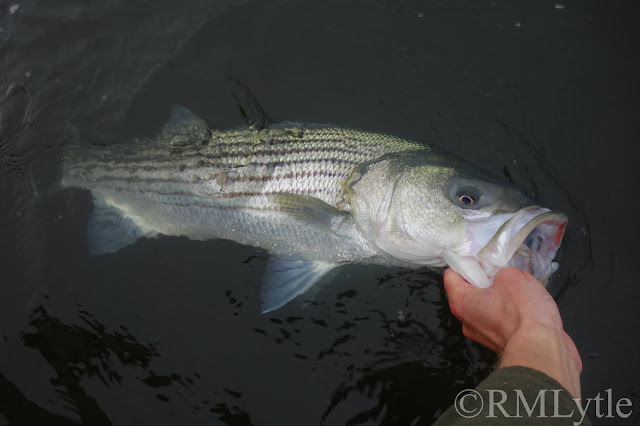 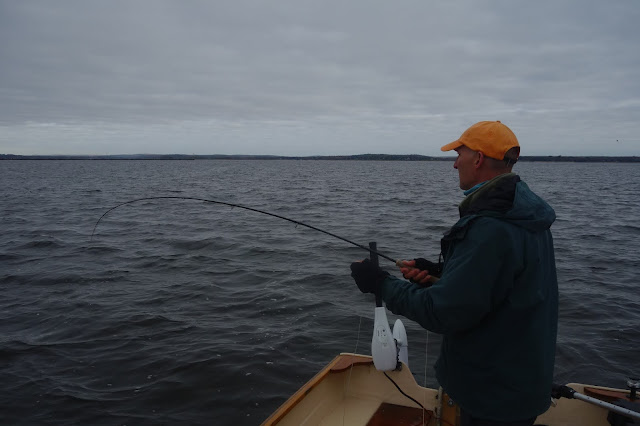 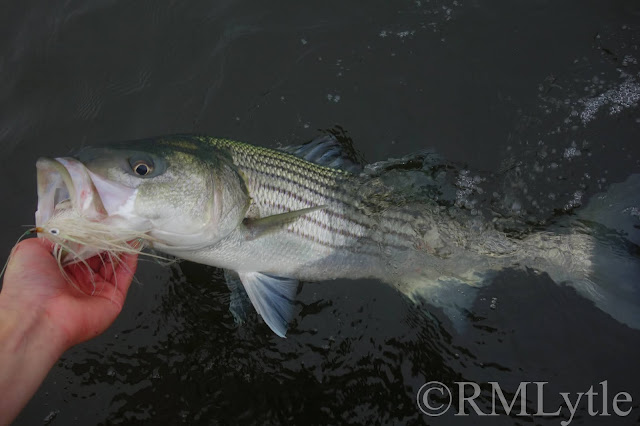 I've far more confidence in large, white action flies than I do accurate imitations for most bass blitz fishing. There are plenty of circumstances that call for matching the forage, but there's also a lot to be said for a big, obvious, visible fly that darts and weaves. If it results in a lot fewer eats and commitments or notably larger fish moved, it isn't worth it. Otherwise, it's always go big or go home for me. Bad weather with chop, stained water, and dark sky is the perfect scenario for this mentality. Add to that an over abundance of targets and the stage is set for very exciting, big-fly fishing; soon we were totally surrounded by blitzing bass, feeding on both adult and juvenile menhaden. It was an incredible scene and between pulling on fish, I took a few moments to bask in the mayhem. We were catching plenty of fish, my arms would be spent by the end of the day from pulling on bass. I'd have missed out on more by continuing fishing than I did by looking up and just enjoying the show now and then. 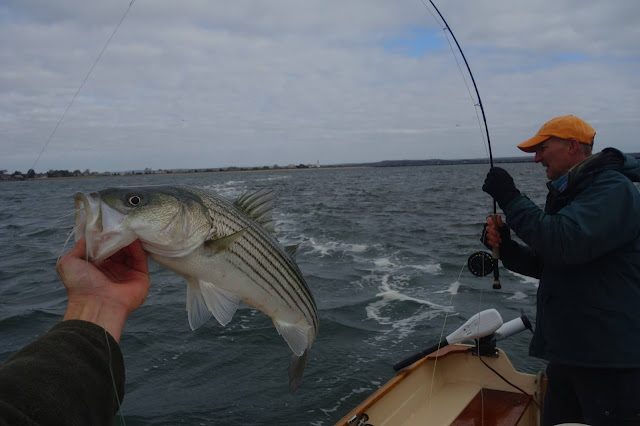 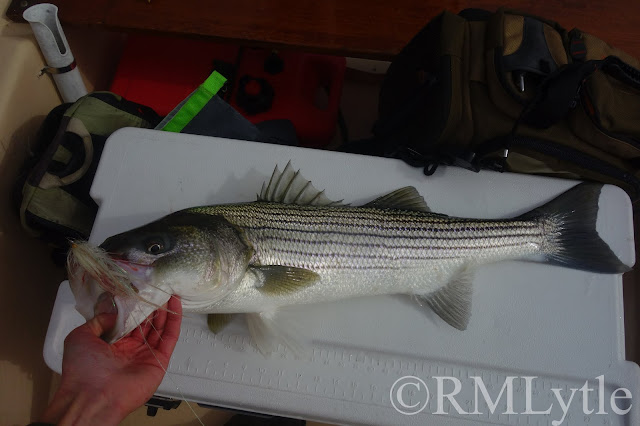 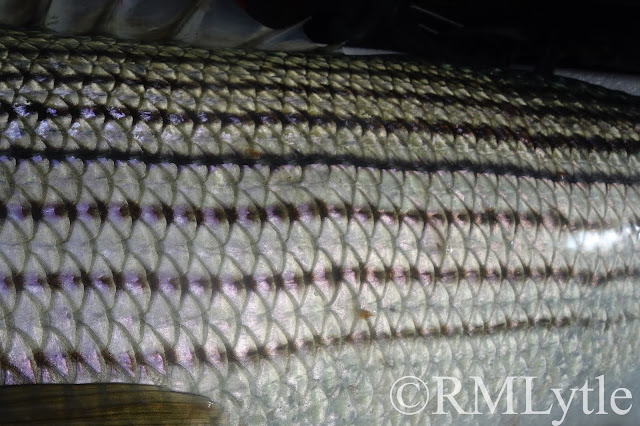 Fish weren't in one area, or even holding to specific structure a lot of the time. There seemed to be bass just about everywhere we looked and everywhere we cast for a big chunk of the day. They weren't always blitzing. Only small adjustments were needed in order to stay on the fish.We had a couple small lulls, but for the most part if we kept casting we kept getting takes. 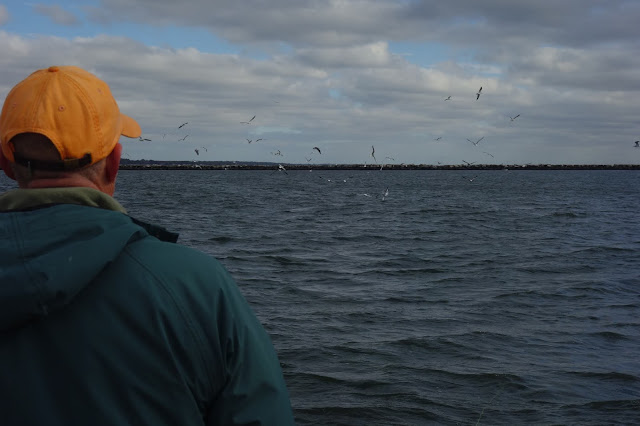 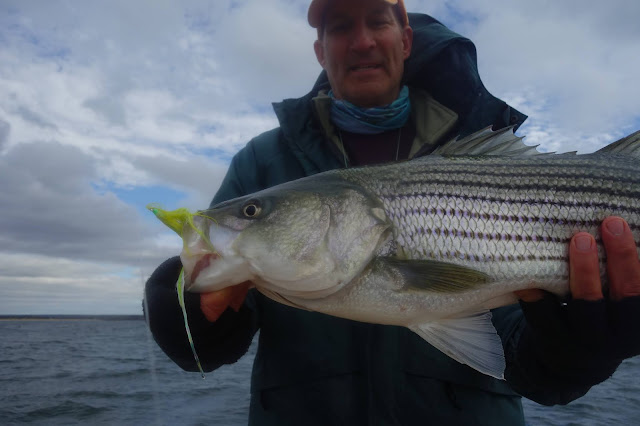 We even slowly attempted to move back towards the launch, content with our success, but kept getting distracted by big blitzes. There were a great many "last casts" made that day. The fish just kept our attention for hours. It was awesome.
The fish bellow, a 29 incher, had a littoral society tag. Unfortunately, the tag was thickly covered in algae and after momentarily attempting to rub off the algae, I decided it wasn't worth taking the time to do so; it would clearly have required me keep the fish out of the water for much too long to clean the tag and take down the information. That's the first tagged bass I've caught. I once cast at a quite large striper with a visible tag while flats fishing, though. 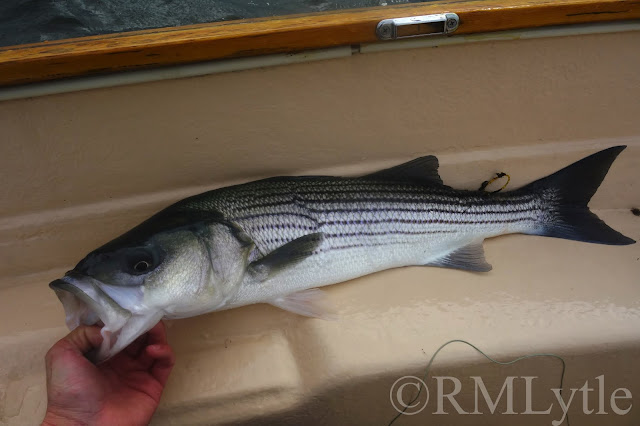 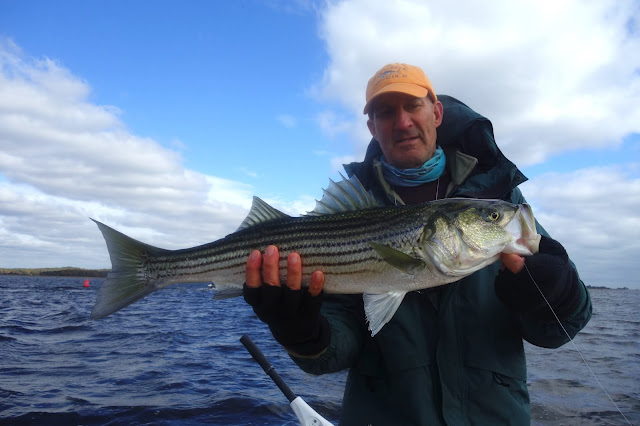 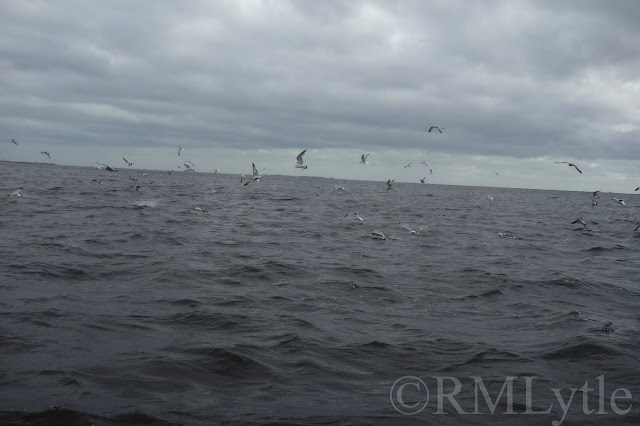 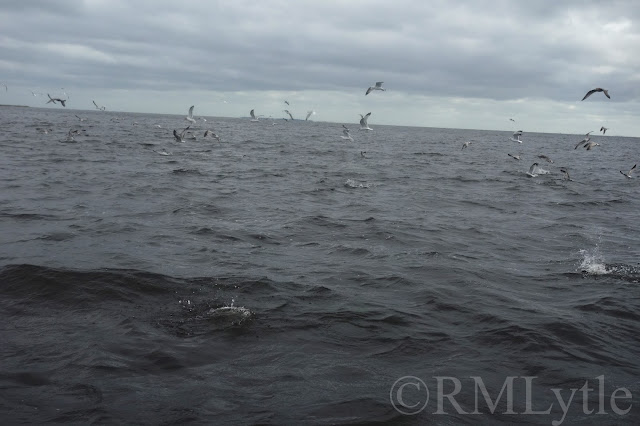 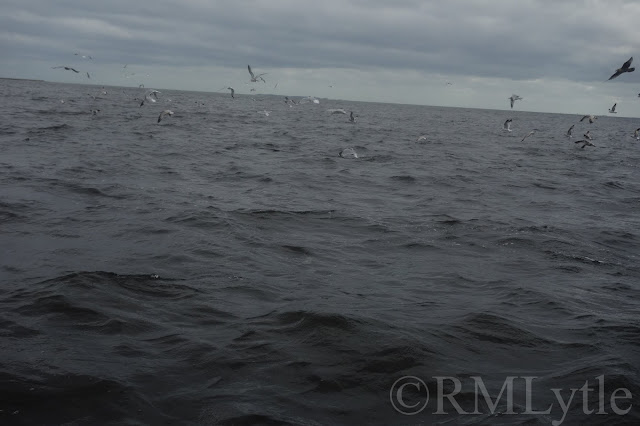 Eventually Mark and I were able to peal ourselves away. We didn't really need to catch any more fish anyway. We had a boat total that certainly exceeded 75, with a bunch of nice sized ones in the mix. We didn't get any true cows, but it is very hard to complain about a day like that. 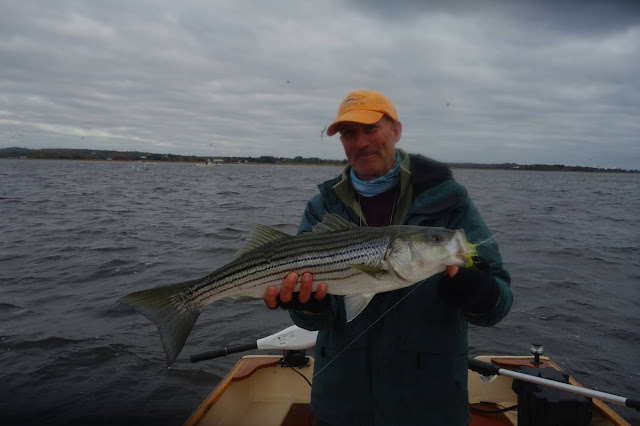 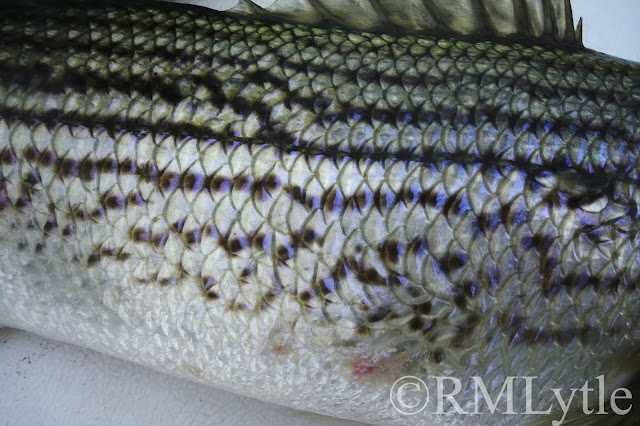 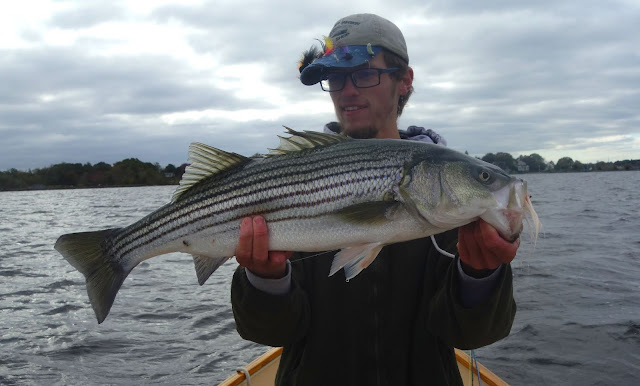 November is now almost over and the year itself, as well. This has been my best striped bass year. As of today I've caught 48 bass over 28 inches on the fly this season, with two shore-caught 40 inch class fish and my personal best and first 40 pound class fish on the fly. I could still get another 40 incher this season, but while the year comes to an end it's important for those of us who had a good season to reflect on what that means for the stock as a whole.
It means very little.
The stock is still in a bad way. There are numerous very poor year classes. The Chesapeake Bay is still incredibly polluted. There is still rampant poaching. There is still an awful lot to be done, so don't get complacent.

Fish for the love of fish.
Fish for the love of places fish live.
Fish for you.
And stay safe and healthy.
Thank you to my Patrons; Erin, David, John, Elizabeth, Brandon, Christopher, Shawn, Mike, Sara, Leo, C, Franky, Geof, Luke, Streamer Swinger, and Noah for making Connecticut Fly Angler possible. If you want to support this blog, look for the Patreon link at the top of the right side-bar in web version.
Edited By Cheyenne Terrien
Posted by RM Lytle at 7:42 PM