November 12th was one of those horribly unpleasant weather days to fish in, featuring high wind and very heavy rain over most of Connecticut and Rhode Island. It was at least vaguely warm though, and it was the sort of weather that gets predatory fish fired up. Subsequently, I was going to fish. I didn't want to fish for very long or far from my partner's apartment, so I drove less than five minutes away to a spot that I knew had potential but hadn't fished before. I didn't really know what to expect but it was exactly the sort of spot fish will stack up at in late fall during high water: a big slack water with reasonable depth, just off the main river. Most of the food chain utilizes these spots, from macroinvertebrates, to small shiners and dace, to panfish, bass and larger predator fish.

The water was high and cold; I struggled a lot last season to get fish in this same river around this time of year. I'd not yet dialed in many areas though, and I'm still doing a lot of exploring and learning here. It was a crap-shoot, this spot, and though it appeared textbook, I wasn't sure I'd catch anything. I started out simple, hopping very small jig streamers along the bottom. This served two purposes. Flies like this catch everything from suckers and panfish to trout and bass, so it would give me a good idea off what was present (if anything). It also served as a way to feel out the bottom contours and find snags or hidden structure. That inevitably meant flies were lost, but that's just part of the game. I did start picking up fish. First, some pretty yellow perch. Nothing huge but nice to see and great to get the skunk off with. Then, a few good bluegills, and a roughly 2 pound smallmouth that I lost. That stung a little as larger smallmouth are pretty rare in this river and that was the largest I'd hooked here.

I eventually decided to tie on a larger streamer, namely a conehead Marabou Muddler, and try to tempt a larger predator. This did not go the way I expected it to when, merely three casts later, the fly was smashed to rod lengths from me by a northern pike, and not a small one either. I didn't know there were even pike in the watershed so I was taken completely by surprise. I hooked it, but immediately was sure I'd lose the fish. I was using 10lb tippet and I'd seen the take; there seemed little hope my fly was pinned at the tip of the snout or somewhere else that would make a landing possible. I felt a bite-off was inevitable. Miraculously that never happened. I actually landed the fish. I was giddy. I hadn't targeted pike much at all this season, and with the exception of the one lone big one I got early in the season, hadn't encountered many of this species in 2021. To get one five minutes from the apartment in a watershed I didn't know had them during just atrocious weather was awesome- let alone on a 5wt and 10lb tippet. The fish was snub-nosed, which was a big factor in why I was able to land it. It was very healthy in terms of bulk and energy though. 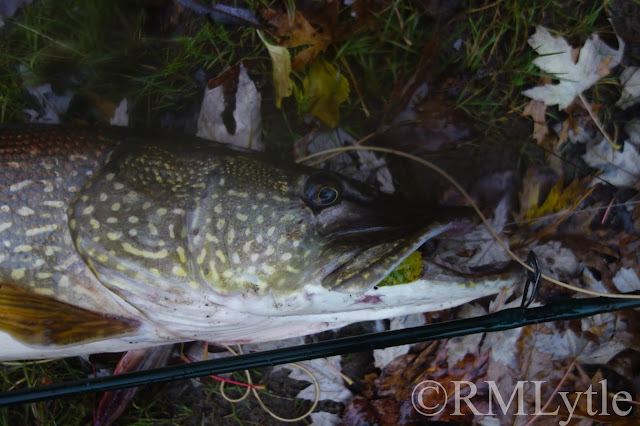 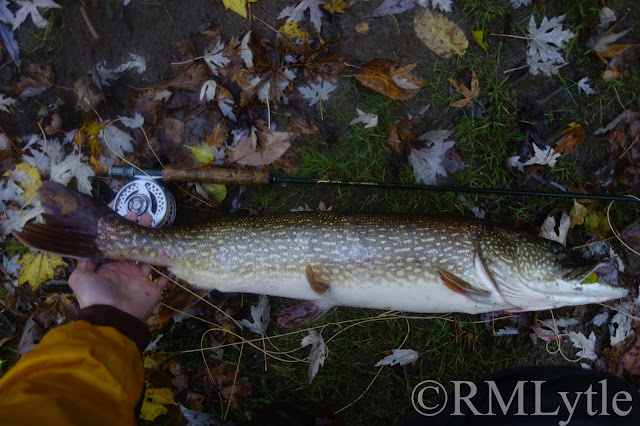 I stuck it out for a little while longer with only a few more perch, but I was sure the fight with the pike had disturbed the spot a lot. I left soaked to the bone and happy as can be, with a new task to latch onto- find even more pike in Rhode Island. Up until then I'd only heard about one body of water within the state that had any. Since then I've done quite a bit of research and scouting though and have half a mind to put in a solid effort to dial in some bites over here. It's funny how much one fish can change your mindset sometimes. 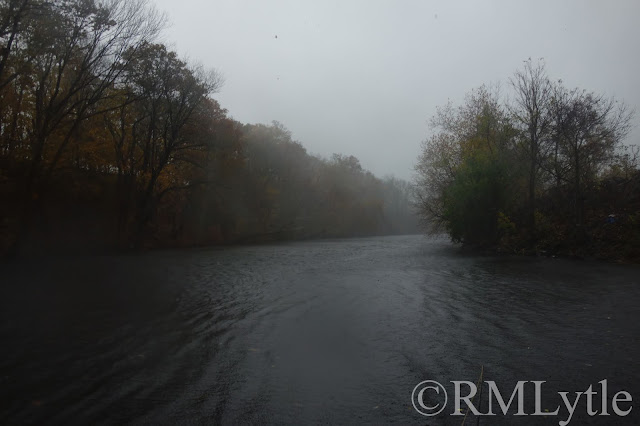 Fish for the love of fish.
Fish for the love of places fish live.
Fish for you.
And stay safe and healthy.
Thank you to my Patrons; Erin, David, John, Elizabeth, Brandon, Christopher, Shawn, Mike, Sara, Leo, C, Franky, Geof, Luke, Streamer Swinger, and Noah for making Connecticut Fly Angler possible. If you want to support this blog, look for the Patreon link at the top of the right side-bar in web version.
Edited By Cheyenne Terrien
Posted by RM Lytle at 2:31 AM