Back around the holidays, I was able to make a bit of time to get out on the water with my good friend Joe. Boots and I hadn't gotten on the water together since July so it had been a long time coming. It was to be a simple morning fishing local trout water in relatively mild though damp winter weather, both an enjoyable setup and the sort that has the fish a bit active. The water was a bit low for the time of year and the fish were spread out a bit, meaning we'd have a slow pick rather than finding fish piled up in typical wintering holes and laying the hammer on them.

Most of the fish were typically sized stockie rainbows, but I was aware that there were some large browns in one of the short stretches we fished. I saw one, actually, just a short time after we arrived. Then a bit later I found two more milling around with each other. We both took shots at the fish, and I was shocked neither ate one of Joe's worms. Eventually I laid a drift past the smaller of the two with a Walt's Worm under an indicator and saw the tell-tale white mouth flash. I set the hook and the fish angrily dropped out of its lie shaking its head. The other one decided to follow. For much of the fight, the two fish were almost glued to each other. I tried to get Joe to cast at the follower but he insisted I land my fish first. I really hoped he'd hook one of these big yellow monstrosities as well, but I also respected that he didn't want to mess up the chances of me landing mine. There's a lot to be said of a fishing buddy that will forgo a shot to make sure you land the fish you've got on. 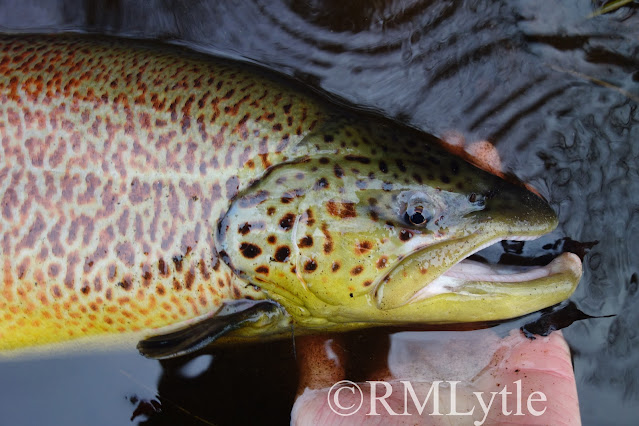 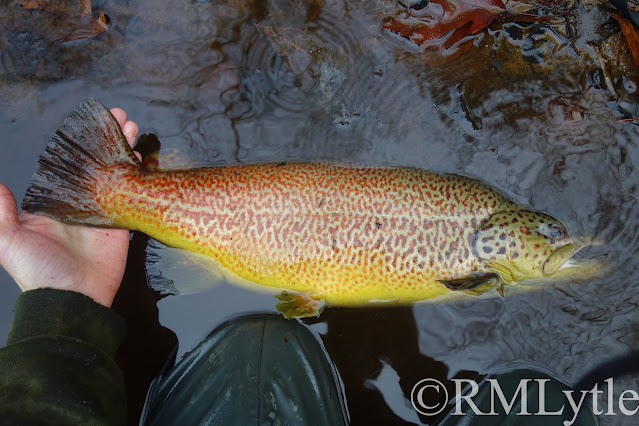 This big broodstock Cortland strain brown was vibrant but very domestic looking- shaped like the schedule fed animal it was. Both Cortlands and Romes, which were originally produced in hatcheries in NY then brought to CT, often have the almost marbled pattern that this male did, and I regularly see them mistaken for tiger trout which they most certainly are not. Male seeforellens produced in CT hatcheries regularly have this patterning too, though less extreme. Frankly the domestication seems to be to some extent accentuating this trait, as I've seen it in wild trout but never even close to this extreme. I could imagine some koi-like genetic art being done with brown trout. That might be pretty cool, though I'd rather not catch them in rivers and lakes that have wild native fish.
We tried for awhile to find and tempt the other Cortlands, and I had two follows with a streamer by another one, but it wasn't to be. We spent the rest of out time talking about life and fishing and landing the odd rainbow here and there. It was an enjoyable, relaxed, pressure free morning on the water, something I always need to balance out the intensely focused trips.

Fish for the love of fish.
Fish for the love of places fish live.
Fish for you.
And stay safe and healthy.
Thank you to my Patrons; Erin, David, John, Elizabeth, Brandon, Christopher, Shawn, Mike, Sara, Leo, C, Franky, Geof, Luke, Streamer Swinger, and Noah for making Connecticut Fly Angler possible. If you want to support this blog, look for the Patreon link at the top of the right side-bar in web version.
Posted by RM Lytle at 5:32 AM