Ending A Year With Trophy Pickerel

Noah and I were out looking for big ridiculous trout on the last day of 2021. It was grey and warm, ideal conditions for just about all of the fishing I do between November and February. But it was especially ideal for pickerel. Even though that wasn't what we were targeting, that ended up being what made the day.

Noah struck first, with a very nice though not especially large one. I then moved along to where I'd seen a very large brown trout roll and quickly picked up the nicest pickerel I'd caught all year. It smashed a white Drunk & Disorderly. 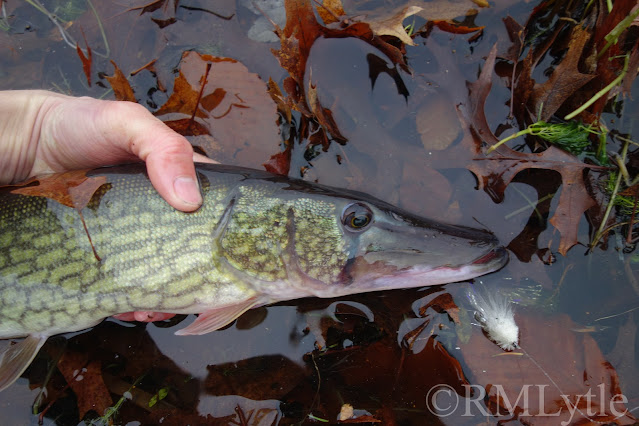 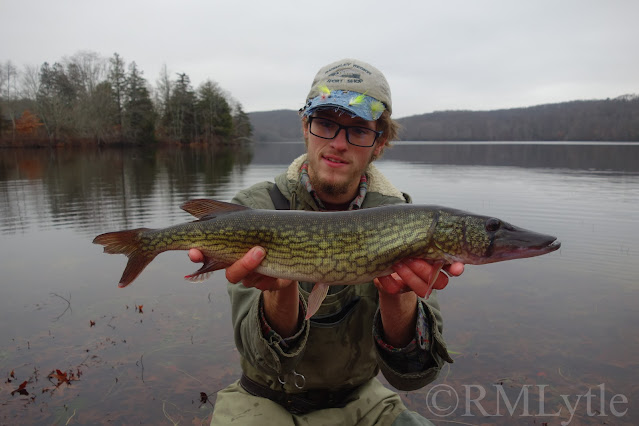 I'd moved away from fishing the D&D for a while, knowing full well how fishy that fly is and leaning on experimenting with other patterns. I find I'm gravitating back to it again in the same way that I'm gravitating back to game changers after a couple years of using them infrequently. This isn't uncommon in my fly tying and fishing. I often lean very heavily on one pattern or style for a while, using it for everything I can think of. Then I let it fall out of use for a spell before bringing it back for whatever it originally proved most effective. Right now I'm on the first stage of this progression; not with a specific pattern but with a technique for giving streamers with a deerhair head even more interesting action with a specific weight distribution. I'll elaborate more on this in the near future.
Anyway, the Drunk & Disorderly proved it's worth in pickerel ponds when just a half hour later it turned another big slime dart's head. This one, though thinner, was even longer than the first. 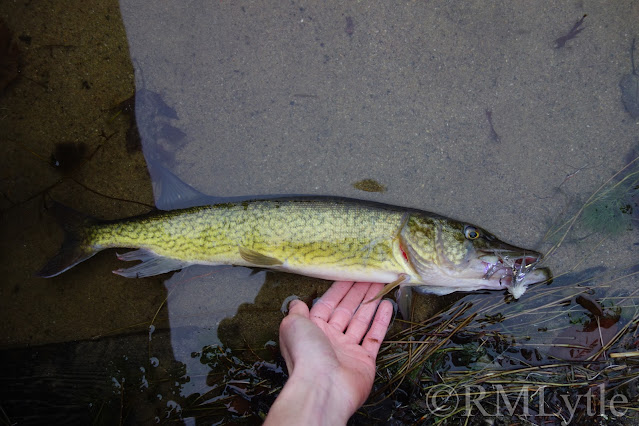 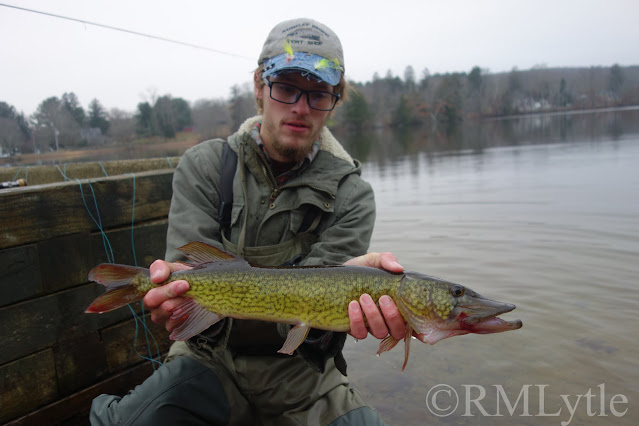 No trout were caught by either Noah or myself. That ended up being my last fish of 2021. It was a fitting end, as I've struggled for the last two years to actually land a trophy pickerel despite hooking quite a few. Huge pickerel on the fly has long been and interest of mine, and these fish didn't satiate the need so much as they exemplified it. What I really want is to catch pickerel so preposterously large that even the sort of angler that doesn't care to target the species would be impressed. Hopefully 2022 will be my year for that.

Fish for the love of fish.
Fish for the love of places fish live.
Fish for you.
And stay safe and healthy.
Thank you to my Patrons; Erin, David, John, Elizabeth, Brandon, Christopher, Shawn, Mike, Sara, Leo, C, Franky, Geof, Luke, Streamer Swinger, and Noah for making Connecticut Fly Angler possible. If you want to support this blog, look for the Patreon link at the top of the right side-bar in web version.
Posted by RM Lytle at 4:29 AM