Monster Carp on The Fly at Night

Quick reminder: I'm doing a talk this coming Thursday, August 11th, at 7:00pm at the Middle Haddam Library on fly fishing for Connecticut River Carp. It should run about an hour, I hope to see some of you there!

The Hex hatch is a CT summer featurette. It's tough to pinpoint, devilishly so, and doesn't last. If the conditions aren't just so there often aren't even that many fish feeding on it. When it does come together though, wow is it ever magical. The water boils with a multitude of fish species frenzying on the huge mayflies. This year, so far as I do occasionally run into later August hatches, the fishing has been average, which is to say an exciting experience but not one that resulted in a significant number of notable catches. Last year was subpar but one night yielded giant crappies slurping spinners, which was just incredible. This year it was mostly average sized white perch and smallmouth bass making up my catch each night. With one exception.

I always linger after the hatch, especially early in the event. If it's marginal, the nymphs will often swim for a little while after the ones that are going to emerge do so. It's slower, slightly less exciting fishing but It has produced some of the larger fish. One night, I was standing under a streetlight casting  Pat's Rubber Legs- an un-ideal but passable hex nymph imitation -when a shadowy form emerged from the depths into the lit area. It was a carp, a decent sized one at that. I let it approach then presented my fly to it. It moved forward and flaired its lips, so I set. I was into something solid. Too solid, I thought, it felt snagged. I started to attempt to detach the fly, knowing full well the carp was going to spook off. It left fairly passively, which was odd. Suddenly, line was coming out of my had. "Oh, she is on" I muttered aloud. The fish left with patient autority, buckling my 5wt but in no real rush. I knew it was big, though at that point I wasn't quite sure just how big. 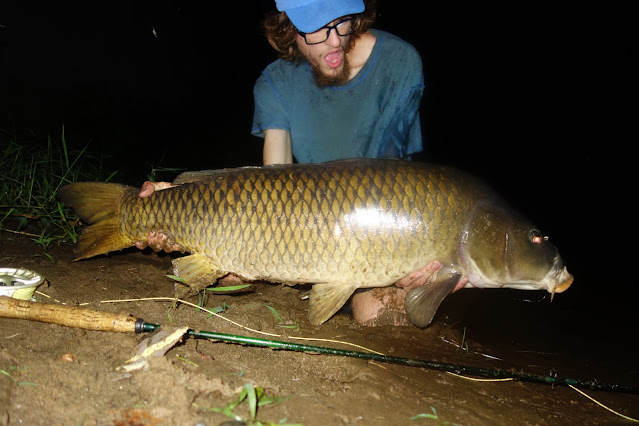 Yeah, uhhh... she was huge. She was actually tough to lift. I've only had that issue with a small handful of carp. I suppose the takeaway here isn't extremely clear, so in case that's true: keep fishing. You can't always predict when a trophy fish is going to present itself. Some are a result of fishing hard, planning, predicting... and then others just sorta happen. In either case, you can't be sitting at home. Fish when you can, always.

Thank you to my Patrons; Erin, David, John, Elizabeth, Brandon, Christopher, Shawn, Mike, Sara, Leo, Franky, Geof, Luke, Noah, Justin, Sean, Tom, Mark, and Jake for making Connecticut Fly Angler possible. If you want to support this blog, look for the Patreon link at the top of the right side-bar in web version.