The wall seems all that much longer on hot summer days. The sun beats down, making me sweat, and the wind dries that sweat right away. The two conspire to suck the moisture clean out of the weary anglers very skin. Guzzling water is the only thing that staves off possible disaster. When the tide is down the best move is often to go all the way to the end. That's almost a mile- completely exposed, no shade, no cover at all. Going halfway sucks. Going all the way feels stupid; especially in this early season when the fish might not even be there.

The fish are bonito. Atlantic bonito arrive earlier in the summer, often August but sometimes July. More ethereal than little tunny are these days, there's even less assurance that there will be good numbers of bonito any given year. There could easily be very few, there could be hundreds. The good news in my experience is that they will eat pretty readily most of the time if they are there. It may take minor presentation adjustments, but bonito will take bigger flies, often a little more impressionistic ones, sometimes the feeds are a bit more sustained. I've seen a small bonito eat a 6 inch long Deceiver. They have substantial teeth, which they seem to use to chop up somewhat larger baitfish. Well, they seem easy when they're around. But if they aren't around....

Some days the chop on the water serves to conceal signs of life. That chop also often makes the fish stupid easy. That's always been true of tunny for me, and I think bonito as well. It makes it hard to see them though, and when there's big question as to their presence or absence that causes a lack of confidence. This day the chop and swell are significant, I really can't tell if fish are breaking at all. Maybe they are, maybe they're hiding behind the swell. Maybe some of those white caps are actually bonito cresting over the waves. Probably not though. Could I effectively fish I'd be able to answer that question, but there's a thick line of weeds that prevents me from getting a fly through the water clean. Bits of reddish brown gunk cling to it after each cast. This may just be a waste of time.

Bored yet stubborn, I wait for some sign of life. I sit on the rocks, scanning. Birds cruise by, also scanning. I always wonder how the chop and breakers effect their ability to find fish. I'm sure less so than it does me, but I've watched them lose track of the fish plenty of times. They have an especially hard time with hardtails. Out of the corner of my eye I catch something. A break maybe? I can't be sure. My mind plays tricks on me when it's like this and I've been out for hours, just waiting.

It does get better when I can actively fish. I don't have a heavy sink tip with me this time which negates the possibility of dredging g deep and picking up some seabass, scup or fluke. I try to let my intermediate get deep but that just isn't what it's made for. All there is to pass the time is watching boats. I observe how they're fishing. Everyone today seems to be drifting and jigging. Nobody is chasing birds. I don't think any of the boats are targeting the fish I'm after. I still watch, seeing if some devote significant time to drifts I've not fished. I don't know what they're after, fluke or scup probably. I take note regardless. Maybe some know something I don't. It's always worth paying attention to those things.

Suddenly, there, near the fish trap... that was a fish, it had to be. I train my eyes on the area, watching intensely and squinting through the glare. I'm sure that was a fish, but will it show again? After some time passes I scan further from where I spotted the break. It can't be that close to where it was by now. Is there the slightest but of hope that I'll see it again? Not a prayer. It has vanished into the sea, a mere figment of my imagination. I don't think it even was a bonito after all. 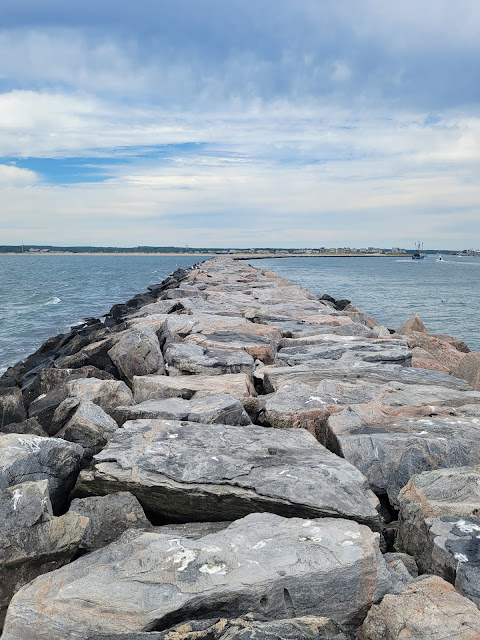 Thank you to my Patrons; Erin, David, John, Elizabeth, Brandon, Christopher, Shawn, Mike, Sara, Leo, Franky, Geof, Luke, Noah, Justin, Sean, Tom, Mark, and Jake for making Connecticut Fly Angler possible. If you want to support this blog, look for the Patreon link at the top of the right side-bar in web version.