Bluegills in a Blizzard

Sometimes I just have to say screw it and go fishing regardless of the weather. I’ve basically been doing this professionally, anyway. Neither snow nor sleet nor heavy rain nor tornado warning has kept me off the water. Frankly I enjoy fishing in bad weather. It excites and rejuvenates me. And if I’m honest, it also makes me feel at least a little bit badass. So when Connecticut was being pummeled by a gnarly snowstorm on the first of February, I was going fishing. I wasn’t going to drive anywhere, it was too nasty. I wasn’t going to fish open water either, I just didn’t feel like it. I was going ice fishing. The closest options are all pretty mediocre hardwater fisheries. There are plenty of fish in them, they just seem trickier to ice fish than other bodies of water I’ve been on. But there was one place that was as near a guarantee as I could get and it was within walking distance.

So I set out into the winter wonderland. The howling wind blew both the snow that was falling and that which was already on the ground. I could hear plow trucks in the distance and the wind in powerlines and trees, but not much other than that. In about 15 minutes I was at my destination. Spudbar in hand, I cleared a bit of snow from the inside of a vertical concrete tube about four feet in diameter. Then I spudded a hole in the 5 inches of ice underneath that. I then lowered my little tungsten jig down there. A few minutes later it came back up with a bluegill attached. A few minutes after that I got another. They were all tiny, but I’d caught some fish and that’s all I really needed. 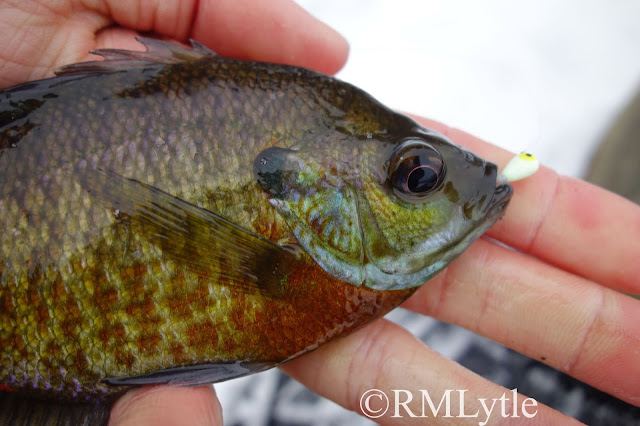 I looked out over the rest of the pond this little weird culvert-like pipe was in. Streaks of snow whipped across the ice. I’d never caught much any time I tried to fish any other spot in this place. I briefly considered trying along the dam somewhere, but decided to head back home. 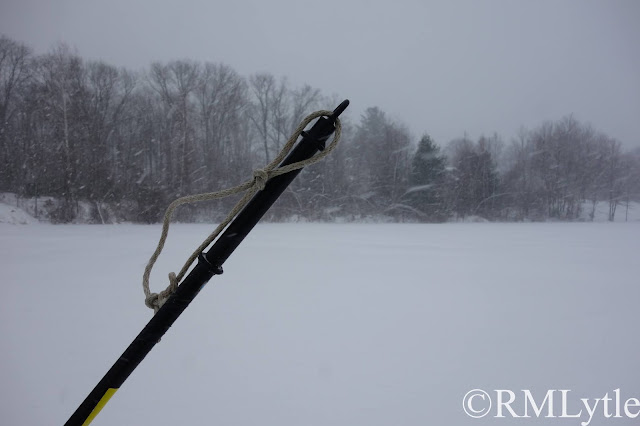 I walked back in my own footsteps. Though they weren’t even 45 minutes old, they were already just shapeless potholes in the ever deepening snow.

Fish for the love of fish.
Fish for the love of places fish live.
Fish for you.
And stay safe and healthy.
Thank you to my Patrons; Erin, David, John, Elizabeth, Brandon, Christopher, Shawn, Mike, Sara, Leo, C, Franky, and Geof for making Connecticut Fly Angler possible. If you want to support this blog, look for the Patreon link at the top of the right side-bar in web version.
Edited by Cheyenne Terrien
Posted by RM Lytle at 4:27 PM