Spottail Shiners and White Perch Through The Ice

I like variety... if that wasn't already clear to those of you that have been reading my musings for a while. Size doesn't matter all that much. Though I love big fish, I love small fish too. I want need to catch both. Winter is generally lacking in species and size diversity in Connecticut, especially compared to spring and late summer into early fall. Mostly I'm catching brook trout, brown trout, bluegills, and yellow perch all winter. Sure, some of those might be trophy sized individuals, but after a time I want something different, even if it's tiny. It was for that reason that I wasn't at all disappointed when my friend Rick and I set up over likely crappie territory but instead started pulling spottail shiners up through the ice. 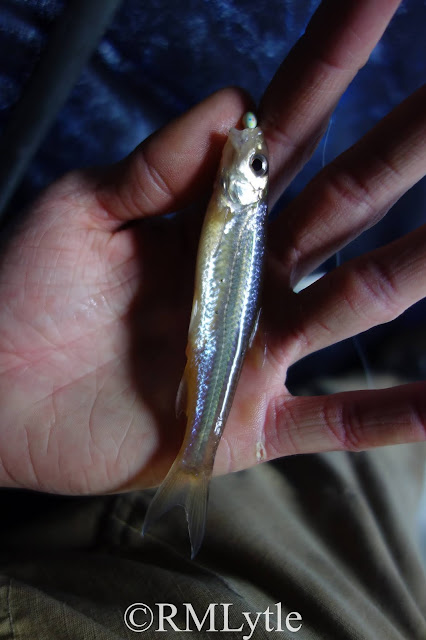 It was a cloudy day, we had a rising tide, and it seemed like really good conditions to get some large crappies. I don't think we ended up getting even one, but we had steady action from other species. The shiners came in waves. There'd be long lulls interrupted by flurries of constant nibbles. I'd started out with plastics but just wasn't sealing the deal with them so switched to spikes instead. That worked well. 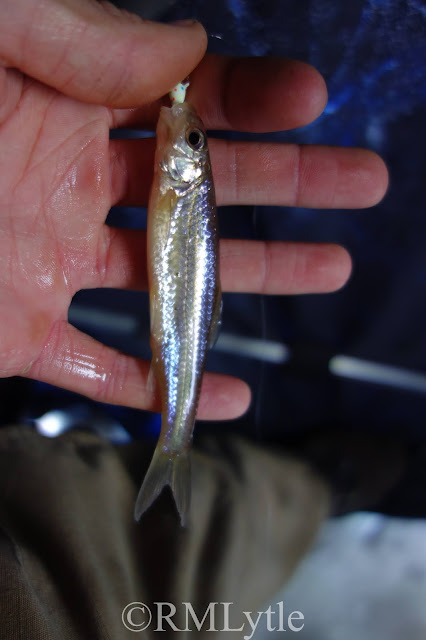 We tried moving around to see if we could get on top of a school of crappies. Our third pair of holes was the most interesting. Though they were only about two feet apart, I was reaching bottom about a foot before Rick. We were definitely on some sort of structure- what, exactly I wasn't sure. This was, unsurprisingly, the best hole of the day. Though it did produce lots of shiners and a couple bluegills, white perch were the headliners. I'd caught only a couple through the ice prior and I didn't get that many to add to that total. One of them, though, was pretty darn nice. Long, fat, and full of fight, it outclassed every other fish I'd caught that week by a wide margin. Big white perch fight really hard. I have quite the soft spot for them. 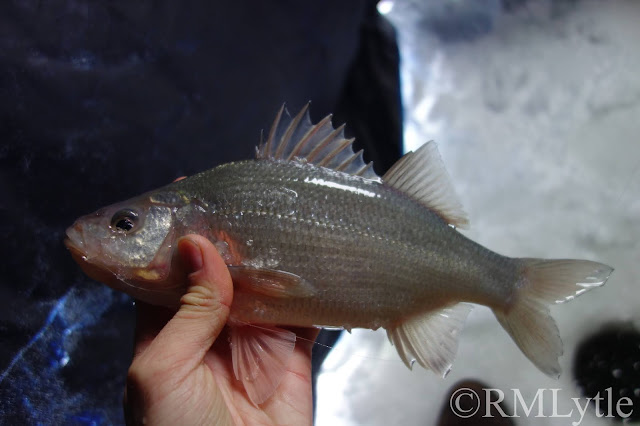 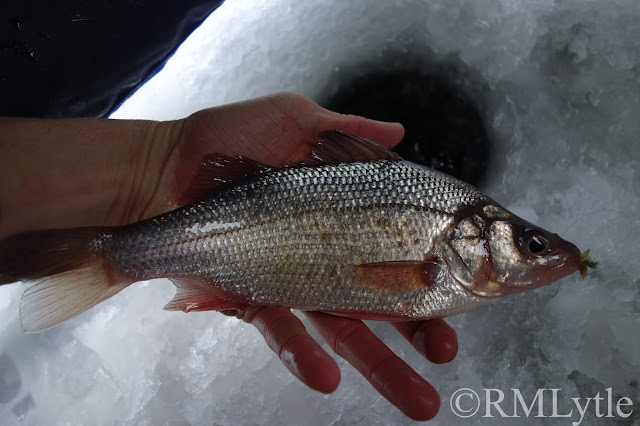 So, although this day didn't give up what Rick and I had hoped for it was a respite from what I'd been experiencing. Over the coming week or so I'd get a little bit more variety, and some bigger fish as well. For those of you who aren't that interested in the ice fishing posts, I'll mix in some more recent trout outing for, well, variety.

Fish for the love of fish.
Fish for the love of places fish live.
Fish for you.
And stay safe and healthy.
Thank you to my Patrons; Erin, David, John, Elizabeth, Brandon, Christopher, Shawn, Mike, Sara, Leo, C, Franky, and Geof for making Connecticut Fly Angler possible. If you want to support this blog, look for the Patreon link at the top of the right side-bar in web version.
Edited by Cheyenne Terrien
Posted by RM Lytle at 6:47 PM