Big Smallmouth, Walleye, and the Importance of Chartreuse & Yellow

With late winter/early spring rain comes my first real shot at large walleye on the fly in my area. This is one of my favorite times of year, when getting big fish on the fly becomes a regular occurrence again. I've gotten more and more into targeting trophy specimens of each fish species I regularly fish for, and consistently getting large walleye on the fly is one of my proudest achievements. With the weather perfect for it on March 26th, I set out just after sunset confident something exciting would happen. But before I could catch a walleye, a big swirl in very shallow water drew my attention. I had on a woolly bugger with a yellow tail, chartreuse body, and white hackle, a fly that I could not lie without. I dropped it where the swirl had been and quickly felt a grab. It didn't feel like a walleye, and was soon airborne to prove that it most definitely was not... I don't think walleye actually jump, but smallmouth bass sure do. My first smallmouth of the year was a pretty damn good one. 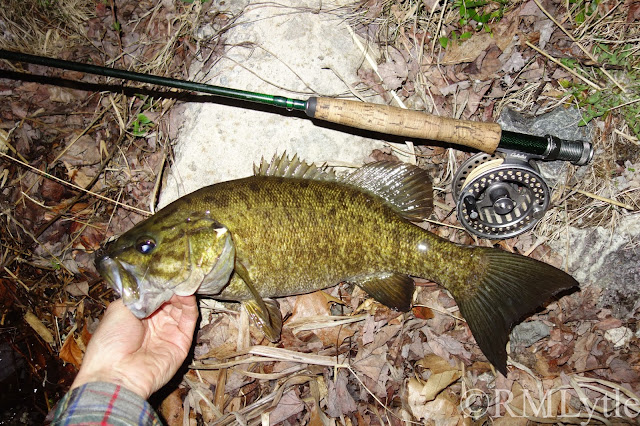 Though the yellow & chartreuse Woolly Bugger is primarily my choice for big walleye and crappie, it has produced many big smallmouth bass, largemouth bass, and some bullheads and carp as well while night fishing. It loses some of its charm in daylight, which isn't all that surprising. But for whatever reason between the time the sun sets and before it comes back up again, there are few flies for freshwater "warmwater" species that will draw quite as much attention.

On to the task at hand: get the first walleye of the season.

It didn't take that long. The fish was right along the contour I'd expected, ate just like a walleye should, and gave the slow, head-shaky fight most walleye perform. It was a typical one for this spot but a nice walleye for the fly rod. I rarely see big fly tackle walleyes, most seem to be around 18". My average is 23". Much of my success can be chalked up to living right near a spot where large walleye routinely move into very shallow water. 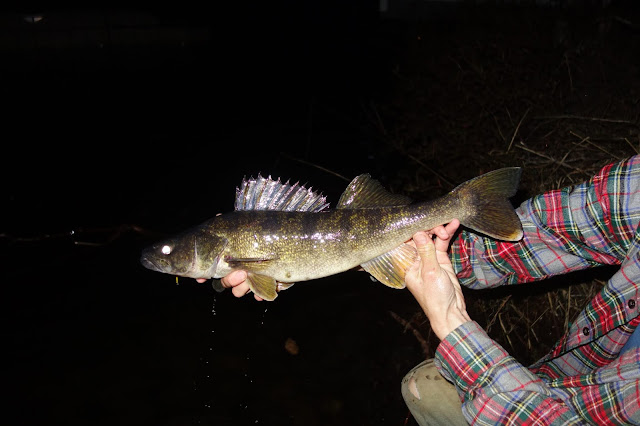 That was the first, but a couple weeks later it is still my only walleye so far this season. This season is off to a slow start. Smallmouth and the huge early season crappies though? Very different story; stay tuned.

Fish for the love of fish.
Fish for the love of places fish live.
Fish for you.
And stay safe and healthy.
Thank you to my Patrons; Erin, David, John, Elizabeth, Brandon, Christopher, Shawn, Mike, Sara, Leo, C, Franky, Geof, Luke, and Noah for making Connecticut Fly Angler possible. If you want to support this blog, look for the Patreon link at the top of the right side-bar in web version.
Edited by Cheyenne Terrien
Posted by RM Lytle at 9:24 AM