The Agony of Swinging Steelhead

I picked Noah (Garth) up well before the sun rose and we started the drive to western New York. Our destination was the famous Salmon River and our target was steelhead. Perhaps more precisely, our target was lake run rainbows whose ancestors were steelhead. I’d fished the Salmon River twice already and caught steelhead on both trips, but this time it was my trip. Noah had never been, he had never fished for steelhead at all. This trip would put him closer to a salmonid over 30 inches than he’d ever been. Even though I’d been already, I had very little experience. This trip would test me. It would be my first real foray into Great Lakes steelheading.

We got on the water around 9:00am, leaving us with most of the day to explore water that would mostly be new to both of us. We didn’t know exactly what to expect, other than a struggle. Winter steelheading pretty much always is. It would be especially so for me because I decided to dedicate myself to swinging. I faltered only a couple of times and fished with an indicator or sight cast with small streamers, but for the most part it was just big flies and spey casts. My other goal was to fish away from the crowds, outside of Altmar, and we managed to accomplish that. We walked a lot, though we didn’t actually need to. At times we found water devoid of fisherman right around the bridges. 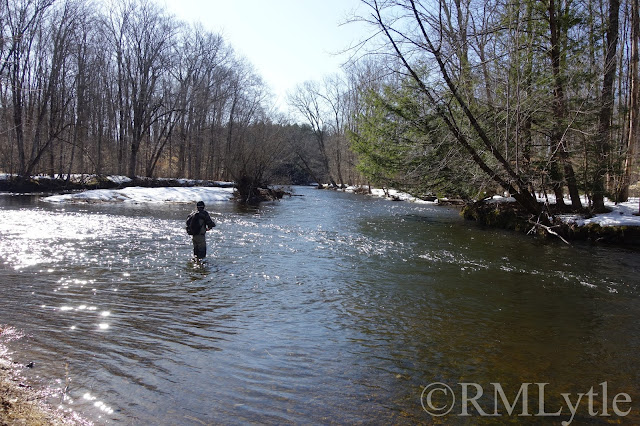 The weather was pleasant. It was only cold in the morning, and we took wading breaks because the water certainly wasn’t warm. The sky was clear though, and I didn’t think that helped the fishing. Yes, the fishing was slow. Very slow. We saw two other anglers hook fish and we saw steelhead, most of them tucked into log jams. We were struggling though, and by the evening of that first day I was expecting to skunk. 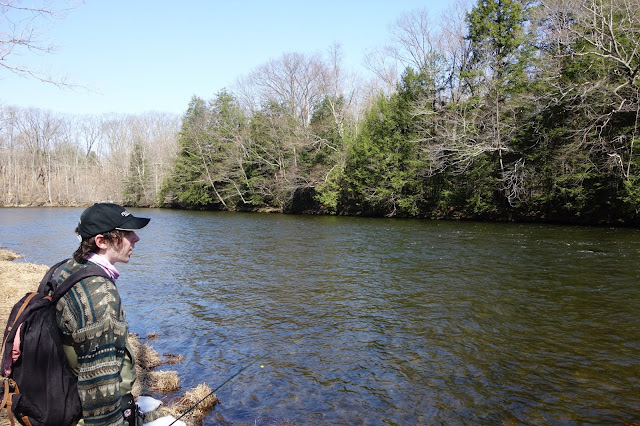 Then, in the most promising run we found that day, I abruptly came tight. The fly was an olive and purple marabou pattern, a swing fly I’d had a steelhead take and caught a couple kings on back in the fall. The fish grabbed at the tail of the run, in a classic spot. I registered the take with astonishment, set the hook hard, and my spey rod doubled under the weight of a grumpy steelhead. Then I f’d up. The fish came to the surface and began violently head shaking, but I kept the rod high. The fly came out, and my heart plummeted. 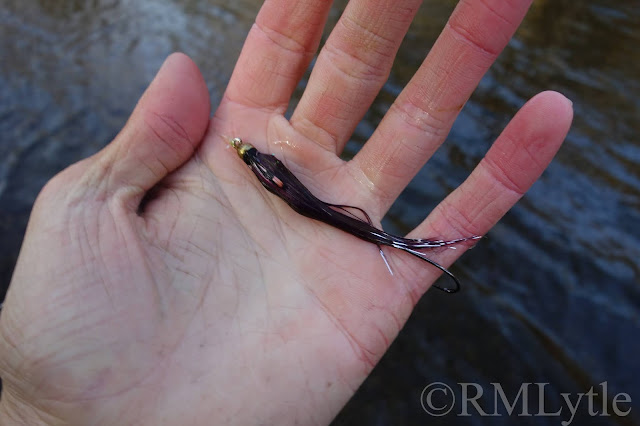 It’s hard to express that feeling. Most people who don’t fish would just think it’s silly. But it was pure agony. I felt this deep sense of loss for the rest of the trip. We never came close to getting another steelhead. But that’s the game, and I’m proud that I managed a grab on a big fly when nobody was doing all that well, regardless of tactics. That certainly is a very bitter consolation though. I need to do more of this steelheading thing.

Fish for the love of fish.
Fish for the love of places fish live.
Fish for you.
And stay safe and healthy.
Thank you to my Patrons; Erin, David, John, Elizabeth, Brandon, Christopher, Shawn, Mike, Sara, Leo, C, Franky, Geof, Luke, and Noah for making Connecticut Fly Angler possible. If you want to support this blog, look for the Patreon link at the top of the right side-bar in web version.
Posted by RM Lytle at 3:06 PM