After catching my big early season pike and spending a bit more time figuring out that very little else was likely to come out of the same spot that day, Noah and I switched gears to target something smaller. We visited an early season crappie spot where I had some great success a few years ago around the same time of year. Upon arriving we discovered that although panfish seemed entirely absent, carp were present and seemed to be feeding.

I’d seen carp at this spot before, including what looked like the same large orange koi we could see on this day, but had never caught any. Granted the effort I had put in wasn’t all that strong. But this time I decided to really give them a try, especially since they were all that was present. Early March is indeed when I get the first carp of the season most years, so it would be a shame not to start out 2021 strong seeing as carp are one of the fish I intend to regain some proficiency with this year. I started out doing what I typically do for carp, sight casting with a weighted fly. I may have had one take doing this but distance, visibility, and current were giving me a hard time. I decided to do something I’d never really tried before for carp. I’ve seen videos and heard people talk about using strike indicators for carp fishing. Seeing as I’d barely ever indicator fished for most of my fly fishing career, but suddenly started doing a whole lot of it last year, I decided to branch out with the methodology even further.

One of the reasons I’ve often objected to trying indi rig carping was the vertical nature of the presentation. I’ve often felt that a vertical tippet puts off carp because it is more likely to be felt by the fish when it attempts to eat the fly. I’m still not sure I’m wrong about this, but spending more time indicator fishing for species with similar feeding inclinations, like redhorse and white suckers, has put a bit of doubt in my mind. Granted carp seem more line-shy than both of those species, but I doubt the sensitivity of their mouths and faces is all that different. That was the main reason I’d not already tried it. Since detecting strikes was my main issue in this situation I decided to ignore that.

I tied on a small chartreuse jig fly, size 10 with a tungsten bead, on 4x tippet and 3 feet under a Thingamabobber. It was a bit surprising how little time it took to get a bite. I could see the fish in the water but would not likely have seen the take. The indicator dropped with authority, though, and I was immediately faced with a problem. We were fishing in a spot with a substantial stone wall dropping into the water, with trees to our left and some remaining ice in front of us. I managed to get around the first tree before deciding to try to drop carefully onto the ice to get around the second one. The ice didn’t break when I stepped on it, but instead started to push out away from the edge. In comically slow fashion I’d become stuck with my back against the rock wall and my feet on the ice, scrambling to get back up on the wall unsuccessfully while still fighting the carp. I fell in, inevitably, but only up to my knees. I scrambled back onto the wall and tried to re-evaluate. Weirdly, getting on the ice still seemed like the best plan. I used my foot to get the ice back against the edge and stepped back onto it, this time without pushing it out. I walked around the tree and promptly broke through the ice. Now accepting that I’d be spending the rest of the fight in the water, I maneuvered to fish around the ice and eventually caught it. 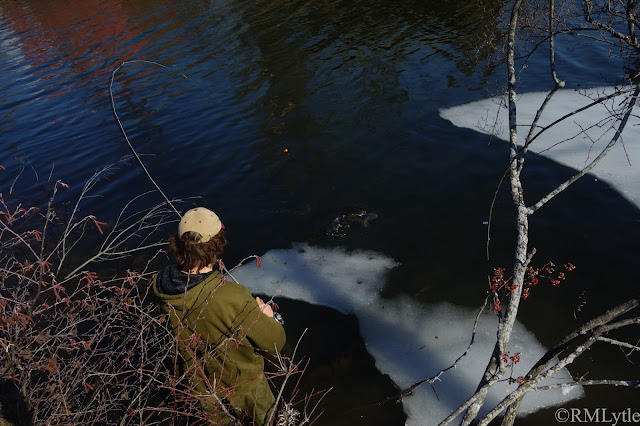 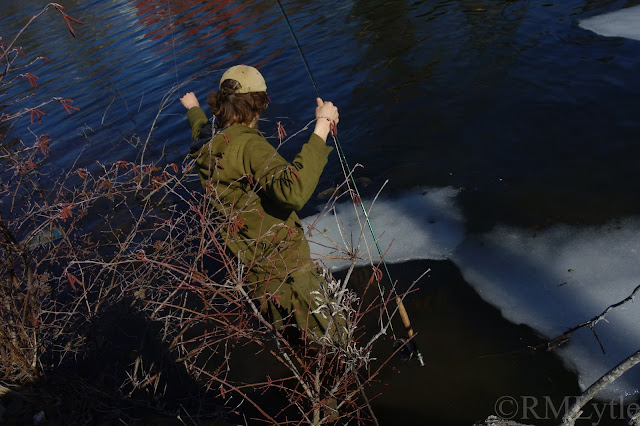 That was about as chaotic a battle as I’d ever had with a carp that weighed, in all likelihood, less than 10 pounds. But after a winter of very minimal big fish success, catching both a nice pike and a common carp on the same day was exhilarating. Noah took some shots for me before I released the fish and climbed back up onto dry land. I was very glad I’d kept the waders on. We stuck around for a while trying to repeat this success but weren’t able to get another bite. I’d landed the first carp of the year though, and was very pleased. 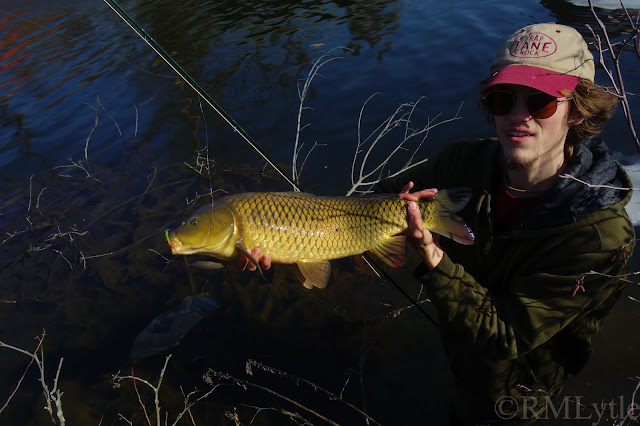 Fish for the love of fish.
Fish for the love of places fish live.
Fish for you.
And stay safe and healthy.
Thank you to my Patrons; Erin, David, John, Elizabeth, Brandon, Christopher, Shawn, Mike, Sara, Leo, C, Franky, Geof, and Luke for making Connecticut Fly Angler possible. If you want to support this blog, look for the Patreon link at the top of the right side-bar in web version.
Posted by RM Lytle at 7:48 AM