One notably unpleasant day in February, Rick invited me for a run up to Massachusetts to fish a well known crappie and perch hot spot. A gusting Northwest wind would prevent comfort out in the open, so it was a really good thing Rick had both shelter and a portable heater. We set out, brimming with confidence and some idea of what to expect since Rick had just fished the spot a few days prior. 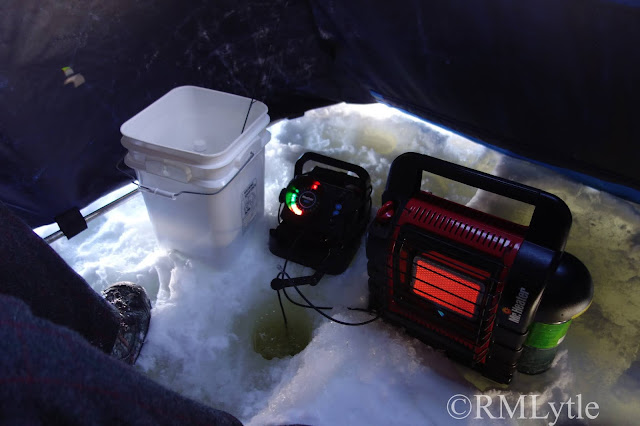 Trophy panfish seems like an oxymoron to some fishermen. I’ve met a few folks that turn up their noses to bluegill, crappie and perch entirely. This runs contrary to my own opinions of those species. Panfish, large ones in particular, are something I borderline obsess over. That’s why it’s fun to fish with Rick, he will never shy away from a good panfish bite. Having ice fished for them all over the northeast for many years, he also has far more experience than I and I value the knowledge I’ve been able to pick up from him. Still, neither of us is good enough to catch every time we go out though, still. And that’s part of what keeps panfishing exciting. It isn’t as simple as just going out and jigging on a body of water that holds the species.

On this day we never fully got a grasp on the bite. There were fish under us sporadically throughout the afternoon and evening and we were able to get bites sometimes. However, they were not, for the most part, the sort of bites we were looking for. Most of the fish caught were small sunfish, perch, and spottail shiners. After spending a while at the first set of holes we moved over just a short distance. Immediately we had marks under us and promptly each caught a crappie. Mine was a slab. It wasn’t as big as we were really hoping for at 12 inches and change, but it had shoulders and was certainly a good fish. 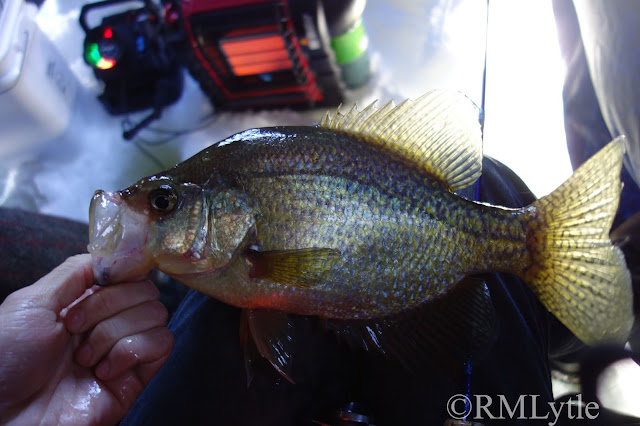 We thought it was on, but we didn’t get another crappie all evening. From right around sunset on we even had loads of big marks beneath us, a huge school of fish. We could sporadically get them to follow but they seemed to have no interest at all in eating anything we tried to feed them. We can’t be sure what species these were since we didn’t catch one, but it certainly was befuddling. This is exactly what keeps fishing engaging for anglers like Rick and I: we want to either figure out how to catch these fish or figure out how to know when it isn’t possible. One fish, a pretty good one, made the trip, but it was those that we could see on the flasher but failed to fool that made me want to figure this spot out.

Fish for the love of fish.
Fish for the love of places fish live.
Fish for you.
And stay safe and healthy.
Thank you to my Patrons; Erin, David, John, Elizabeth, Brandon, Christopher, Shawn, Mike, Sara, Leo, C, Franky, Geof, and Luke for making Connecticut Fly Angler possible. If you want to support this blog, look for the Patreon link at the top of the right side-bar in web version.
Posted by RM Lytle at 4:44 AM